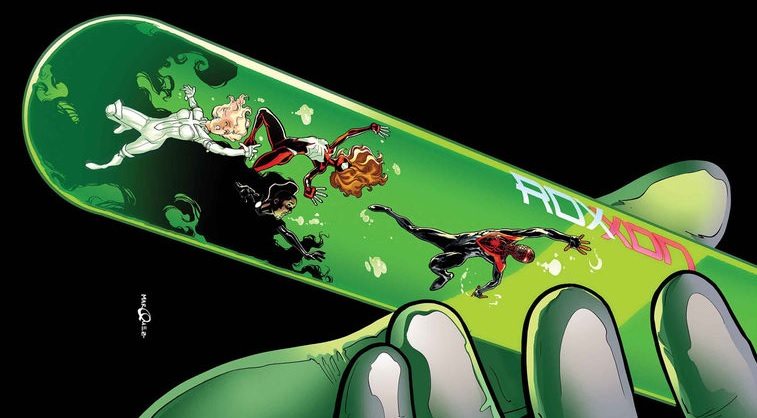 A lot is left hanging in the balance at the end of Ultimate Comics Spider-Man #28, which marks the end of the series in its current iteration but promises further adventures for its eclectic cast of characters. Marvel’s Ultimate Universe has been rumored to be on its last legs for a while now and the conclusion of one of its flagship titles all but drives the nail into that proverbial coffin. But Ultimate Spider-Man #28 doesn’t necessarily feel like the be-all-end-all issue of the series; writer Brian Michael Bendis clearly has plans for Miles Morales. Considering the quality of writing that Bendis has produced throughout this series, the fact that the character has longevity moving forward is definitely not a bad thing.

Bendis has been building the confrontation between Miles and the Roxxon Corporation since the beginning. Roxxon has been the behind-the-scenes big bad of the series since Miles took over the mantle of Spider-Man and it’s never been as apparent as it is here when Mr. Roxxon himself reveals each involvement his company has had in Miles’ life throughout the series. As expected, Bendis delivers a climatic battle as Miles and his friends (Spider-Woman, Cloak and Dagger, and Bombshell) invade the Roxxon Corporation building, and the fight couldn’t be more one-sided. It’s not exactly the epic showdown that Bendis had built up prior to the issue. On the plus side, however, the quick finale does manage to showcase all of the other heroes, each of whom is given their own showcase moment.

David Marquez’s art has proven to be just as perfect for this series as Sara Pachelli that came before him, and the triumphant moment where Miles stands as Spider-Man in a full-page spread is evidence of that. Yet Marquez’s artistic talent is somewhat subdued in the fight sequences as most of the action takes place within incredibly small panels (in order to fit all of the characters’ individual moments) against bland sunburst backdrops. Justin Ponsor’s colors are particularly strong this issue, but the choice of simple colored backdrops gets repetitive quickly. Also, the choice to dedicate fourteen panels of Mr. Roxxon hanging upside-down in Spider-Man’s webs as he unveils his entire master plan is not only a narrative letdown, but an unnecessary use of Marquez’s abilities too. As much as this issue ultimately feels like the end of an arc rather than the series as a whole, it’s nevertheless a reminder that Ultimate Spider-Man will be missed.