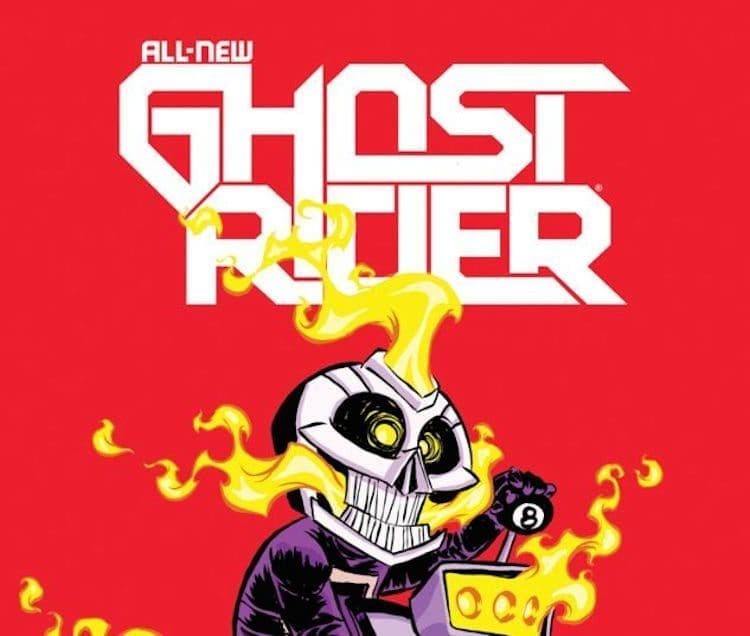 Ghost Rider is one of those characters in Marvel’s stable of superheroes that’s easily recognizable to even the non-comic reading public; having a flaming skull for a head will bring such notoriety. Yet his relevance has waned considerably over the last decade with two mediocre mainstream movies certainly not helping to keep the name “Ghost Rider” favorable in the eyes of the public. That hasn’t stopped Marvel from constantly trying to reinvent the character, though their efforts have gone by largely unnoticed. For instance, did you know that the most recent incarnation of the character was a Nicaguarian woman? Probably not. All-New Ghost Rider #1 is another attempt to reinvigorate the character, and although it’s the most interesting the character has been in quite some time, it still has many miles to make up if it wants to make a lasting impression in the long run.

One of the first substantial changes readers will notice is the person taking the mantle of Ghost Rider this time around is not the stunt-man-turned-Devil’s-servant Johnny Blaze, but rather Robbie Reyes, a down-on-his-luck Hispanic auto repair shop worker living in a gang-ridden suburb. Robbie is established in this inaugural issue as a perpetual hero to his wheelchair-bound and mentally handicap brother, Gabe, and the drive for Robbie to leave the dangers of his neighborhood—where gunshots ring out on a nightly basis—is the strongest element that writer Felipe Smith brings to this new origin tale. Smith implements a few interesting alterations to the latter-half of the issue that includes changing Ghost Rider’s signature vehicle from a motorcycle to a souped-up muscle car, though the majority of the script is considerably less memorable, falling a little too closely in step with scenes right out of The Fast and the Furious. Not to mention the issue comes to an all-too abrupt and unnatural end just when the plot is at its most intriguing, which is a real bummer.

On the upside there’s Tradd Moore’s interior art, which is something special. It’s likely to be a divisive choice for a character known as being so bulky and larger-than-life, but the off-kilter character designs that Moore uses helps to shape this new version of the character for the better. Most of the characters are drawn with elongated bodies, arms, and faces, lending a certain surrealistic look to the issue, but one that is certainly different than what has come before it in the Ghost Rider pantheon. Colorists Nelson Daniel and Val Staples do a fantastic job at rendering Moore’s frantic pencils, specifically in the sequence in which Robbie becomes the eponymous Ghost Rider. As long as this trio of artists and colorists remain on this title, All-New Ghost Rider is bound to be the one of the most visually stunning books in Marvel’s current lineup.

All-New Ghost Rider promises, “this is not the Ghost Rider you know” and based on this first issue, that’s extremely accurate. However, it shares a bit too much with other plot elements we are familiar with, keeping it from being truly unique but nevertheless a great read and a must-buy even for those that tend to shy away from the character normally.