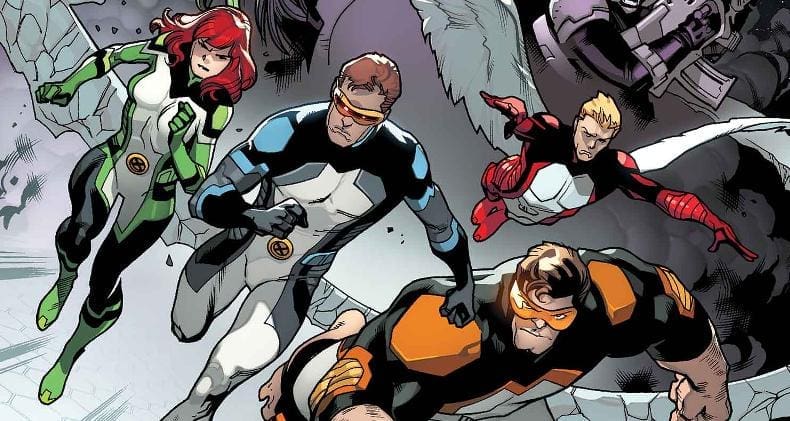 Brian Michael Bendis’ All-New X-Men #22.NOW is poised to be the perfect jumping-on point for readers looking to experience an all-new crossover event called “The Trial of Jean Grey” with one of Bendis’ other books, Guardians of the Galaxy. Given the storied past of the X-Men just in this book alone, this issue delivers on its promises as best it can, though don’t think the giant #1 plastered on the cover means cleaning out the X-Men closet entirely. This issue still is the twenty-second issue of the series, after all, and although Bendis tries to ease new readers into the goings-on of his group of displaced X-Men with his brand of long-winded but humorous panache, there’s going to be a lot of head-scratching before the real dilemma sets in. As with all-things X-Men at Marvel, there’s a lot of baggage to unload.

Bendis delivers his usual dialogue intensive pages from the outset, leaving room for the conflict of the issue to materialize more naturally. Young Jean and Young Scott have a lot to work out, particularly when it comes to Jean not being open about her feelings of watching her older self die and her penchant for reading others minds. Young Angel is used as the awkward third-wheel baring the brunt of the animosity between his bickering brethren, and his reactions are immensely entertaining. However, even Young Angel attempting to scarf down a burger in peace cannot hold a candle to Young Ice Man, who spends a good deal of this issue singing Run DMC while making snow angels. It’s just the lighthearted kick the book needs to counteract the attack from the Shi’ar and their kidnapping of Young Jean. Oh, and the Guardians of the Galaxy show themselves too, just to remind readers where to look for the next chapter of this story.

Stuart Immonen is an artist that makes me want to pick up All-New X-Men even when it’s not involved in an epic crossover. His emotive figures sell the ever-changing mood of the issue, whether it’s Angel’s shock of being accosted mid-chew or the anger on Young Jean’s face as she argues with Scott. Immonen’s furtive details are best realized in his action sequences though, like when Shi’ar land in front of the Cyclops’s New Xavier School and blow the heck out of out of jolly ‘ol Ice Man. Marte Gracia’s colors compliment Immonen’s large-scale sequences exceptionally, pumping a blue-hue to the midnight attacks that make up the latter half of the book. Although this team draws a great bunch of X-Men, I can’t wait to see them tackle the Guardians of the Galaxy a bit more down the line.

All-New X-Men #22.NOW is a silly title but it’s a reasonably fresh start to an brand-new storyline. Even if you haven’t been keeping up with the title regularly, this issue is not so overwhelming that new readers should feel like they’re on uneasy ground moving forward.

Expanding the “Star Wars” Universe One Book at a Time

MARVEL’S “GUARDIANS OF THE GALAXY” TRAILER TO WORLD PREMIERE ON ABC’S...