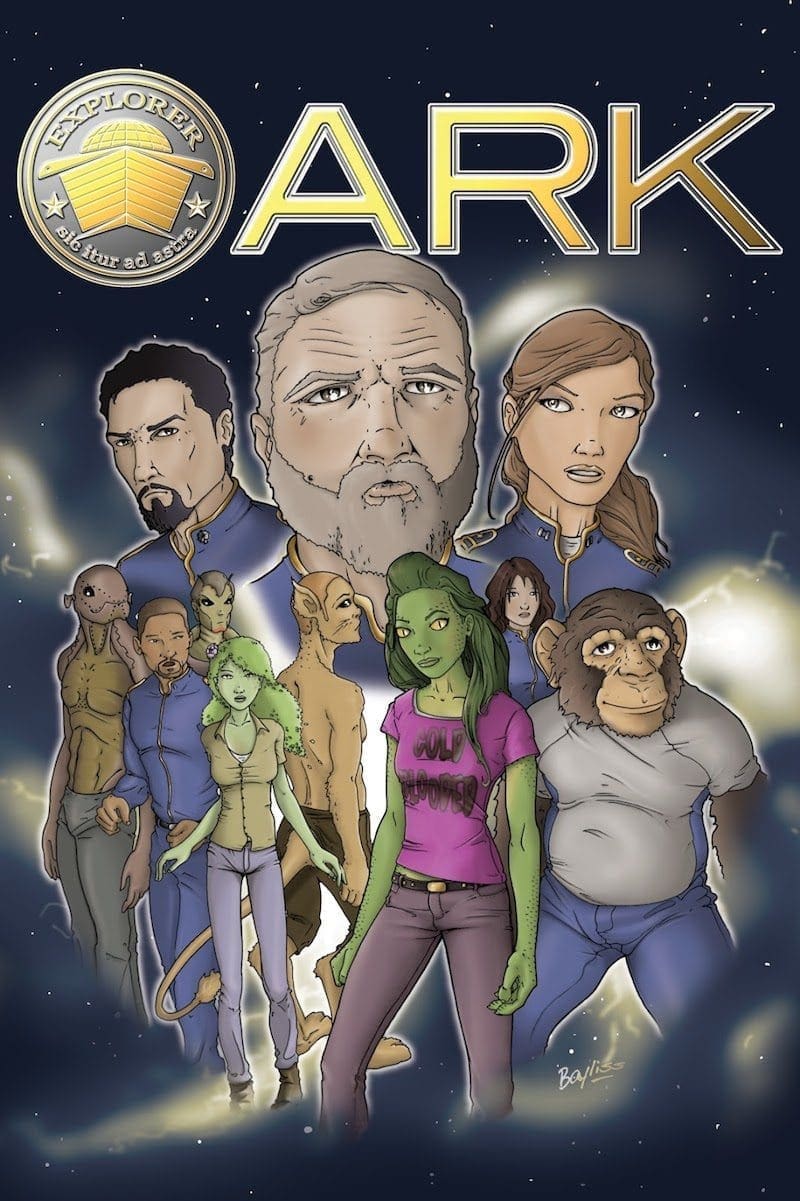 Great science fiction is able to hone in on elements of its narrative more attuned with current societal woes rather than mind-blowing technological advancements, and in this way, the graphic novel Ark from Arcana Studios succeeds. Ark’s futuristic premise—that of a spaceship carrying both humans and ethereal beings through space toward an unknown destination–is merely a conduit to deliver a strong parable about social equality and race relations within the current world climate. As his graphic novel races at a tremendous pace toward its satisfying conclusion, writer Peter Dabbene offers us some semblance of a hopeful resolve despite the numerous hardships his characters face along the way. Ark works extremely well in its current form as a standalone science fiction tale, but I cannot help but feel that Dabbene has so much more left to say within this world.

Naturally, the biblical implication of the title Ark cannot be overlooked and there certainly are parallels between the two stories. Yet when Dabbene strays from the otherwise well-worn tale, the plot diverges into a completely fantastic and entirely unexpected murder mystery. While I obviously won’t spoil the details, the darker tone that Ark takes about a quarter of the way through is well-timed and threatens to tear down the already tenuous coalition between the ships inhabitants:  humans and “meta-humans,” who are essentially gifted aliens (think mutants). You’ll know the moment where the plot turns on itself, trust me, and after it does, the tension is kept taut and there’s hardly a lull in the rest of the novel. Only one moment toward the end of Ark is ill timed, and it has to do with a report detailing the ship’s new mission. Rather than leaving the details of said report to speculation, Dabbene spends four pages writing out the entire report amidst panels of characters talking with one another, and what is effectively a wall of text temporarily dilutes an otherwise perfectly paced book.

In a way, looking at Ark as merely a mysterious science fiction romp is missing the larger narrative. Representing a slue of mistreated and disenfranchised minorities, the otherworldly beings in Ark offer insight into our current cultural shortcomings. Dabbene best represents this with Commander Diaz, the ship’s second-in-command, who, in Ark’s opening panels, discusses how the meta-humans are just “passengers” (while the humans are the “crew”) and should not be given equal access to the ship despite the Captain’s orders. Diaz’s pigheaded stance is further cemented in his line, “Once they’re given full access, they won’t give it up easily.” Don’t worry, Dabbene offers up a great contrarian character in James, a crewmember that’s dating a meta-human in Iris and isn’t ashmed to admit it. Tinkering with expectation is something Dabbene does a lot of in Ark, though his most subtle work is the idea that James doesn’t want to hide his relationship despite the possible punishment from his superior officers. It not only gives us two characters to really root for, but it also offers a great message of hope.

Ryan Bayliss’s art is ever-changing, adapting to the roller coaster of Dabbene’s narrative. Toward the beginning and end of the novel, Bayliss offers a cheery outlook with relatively bright colors and simple character renderings with fun, expressive faces. Yet when the turn happens, the use of shadows becomes a staple for Bayliss, rendering the watching gaze of an eyewitness to the murder practically invisible and then displaying the heavy guilt in the culprit’s face. Backgrounds can be a bit lackluster since the entire book is withheld to a single spacecraft, but it’s the action that’s happening toward the front of the panel that is keeping readers like me at attention. You won’t fully expect the path Ark takes, but the strides that Dabbene makes with his science fiction narrative are in the hallowed footsteps of pinnacle works in the genre.

Ark is available to purchase either through Comixology for $4.99 or in print on Amazon for $19.95.