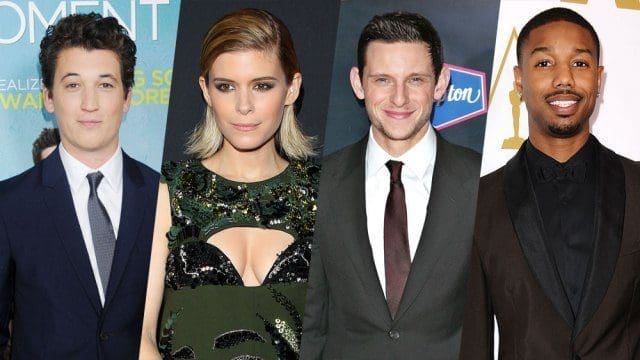 The cast of Fantastic Four, Miles Teller, Michael B. Jordan, Kate Mara and Jamie Bell,  will receive the “CinemaCon® Ensemble Award” it was announced by Mitch Neuhauser, Managing Director of CinemaCon. CinemaCon, the official convention of The National Association of Theatre Owners (NATO), will be held April 20 – 23, 2015, at Caesars Palace in Las Vegas. The cast of Fantastic Four will be presented with this special honor at the “CinemaCon Big Screen Achievement Awards” ceremony to take place on Thursday, April 23, in the evening at The Colosseum at Caesars Palace. The Coca-Cola Company, the official presenting sponsor of CinemaCon, will host the final night gala awards program.

“It’s not very often that we have the opportunity to award an entire cast for their stellar performances,” noted Neuhauser. “CinemaCon is privileged to have Miles Teller, Michael B. Jordan, Kate Mara and Jamie Bell joining us this year at the Big Screen Achievement Awards. This group of young actors is sure to continue stunning audiences when they hit the big screen for their upcoming film Fantastic Four.”

Fantastic Four will be released via 20th Century Fox on August 7, 2015. A contemporary re-imagining of Marvel’s original and longest-running superhero team, Fantastic Four, centers on four young outsiders who teleport to an alternate and dangerous universe, which alters their physical form in shocking ways. Their lives irrevocably upended, the team must learn to harness their daunting new abilities and work together to save Earth from a former friend turned enemy. The film is directed by Josh Trank from a screenplay by Jeremy Slater and Simon Kinberg & Josh Trank, based on the Marvel Comic Book by Stan Lee and Jack Kirby.  The producers are  Simon Kinberg, Matthew Vaughn, Hutch Parker, Robert Kulzer, and Gregory Goodman.

Miles Teller first broke onto the screen with his standout performance opposite Nicole Kidman in “Rabbit Hole.” Teller is also known for his roles in “The Spectacular Now,” “Whiplash,” “Divergent,” and “Insurgent.” He can also be seen in the upcoming films “Get A Job,” and “Bleed for This.”

Michael B. Jordan first drew the attention of moviegoing audiences with his breakout roles in “Red Tails,” and “Fruitvale Station.” On the small screen he has had reoccurring rolls on some of the most critically acclaimed shows on television including “The Wire,” “Friday Night Lights,” and “Parenthood.” In addition to “Fantastic Four,” Jordan can be seen later this year starring opposite Sylvester Stallone in “Creed.”

Kate Mara made her feature film debut at age 15 when she appeared in “Random Hearts.” Mara’s list of film credits include “Brokeback Mountain,” “We Are Marshall,” “Shooter,” “127 Hours,” “The Martian,” “Transcendence,” “Transsiberian” and most recently she completed filming on the thriller “Man Down.”

Jamie Bell rose to fame when he was still a teenager after staring Stephen Daldry’s “Billy Elliot.” Since then, Bell has appeared in films including “Nicholas Nickleby,” “Snowpiercer,” Filth,” “Man on a Ledge,” “The Adventures of Tintin: The Secret of the Unicorn,” “Flags of Our Fathers” and “Jumper,” to name a few. Currently, Bell stars on AMC’s “Turn.”

The movie hasn’t even been released yet. I feel like 20th Century Fox must have paid to “win” this award to drum up publicity.