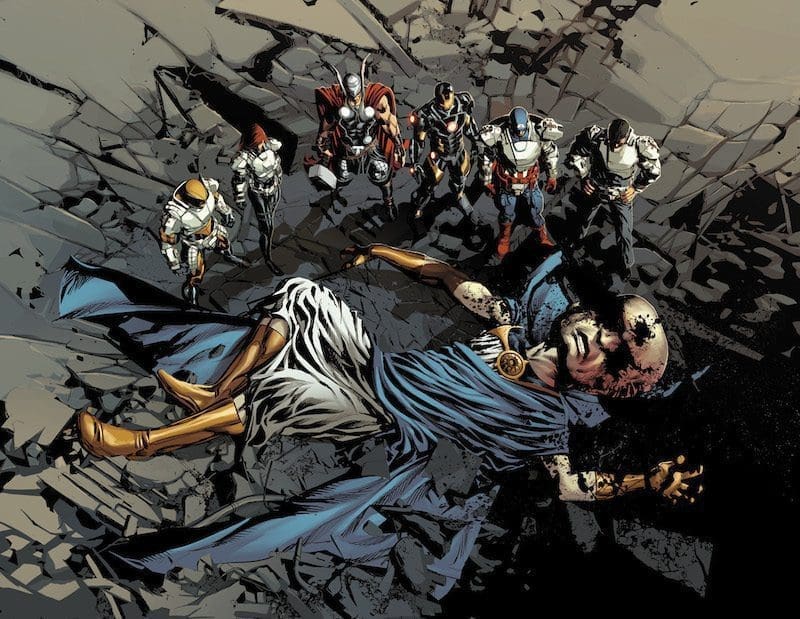 Welcome true believers to a brand-new format for weekly comic reviews! I have decided to replace the traditional long-form comic reviews with much shorter, capsulated reviews with the hope being that fewer words being written will result in not only more concise reviews but ultimately more comics covered on a weekly basis. If there is a particular series that is not being represented either here or on the Internet as a whole, I would strongly encourage you to take to the comments section below and voice that opinion.

Please note, all the comics that are reviewed below represent those books that I am actually purchasing. What this means is while I would love to review every book that comes out in a given week, comics are kind of expensive and I can only buy so many. Therefore, some weeks might only contain a few books while other weeks will contain more; it all depends on what I can purchase. It’s the reality of budget comic book buying.

I’ll be the first one to agree that having four different Batman-led books on the stands is superfluous, but it’s hard to argue with the both visual and narrative variety that is being produced in each one. In only two issues, Brian Buccellato and Francis Manapul have transformed Detective Comics into the most diverse of all the Batman books, leading with a captivating art style, an atypical color palette, and a plot that brings the Dark Knight closer to his “World’s Greatest Detective” roots. Batman spends a good amount of time within the pages of Detective Comics #31 investigating the death of Elena Aguila from the last issue, taking the case right out of the hands of the GCPD, particularly lead detective Harvey Bullock. Bullock’s connection to the Icarus case left me pleasantly surprised as Buccellato seems to be building him as a strong dramatic foil for Batman not unlike Commissioner Gordon but with less mutual respect. There is still a lot of shuffling of the nondescript villains going on, leaving the series without a threat beyond a street drug so far, but Manapul’s tremendous art carries even the less engaging panels and makes them eye-catching. It’s refreshing to see both Buccellato and Manapul co-credited as “storytellers” for their work on this series since their respective writing and artwork are so married together that the book would suffer if one were absent. Thankfully for us, that doesn’t appear to be happening anytime soon.

DC often faces criticism over their collective universe being “too dark” or “too depressing,” and Future’s End might be their direct response to that. If you think the current stories of the DCU are dark and depressing, wait until you get a load of what the future holds within the pages of Future’s End #1. Those readers that did not pick up DC’s Free Comic Book Day offering of Future’s End #0 are going to be on the outside looking in as this first issue begins a panel after the last one ended, so allow me to attempt to summarize the plot. Sometime in the future, something named Brother Eye is turning all the heroes into murderous cyborgs and Batman of the Batman Beyond variety travels back in time to stop Brother Eye’s creation…except he doesn’t travel far enough back and can’t time-jump ever again. Why? Because comics, that’s why! I suspect the plot won’t make much sense for a while since this is a weekly release but one thing is for certain:  Many familiar faces in the DCU are going to be killed horribly. Just in Future’s End #1 alone, an entire team of heroes is wiped out, so from the start, this is obviously not going to be the book for people looking for a good time. However, looking beyond the ensuing death and destruction, it is refreshing to have Terry McGuinness back in the universe as a sort of hybrid of the Batman Beyond TV show and the DC New 52 universe. His squabbling with his smarmy A.L.F.R.E.D. in-suit computer is the most light-hearted the book gets, but at the very least this is going to be a series featuring characters we don’t see often (or at all in Terry’s case) in the mainline DCU. While I can’t say this is the kind of material I’m going to want to read each week, it does deliver more of what the #0 issue offered, for those that dig that.

Call it either kismet or incredible foresight but somehow both versions of Spider-Man have returned to their respective universes a mere two weeks apart, with a high-profile movie sequel release set right between them. Much like Peter Parker’s return outing in the 616 Universe recently, Miles Morales: The Ultimate Spider-Man #1 is like reconnecting with an old friend who hasn’t changed a bit. Granted, Miles is a little colder to the adults in his life ever since his dad abandoned him (after learning that Miles is Spider-Man), but the same teenage protagonist doing his best to juggle a hectic personal and professional life remains the book’s strongest draw. Brian Michael Bendis has a lot of fun with the interactions between Miles and his best friend, Ganke as they discuss the attractiveness of a fellow heroine, but is easily able to slip into a semi-serious tone when the idea of Miles revealing his identity to his girlfriend, Katie Bishop, is brought into question. David Marquez is brought right back into the fold flawlessly as the artist and is, as always, on point with capturing all the emotional beats. Speaking of emotions, how about that final page? Whew.

Original Sin #1’s big draw is supposed to be the shocking and mysterious murder of the omnipresent Uatu the Watcher but for me, it’s the unlikely superhero teamups that makes this issue stand out. Writer Jason Aaron introduces an impressive 16 heroes into this inaugural issue and culls together teams from the traditional—like Captain America, Thor, and Iron Man—to the downright bizarre—like Doctor Strange and The Punisher (?!). Yet the greatest coalition that is assembled within the pages of Original Sin #1 has to be Winter Soldier, Moon Knight, and Gamora. It’s the kind of team that deserves a spin-off book that would likely get cancelled immediately because it doesn’t include Wolverine. Original recipe Nick Fury (the white, David Hasselhoff-looking one) makes his triumphant return and Aaron finds an interesting spot for him as someone who appears to be commanding several other teams to conduct his own private investigation behind The Avenger’s backs. Mike Deodato’s shadow-heavy art style, along with Frank Martin’s muted colors, handle the gravitas of what transpires within this one issue, including a gruesome image of The Watcher bleeding from the eye sockets because both of his eyes have been removed. And judging by the final image that closes out this issue, Original Sin is bound to get even grittier.

Maybe it’s a result of high expectations built up out of the three-month break since the last issue but Rat Queens #6 is not the triumphant return I was hoping for. That’s certainly no cause for alarm right now since even being the weakest installment of an otherwise near-perfect series is still better than average. Rather than putting its best foot forward to create a new adventure for our foul-mouth foursome of heroines, Rat Queens #6 clings to a lot of events of the prior arc. Hannah and Sawyer Silver’s on-again-off-again-back-on-again-back-off-again relationship is scrutinized throughout the issue even though it appears the only two characters that have a problem with their union are Hannah and Sawyer themselves. I’m drawn to Rat Queens month after month because of the comradery between the ladies not their quarrels over relationship statuses. Even though it’s more bickering than quipping, the Queens continue to spout the sharpest dialogue around thanks to writer Kurtis Wiebe and each page looks incredible under Roc Upchurch’s art, just as it has since the start. I am also greatly anticipating how the dynamic of the team adjusts to the new character introduced late in this issue. Dee definitely has some explaining to do.