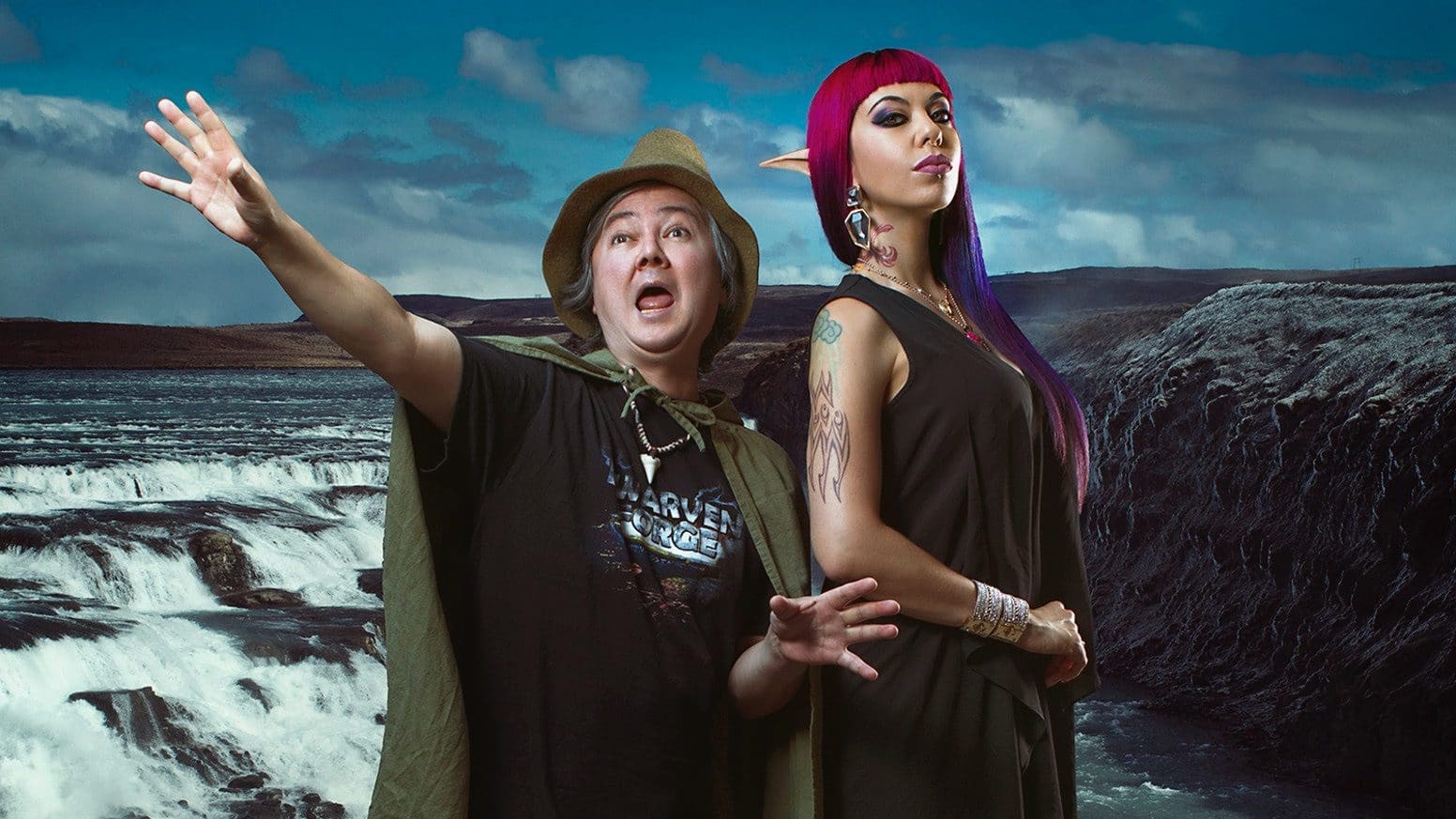 The show, created by award winning filmmaker Josh Bishop and produced by Ron Harbin, will take viewers on an amazing odyssey across the globe, as they seek out inspiration for their own personal worlds of art, fantasy and storytelling.

“This is so fantastic! Thank you everyone who believed in us and supported in all the ways! It just goes to show that we Storytellers value these ancient stories and cultures,” says co-host Satine Phoenix. “I grew up watching Joseph Campbell’s Myth and Symbol and David Attenborough’s Trials of Life series (I still have the VHS on my shelves) and other educational shows on PBS. I’m so honored to be a part of this project and especially to represent women and minorities in this intellectual and storytelling realm. We’re no longer breaking molds, we are paving a new way for the future! I’m excited Stefan and I can make these historical pieces accessible for everyone and hope it inspires you as it inspires us. I can’t wait to see what you create from what we share! Cheers to the many journeys and to our community!”

Fellow co-host and co-creator Stefan Pokorny shared his co-host’s excitement: “Thank you for believing in this wonderful project. When I was a boy I was transported by shows like In Search Of… or Wild Kingdom; shows that took my daydreaming to distant places and unlocked my imagination. Dungeons and Dragons had the same effect on me…as did art and actual travel. Our show combines ALL those elements and will undoubtedly make a truly mesmerizing, thoughtful and informative program. We need such quality programs in the world, especially at this point in humanity’s growth. We are at a crossroad where we are all becoming jaded and technologically entranced by gadgets and small devices. We must keep our eyes open to the wonders of nature and other cultures and never lose our humanity.”

DESTINATION FANTASTIC is an independent documentary travel show that will follow the hosts on a whimsical journey each episode as they explore all things fantastical. Castles, dungeons, labyrinths, mythological creatures, fantasy games, sacred grounds, art, literature, music and history are all par for the course. Along the way, celebrities, experts and fanatics will help showcase the history and details of each new location and subject.

Satine and Stefan will be looking for inspiration for their future projects, as well as learning about what has inspired myths, folklore, and storytelling since the beginning of civilization – much like the infamous game itself.

The pilot episode will feature the hosts exploring Iceland where they do everything from seeking out the Codex Regius (the earliest known written history of the Norse mythological canon), to exploring volcanoes and glaciers where they see the impact of the rapidly changing global climate on modern-day Iceland first hand. Satine and Stefan will uncover the root of legends and storytelling and impart their discoveries into the imaginations of their viewers. Future episodes will encompass a number of enchanted locales specifically chosen by the hosts.

The Producers (Josh Bishop, Ron Harbin and Lorraine Best) of Destination Fantastic are: “thrilled to announce the success of the Kickstarter campaign and would like to extend a heartfelt thanks to each and every one of the backers, in addition to everyone on the team who helped make this possible.” They continued, “we are humbled by your support and would not be here, today, without each and every one of you. To Stefan and Satine, thank you so much for taking us all on this adventure with you. We can’t wait to see what the future holds!”

Director and co-creator Josh Bishop further added: “I want to extend a heartfelt thank you to each and every one of you amazing people who backed this project. From day one I knew we were on to something and I can’t wait to share all of it with you. Hold onto your hats guys, it’s gonna be fantastic!”

And finally, Executive Producer Ron Harbin echoed the excitement: “This rollercoaster has been an epic adventure, already.  I can only imagine what is waiting for us at DESTINATION FANTASTIC!  Thank you, so much, to everyone who has supported our show. Our production team couldn’t have been better and all of the backers on Kickstarter have truly shown what the community is capable of. Cheers, everyone! Job well done!”

More information on DESTINATION FANTASTIC can be found at destinationfantastic.com.

About Destination Fantastic
DESTINATION FANTASTIC is an independent documentary travel show that will follow the hosts  on a whimsical journey each episode as they explore all things fantastical. Castles, dungeons, labyrinths, mythological creatures, fantasy games, sacred grounds, art, literature, music and history. Along the way, celebrities, experts and fanatics who will help showcase the history and details of each new location and subject. Satine and Stefan will be looking for inspiration for their future projects, as well as learning about what has inspired myths, folklore, and storytelling since the beginning of civilization – much like the infamous game itself.

About Stefan Pokorny: Founder and owner of Dwarven Forge, the industry leader in gaming terrain.

Part artist, part philosopher, part jester, Stefan Pokorny preaches the virtues of fantasy gaming to all who will listen. Combining art, Dungeons and Dragons, and commerce, he formed his company Dwarven Forge in 1996, which has since become the gaming industry leader in the creation of miniature terrain and other fantasy sculptures. He has raised millions of dollars on Kickstarter for Dwarven Forge with the help of his legions of fans and is the subject of the documentary The Dwarvenaut, which premiered at SXSW in 2016. As an artist, he believes in travelling the world to see and experience all it has to offer in person.

About Satine Phoenix:  Gaming celebrity and former ambassador for D&D. About to go on a promotional tour of Europe for D&D.

A consummate storyteller and lifelong creative, Satine Phoenix has always had a passion for building worlds and growing communities. She began filming Dungeons and Dragons games in 2009 which led to the inception of Celebrity Charity D20 with Keith Baker, a livestreamed gaming event benefiting Reach Out and Read. From there, she has worked on hundreds of Dungeons and Dragons events and is often called the ‘Queen of D&D’. Her impact on the tabletop community has been acknowledged in such publications as Forbes, Time Magazine, io9, and Maxim. Wherever the story leads her, Satine has proven time and again that the language of play is a universal one, bringing people together through the power of imagination.

About Josh Bishop: Award Winning Filmmaker
After years of creating short form fiction and other content, Josh Bishop’s first documentary feature Made In Japan, premiered at SXSW 2015 in Austin, Texas. It took the 2015 festival circuit by storm and won quite a few awards including Best Documentary at the Global Visons Film Festival and the Discovery Award for Best First Feature at the Calgary International Film Festival. Josh’s sophomore documentary feature, The Dwarvenaut, premiered at SXSW 2016 and is available on most streaming platforms. Real stories and real human emotions are the heart of Josh’s work.

About Ron Harbin: Award Winning TV Producer
In 2000, Ron Harbin, a former Nashville music industry insider, found himself in the television production business. After a move to Santa Monica, he began traveling to exotic places with network specials and a variety of television series. Leading productions around the world for some of today’s biggest shows has made him a highly sought-after producer.  Today, Ron’s work is featured on Discovery, History, A&E, PBS, HGTV, CMT, along with many digital platforms.

‘GAME OF THRONES: THE LAST WATCH’ Documentary Debuts May 26th

GAME OF THRONES becomes first TV series to be showcased in...

HIS DARK MATERIALS Debuts This Fall, Exclusively On HBO