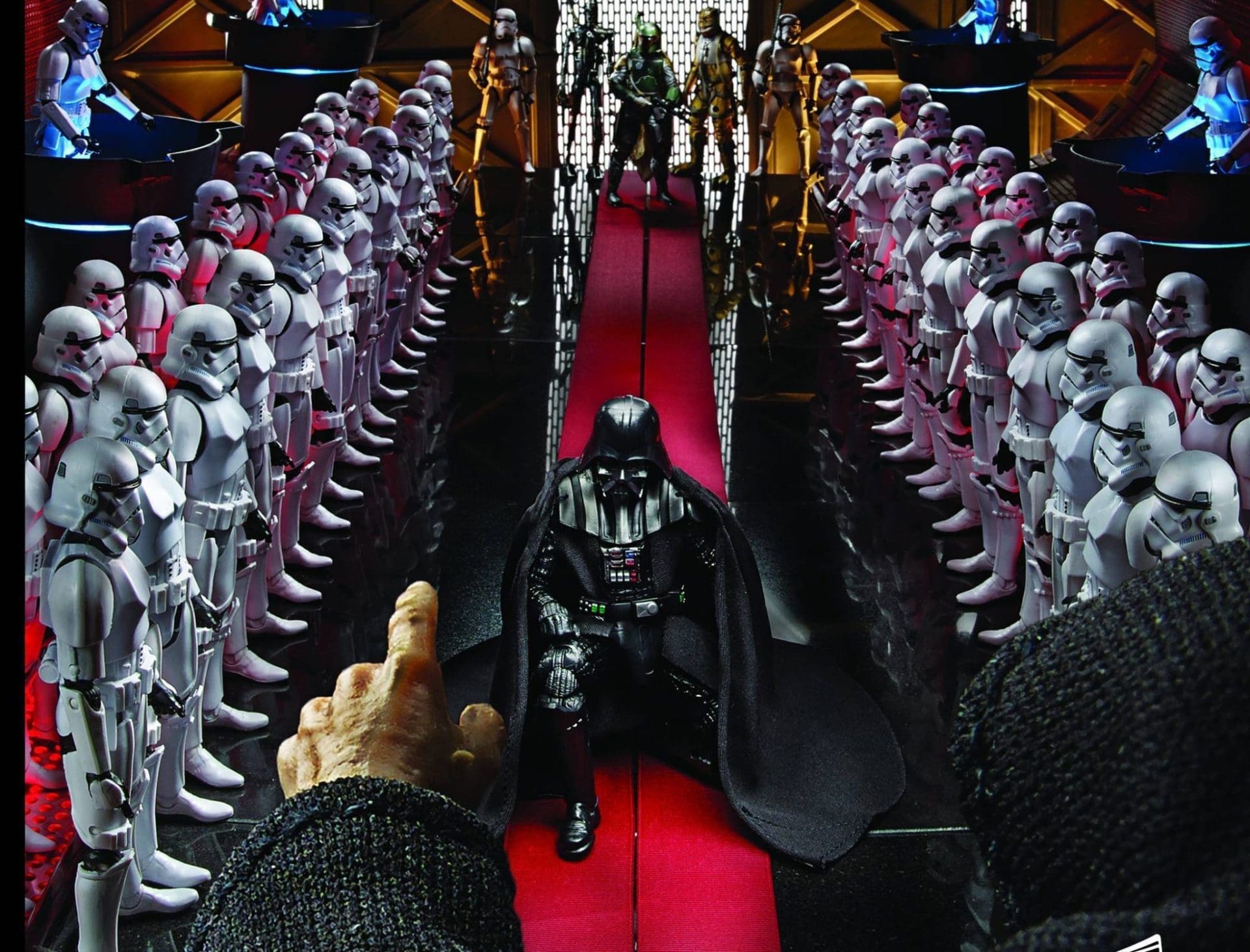 To celebrate the return of Star Wars comic books to Marvel Comics, Hasbro Toys and Diamond Comic Distributors have created a unique Star Wars #1 PREVIEWS Exclusive Toy Fair Edition, a special variant that will be limited to 10,000 copies. The impressive tableau was staged on a physical, scaled throne room set with actual lighting, and with no computer-generated enhancements under the direction of Hasbro’s Star Wars product team. (In other words, there really are nearly 50 individual Stormtrooper Black figures on this cover!) This should make the variant a must-have for any action figure fan who wants to mark the start of a new era for Star Wars comics.

Star Wars, comic book and toy fans can pre-order their own copy of the Star Wars #1 PREVIEWS Exclusive Variant from their local comic book specialty shop now to ensure their copy when it releases January 13, 2015. The final cut-off date to pre-order is December 15th, making it critical for fans who want the limited edition to get it before time runs out.

“We wanted to commemorate this event in a very special way,” said Executive Director of Sales, Mike Schimmel. “We had a great concept for the cover, and when we brought it to Hasbro’s Star Wars team, they enthusiastically jumped at the chance to recreate the cover with real action figures.

“We thank Hasbro for working with us to create this amazing variant cover, which is Diamond’s first-ever Toy Fair-exclusive comic, and one that we’re sure will be treasured by every Star Wars fan who is fortunate enough to obtain this limited edition.”
Additionally, Diamond and prospective retailers may obtain a free copy of the variant by contacting Diamond to make an appointment with their Sales Representative at Toy Fair 2015 (February 14-17) or Spielwarenmesse 2015, the International Toy Fair in Nürnburg, Germany (January 28-February 2). Appointments for Toy Fair 2015 must be made by January 30th and appointments for Spielwarenmesse must be made by January 15th. To schedule an appointment please call Diamond Comic Distributor’s Sales Department at 443-318-8001 or email zben@diamondcomics.com.

ABOUT HASBRO INC.– Hasbro, Inc. (NASDAQ: HAS) is a branded play company dedicated to fulfilling the fundamental need for play for children and families through the creative expression of the Company’s world class brand portfolio, including TRANSFORMERS, MONOPOLY, PLAY-DOH, MY LITTLE PONY, MAGIC: THE GATHERING, NERF and LITTLEST PET SHOP. From toys and games, to television programming, motion pictures, digital gaming and a comprehensive licensing program, Hasbro strives to delight its global customers with innovative play and entertainment experiences, in a variety of forms and formats, anytime and anywhere. The Company’s Hasbro Studios is responsible for entertainment brand-driven storytelling around Hasbro brands across television, film, commercial productions and short-form. Through the Company’s deep commitment to corporate social responsibility, including philanthropy, Hasbro is helping to build a safe and sustainable world for future generations and to positively impact the lives of millions of children and families every year. It has been recognized for its efforts by being named one of the “World’s Most Ethical Companies” and is ranked as one of Corporate Responsibility Magazine’s “100 Best Corporate Citizens.” Learn more at www.hasbro.com.

ABOUT DIAMOND COMIC DISTRIBUTORS (DCD)—Diamond is at the nexus of comics and pop culture. Based in Baltimore, MD, DCD is the world’s largest distributor of English-language comic books, graphic novels, and related pop-culture merchandise, serving thousands of retailers worldwide. For more information, visit Diamond on the web at www.diamondcomics.com.

PAIZO AND DYNAMITE PARTNER TO BRING YOUR PATHFINDER HERO TO LIFE...