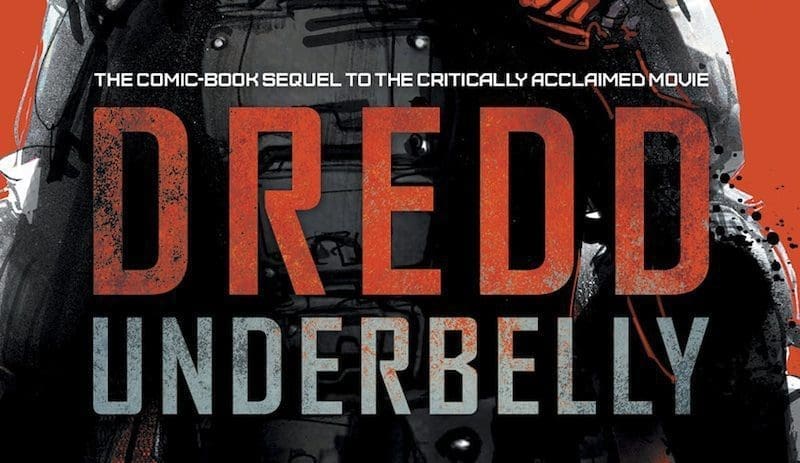 Dredd: Underbelly is about the closest semblance of a sequel to the 2012 film Dredd you could ask for, though it’s also currently the only option on the market. It has its problems, chief among them being that it’s attempting to fill the void of an unmade feature film with a comic book one-shot and therefore doesn’t have the room to expand on its flourish of ideas. As a result, Dredd: Underbelly feels less like the “comic-book sequel to the critically acclaimed movie” advertised on its cover and more like a “comic-book sequel pitch to the critically acclaimed movie.” It’s nevertheless a fun posit of what a Dredd sequel could potentially be just don’t expect it to completely satiate that craving for the real thing.

There’s both a fresh and familiar take on the Dredd universe in writer Arthur Wyatt’s story, which sees Judges Dredd and Anderson working several random cases that all tie together in the seedy underbelly of Mega-City One. Mutants factor prominently into the investigations—after both a trafficking shutdown and the discovery of mass graves—and had they remained the primary focus, Dredd: Underbelly might have felt like the next logical step in this universe. However, the introduction of a new drug named Psych—basically a stand-in for the Slo-Mo drug in Dredd—and a spiky haired female antagonist who looks and acts an awful lot like Ma-Ma keeps the plot feeling too stuck in the past rather than moving ahead toward the broader horizons that the mutant-angle lends to the narrative. To his credit, Wyatt has a lot of ideas as the focal center of this one-shot; it’s a shame that this isn’t a miniseries or ongoing series to allow him to expound on the various plot threads adequately enough.

It is difficult to determine (or judge, if you will) the merits of Henry Flint’s art in Dredd: Underbelly as beholden to the movie version of certain characters that were comic book creations to begin with. Flint’s version of the bulky, badass Judge Dredd looks much more like his comic book counterpart than the Karl Urban version, but that’s no surprise given Flint has been a regular artist for the character since the late 90s. Anderson, meanwhile, fairs well for the most part, though her facial features get significantly rougher as the issue moves along. Action is handled the best by far, with one two-page spread of the Judges infiltrating a Psych manufacturing plant looking like it could be a wicked sequence in the would-be sequel film. I can picture the slow motion now.

I’ll be honest:  I carry an unhealthy love for Dredd and to see a comic that attempts to write a sequel that Hollywood won’t is difficult to drag through the mud. Dredd: Underbelly isn’t perfect, but if it tides over fans until a movie announcement is made (or at least a comic book miniseries) then it’s a harmless purchase. Most shops sold out of this one-shot before it even went on sale, so be sure to put an order in for the reprint. More information can be found at 2000 AD’s website, rookie.