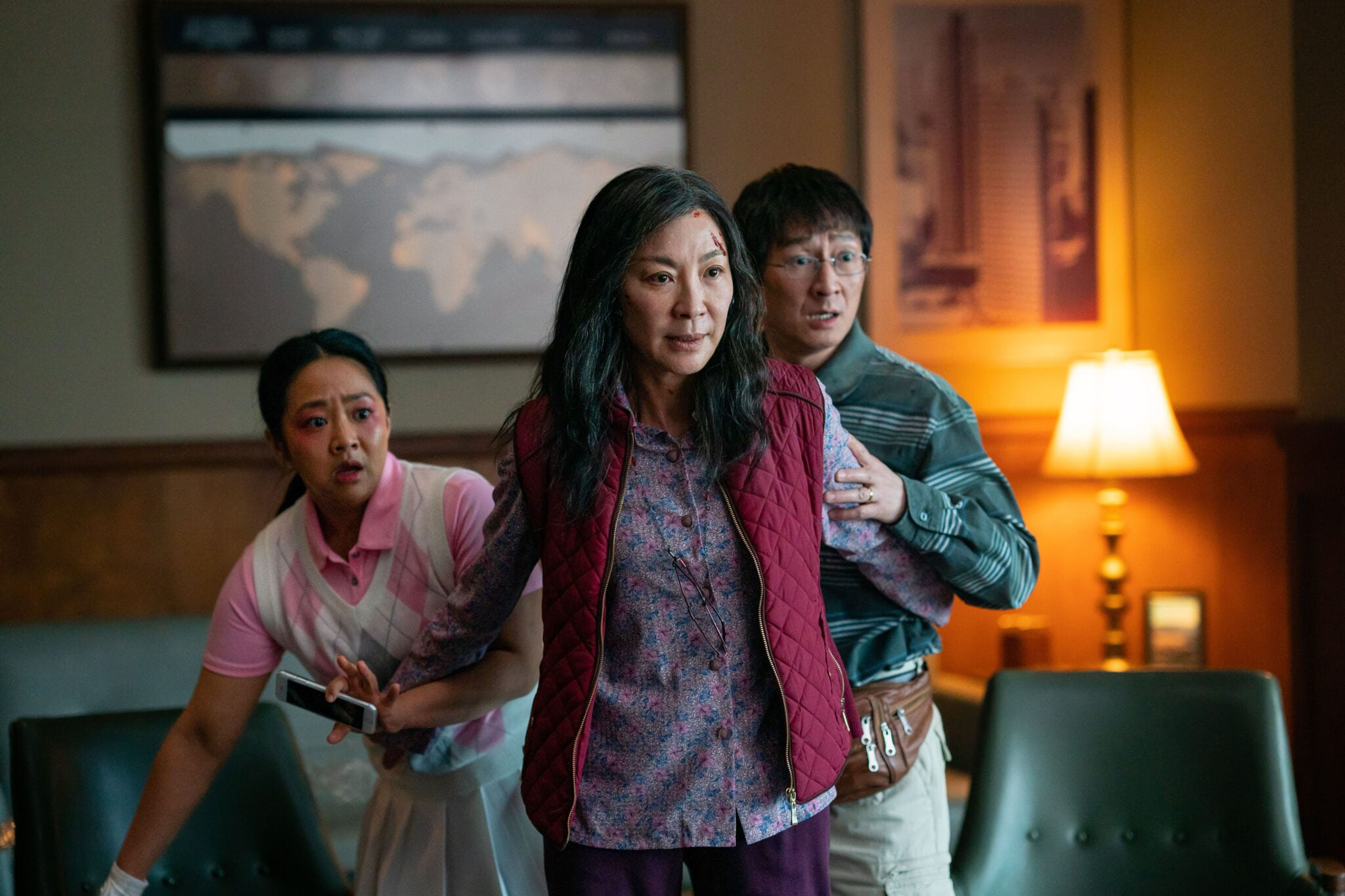 Everything Everywhere All At Once is the movie event of the year and that’s understating it. Written and directed by Daniels (Dan Kwan and Daniel Scheinart), this science fiction black comedy action drama — yes, you read that right…it does check off pretty much every genre of film — is an unapologetic assault on the senses so insanely imaginative your nerd heart will feel giddy leaving the theater.

Starring Michelle Yeoh, Ke Huy Quan, Stéphanie Hsu, James Hong, and Jamie Lee Curtis, the film follows Evelyn Wang (Yeoh), a Chinese-American woman, who discovers that she must connect with alternate versions of herself from parallel universes in order to help prevent the destruction of the multiverse.

In the film, Evelyn runs a struggling laundromat with her husband, Waymond (Quan) who is also being audited by the IRS after she incorrectly filed her taxes. Additionally, Waymond is also trying to give divorce papers to Evelyn; Evelyn’s father, Gong Gong (Hong), with an outdated world-view mentality, has just arrived from China; and Evelyn’s daughter, Joy (Hsu), has been struggling to get her mother to acknowledge her girlfriend, Becky (Tallie Medel). Tensions are understandably high in the household and that’s only the first 15 minutes of the film.

While at the IRS building, Waymond’s body is briefly taken over by an alternate universe version of himself called Alpha Waymond. Alpha Waymond explains to Evelyn the existence of many parallel universes and that every choice made creates a branching new universe. Led by Alpha Evelyn, the people of Alpha Universe were the first to connect with other universes by developing “verse-jumping” technology that allows people to access the skills, memories, and bodies of their parallel universe counterparts.

However, the multiverse is being threatened by Jobu Tupaki, a being that is able to experience all universes at once and can verse-jump at will who has also created a black hole that can potentially destroy the multiverse. Alpha Waymond believes that Evelyn, as the greatest failure of all Evelyns of the multiverse, has the untapped potential to defeat Jobu Tupaki once and for all.

What follows is a tour de force in filmmaking, a whirlpool of ideas and feelings about family trauma and acceptance, with dazzling action set pieces, and cinematic callbacks to iconic films of the past. Fans of The Matrix, Pixar, 70s kung fu classics, and even the legendary Wong Kar Wai will no doubt be pleased.

Michelle Yeoh is the anchor of this film and delivers a performance that showcases her multitude of talents that made her an icon in the 90s. From her timeless martial art skills to her impeccable comedic timing, we almost forget she has the ability to also flex acting muscles that will break down even the hardest of hearts. Anything less than a nomination during awards season would be a crying shame.

While the film has little to no faults, the trippy plot points and frenetic pace can confuse the casual viewer. Also, a warning to those sensitive to flashing lights as this film does not hold back.

Everything Everywhere All At Once is a cinematic journey that can’t be missed. While one could easily get lost in the rabbit hole with so many plot points swirling about, Daniels crafts a seamless amalgamation of intense action sequences, touching familial drama, and yearning for a long-lost love that will have moviegoers leaving with a feeling of limitless possibility yet existential dread all the same. It’s everything everywhere all at once and your senses will undoubtedly feel invigorated.

About EVERYTHING EVERYWHERE ALL AT ONCE

Synopsis: An aging Chinese immigrant is swept up in an insane adventure, where she alone can save the world by exploring other universes connecting with the lives she could have led.