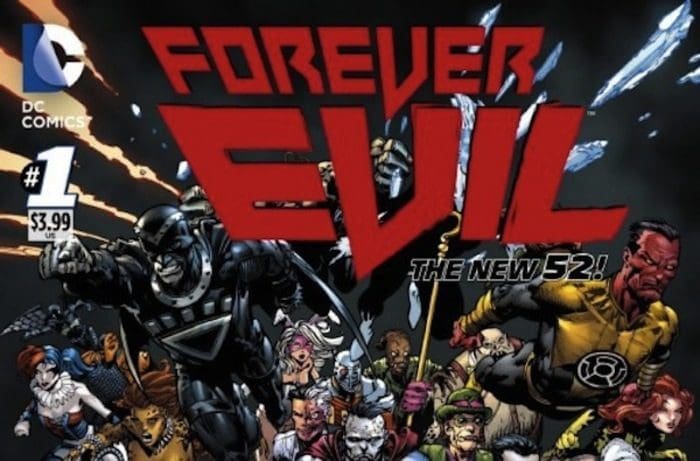 DISCLAIMER: There’s absolutely no way to talk about the events of Forever Evil #1 without spoiling the event that preceded it: Trinity War. If you haven’t finished this event or are waiting for it in trade, there will be spoilers for the end of that event within this review. You’ve been warned…

If you’re a regular DC comics reader, by now you’ve seen the zillions of solicitations for Forever Evil, the new seven-issue event from writer Geoff Johns and artist David Finch, and how it’s promising big changes in the DC New 52 universe. While the promise of a massive upheaval is nothing new in the world of major comic events, Forever Evil #1 does at least feel very big in its scope of concept. Johns conveys a true sense of disruption and uneasiness at the end of each page and by the end of it all, we’re not wondering what will happen next, we’re wondering what even could happen next.

At the end of the recently concluded Trinity War crossover event, the Crime Syndicate of Earth-3 invaded our world and killed the Justice League. It’s not entirely clear in this issue whether it’s all three of the Justice League teams or just the mainline one, but Superman’s cape, Wonder Woman’s lasso, and Aquaman’s trident are tossed out as proof of the Justice League’s demise. In their plot to take over the world, the Crime Syndicate has freed all of the villains from across the globe and brought them to the remains of the Justice League’s Watchtower to initiate them into their Secret Society. Naturally, the villains are skeptical of their new leaders for about a half-second, and then they all decide to join in on the festivities. All, that is, except for Lex Luthor.

Much of the narration of Forever Evil #1 comes from the viewpoint of Luthor, a character that is immediately vilified in the opening lines of the issue when he admits to once saving his sister’s cat from a tree by throwing it into the river. Yes, he’s that evil. Yet, as the events of Forever Evil #1 unfold, Luthor finds himself on the precipice of a new world order, and the genius of what Johns accomplishes by the end of the issue is the moment where Luthor reconsiders what he did to the cat. Maybe he should have jumped in after it. Maybe he should save the world.

There are a lot of promises surrounding the implications of Forever Evil and if this inaugural issue is any indication, the grandeur is definitely there. Change is in the air; the Crime Syndicate’s targeting of Nightwing in this issue raises some concern as to the future of that character in particular. Briefly shown as well are the Teen Titans and Batgirl, the latter of which most definitely could be a major factor in this mini-series if Nightwing is involved further. Forever Evil #1 is a big, bold step in making this event matter in the grand scale of the DCU.