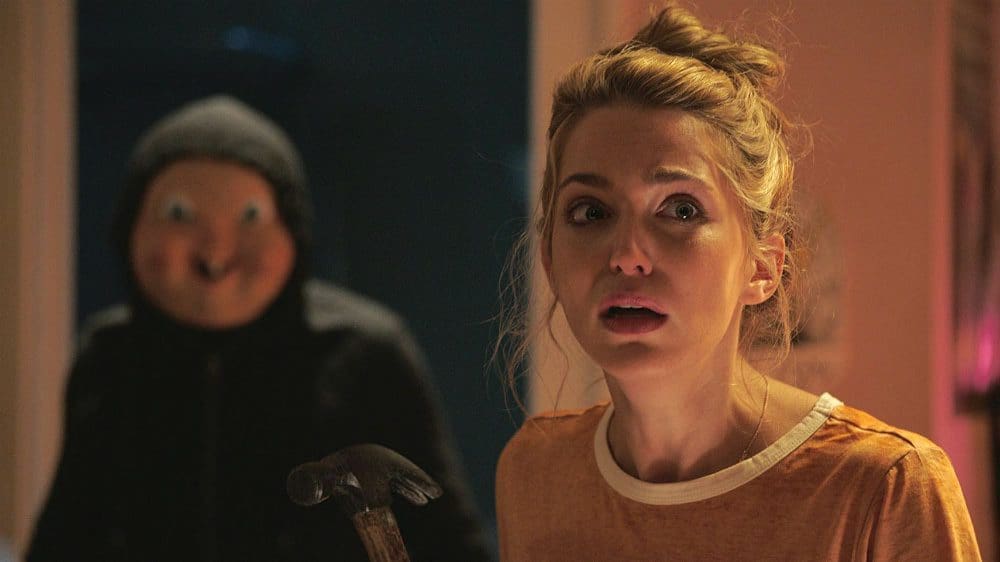 Time travel is my favorite plot device in film and television. Sure it can be used as a cop out to rectify the killing of characters and ignore story details that are suddenly no longer important. Other risks might include turning a story into a convoluted and confusing mess with no sense of direction; or using time travel as a gimmick that completely disregards character development. But if done well, the use of time travel can also be clever and creative and provide endless ideas for a character to go. The key, as always, is compelling us to go along with the adventure no matter how bizarre things get.

In Happy Death Day 2U, written and directed by Christopher Landon, Tree Gelbman (Jessica Rothe) is enjoying her freedom from the time loop that fate had trapped her in the day before, until she finds out that the events that transpired, including her many deaths, were not the result of cosmic forces but a scientific experiment gone wrong. An invention created by Bayfield University student Ryan (Phi Vu), best friend of Tree’s boyfriend Carter (Israel Broussard), was somehow responsible for infecting Tree with permanent déjà vu.

With the assistance of his classmates Samar and Dre, Ryan attempts to figure out how this time loop mishap occurred, but in doing so they, once again, trap Tree back into the previous day. Except this time she is no longer living out the same events. She is in a variation of her world somewhere else in the multiverse. Tree will need to rely on her alternate friends to get back home, while also saving lives from a new serial killer wearing a babyface mask. Unless this new reality becomes too attractive for her to resist.

I was worried that placing Tree in the same exact day as the original movie would make this sequel boring and uninspiring. Instead Christopher Landon takes things in a new direction, putting Tree in another dimension. One that is eerily similar, but with a few changes here and there. It’s those changes that make this adventure exciting and hilarious; and also require you to watch the first movie so you can appreciate them properly. One significant change in this world impacts Tree so much that she is unsure that she wants to return to her own dimension, which creates the emotional center of the story.

If you recall the tone of the first movie, the Happy Death Day franchise is very much a horror comedy. The overall tone is at times tongue-in-cheek and uses all manner of sight gags, both gory and silly, to get a laugh. It also has its share of scary moments. The serial killer element and time loop premise provide suspense and give actress Jessica Rothe plenty of moments to shine, both dramatically and comedically. Danielle Bouseman, who plays Tree’s sorority sister, even has a fun scene that reminds me of something out of Animal House.

This sequel definitely ramps up the insanity. The deaths are more ridiculous and the interactions with the characters are even more outlandish. I found it amusing at times because of the premise and I know that’s what the original movie was going for; but I can see how the zaniness would be offputting after a while. It may prevent you from connecting with the heartfelt moments sprinkled throughout the film. One thing I will put in the plus column is they did not play it safe.

The music in this film is brilliantly composed by Bear McCreary. He makes scenes funnier or scarier and you can tell when he pays homage to previous works, such as Alan Silvestri’s Back to the Future score or Harry Manfredini’s Friday the 13th score. The nods are subtle and they give a little more personality to those scenes.

Happy Death Day 2U is a worthwhile sequel that doesn’t take itself too seriously. Sometimes it isn’t serious at all, but it never loses focus. Perhaps answering the mysteries of the first movie wasn’t the way to go, but now we have so many more directions to explore. I always felt the editing and composition of the scenes in these films is a character in itself.

Jessica Rothe brings a lot of energy and heart to her performance. I don’t believe any other characters interested me as strongly as her’s did, but then again it is primarily her story. The entire cast did an excellent job complimenting that journey and providing some nice comedic relief. I recommend this for time travel fans, horror fans, and couples looking for a more unorthodox date movie this Valentine’s weekend. Also there is a mid-credits scene so stay in your seat for a minute or two. It only gets weirder from here.

About Happy Death Day 2U

Synopsis:  Tree Gelbman is stuck once again reliving the same day, but unforeseen events present a new challenge that she must overcome before she can escape this time loop.