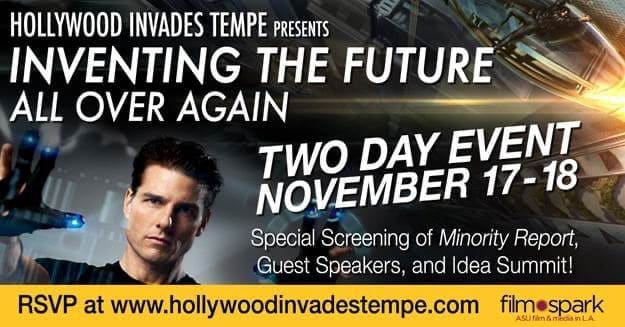 DETAILS:     Join ASU’s Hollywood Invades Tempe for a lecture on Narrative Matters – How Stories Reflect, Distort, and Create Our World with Minority Report producer Walter Parkes on November 17 at Old Main. Later that evening, catch a special screening of the film at Harkins Valley Art Theater followed by a Q&A with the minds behind the magic. Finally, on Friday, November 18, come collaborate with the futurists behind the world of Minority Report, ASU leading edge professors, and fellow students for a two-part, day-long “idea summit” and look 50 years into the future!

Come out for this completely free event and dive into the minds of the genius creators behind the futuristic sci-fi, Minority Report.

WHAT:          A two-day FREE event showcasing the filmmakers and producers of Minority Report featuring fun interactive events that peer 50 years into the future!

Walter Parkes
Mr. Parkes is a producer, screenwriter and former studio executive whose films include the Men In Black series, Gladiator, Flight, Minority Report, Catch Me If You Can, The Ring, Awakenings, The Mask of Zorro, Twister and Amistad, as well as the screen adaptations of The Kite Runner and of Steven Sondheim’s Sweeney Todd, and many others. He and his wife, Laurie MacDonald, ran the motion pictures division of Dreamworks Studios from its inception in 1997 until 2006. During Mr. Parkes’s and Ms. MacDonald’s tenure, the fledgling studio won, for only the second time in Academy history, three consecutive Best Picture Oscars: American Beauty, Gladiator, and A Beautiful Mind, the latter two in partnership with Universal Studios.

Alex McDowell
McDowell was a production designer with 30 years experience in feature films, working with directors David Fincher, Steven Spielberg, Terry Gilliam and Anthony Minghelia amongst others. He was the production designer for Fear and Loathing in Las Vegas, Man of Steel, The Watchmen, Charlie and the Chocolate Factory, Fight Club and Minority Report. His production design work on Minority Report is considered seminal both for its vision of near future technology and its integration with people’s behavior, and is believed to have resulted in nearly 100 patents for new technologies. He is now a Professor of Practice in Media Arts + Practice at USC School of Cinematic Arts, where he teaches world building.

Peter Schwartz
Peter Schwartz is Senior Vice President for Global Government Relations and Strategic Planning for Salesforce.com. In these roles he directs policy and politics throughout the world and manages the organization’s ongoing strategic conversation. He publishes and lectures widely and served as a script consultant on the films “The Minority Report,” “Deep Impact,” “Sneakers,” and “War Games.”

Neil Gershenfeld
Prof. Neil Gershenfeld is the Director of MIT’s Center for Bits and Atoms. His unique laboratory is breaking down boundaries between the digital and physical worlds, from creating molecular quantum computers to virtuosic musical instruments. Technology from his lab has been seen and used in settings including New York’s Museum of Modern Art and rural Indian villages, the White House and the World Economic Forum, inner-city community centers and automobile safety systems, Las Vegas shows and Sami herds.

Shaun Jones
Dr. Shaun B. Jones is a consultant on advanced medical science, technologies, and national security threats and a former project manager with the Biodesign Institute at Arizona State University, an interdisciplinary research center that addresses tough biological and health-related problems and solutions in the areas of diagnostics and treatments, infectious diseases, planetary and human health, and national security. Prior to that, Shaun was with the National Reconnaissance Office of the U.S. Department of Defense

Steve Barnett
Dr. Steve Barnett is President of Bardo Consulting where he designs and directs consumer research and strategy projects that use both ethnographic methods and real-time software data analysis. Dr. Barnett enjoys an international reputation for his expertise in consumer and market strategy, branding and business strategy development.

Jay Ogilvy
Jay is a faculty member of the Presidio School of Management, and has taught at Yale University, Williams College, and the Haas School of Business at UC Berkeley. Currently, he is a consultant for corporations and organizations on strategic and sustainable growth. He co-founded the Global Business Network, a research and consulting company serving over 100 of the Fortune 500 with strategic planning based on alternative scenarios and intelligence.

Chris Ertel
Chris Ertel is co-head of Global Business Network’s (GBN) consulting practice. Since joining GBN in 1997, Chris has led or worked on about 50 long-term strategy projects related to education, regional development, and the consumer goods and financial services industries, among others.

Joel Garreau
Professor Garreau is the author of Radical Evolution: The Promise and Peril of Enhancing Our Minds, Our Bodies, and What It Means to Be Human, a look at the hinge in history at which we have arrived. The genetic, robotic, information and nanotechnology revolutions are changing what it means to be human – modifying people’s minds, memories, metabolisms, personalities and progeny – not in some distant science fiction future but right now, on our watch. As director of The Prevail Project, he builds upon a Radical Evolution concept that the Prevail Scenario – the humanistic possibility that we can control and direct this future – might be encouraged. The idea is that if the Defense Advanced Research Projects Agency (DARPA) can accelerate the technological future into being, perhaps the same can be done for the responses of our societies.

Lindy Elkins-Tanton
Lindy Elkins-Tanton is the director of the School of Earth and Space Exploration at Arizona State University.  She is a two-time National Academy of Sciences Kavli Frontiers of Science Fellow and served on the National Academy of Sciences Decadal Survey Mars panel. In 2008 she was awarded a five-year National Science Foundation CAREER award, and in 2009 was named Outstanding MIT Faculty Undergraduate Research Mentor.

Prasad Boradkar
Prasad Boradkar is Associate Professor and Coordinator of Industrial Design at Arizona State University in Tempe. He is the Director of InnovationSpace, a transdisciplinary laboratory at Arizona State University where students and faculty partner with corporations to explore human-centered product concepts that improve society and the environment. His research activities focus on using cultural theory to understand the social significance of the designed environment. His publications include several articles and a book titled Designing Things: A Critical Introduction to the Culture of Objects.

Michael Bennett
Michael G. Bennett is an associate research professor in Arizona State University’s School for the Future of Innovation in Society, the Center for Science and the Imagination, and the Risk Innovation Lab, as well as a Lecturer in the Sandra Day O’Connor College of Law. He was formerly an associate professor on the faculty of the Northeastern University School of Law and the Andrew W. Mellon Fellow in Science, Technology and Society at Vassar College. He has also held teaching and research positions at the University of Michigan, Michigan Technological University, Polytechnic University, and the University of Virginia, and has served as advisor to several university offices of technology transfer.

Alan Gershenfeld
Alan is founder and President of E-Line Media, a publisher of digital entertainment that engages, educates and empowers. Prior to E-Line, Alan was CEO of netomat, a leader in mobile-web community solutions. netomat originated as network-based art project and was selected as a Technology Pioneer at the 2007 World Economic Forum at Davos. Before netomat, Alan was member of the executive team that rebuilt game publisher Activision from bankruptcy into an industry leader. Alan is also a Founding Industry Fellow for ASU’s Center for Games & Impact.

First round of guest announcements for Phoenix Comicon 2015!