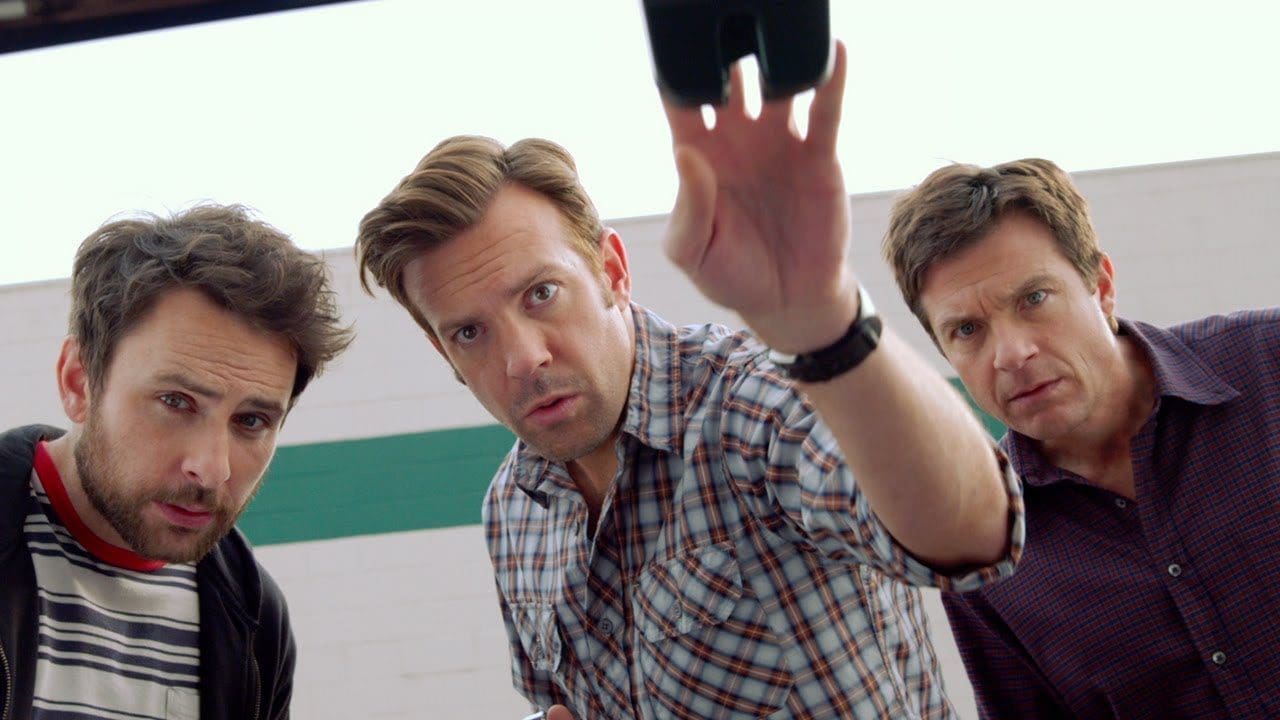 Take a premise similar to the movie Strangers on a Train by Alfred Hitchcock.  Whereby two strangers agree to kill the other’s target and get away with it.  Surround that premise around three friends with employer issues and you have what turns out to be a winning formula.  Not that the premise needed to be that intricate.  The first Horrible Bosses was well-paced with kinetic dialogue and sharp timing by Jason Bateman, Jason Sudeikis, and Charlie Day. Let’s not forget to mention the brilliant contribution of their A-list costars.  The writing and humor is what really made that comedy stand out.  It was as if Charlie Day took a script from It’s Always Sunny in Philadelphia and got two other actors to fill in for the episode.  The sequel takes the trio on another strange, but somehow rational act of crime, at least at first.  There is nothing more hilarious than watching a plan come together so terribly.

In Horrible Bosses 2, directed by Sean Anders, Nick (Bateman), Kurt (Sudeikis), & Dale (Day), are trying to get their startup company off the ground by finding investors.  After a spot on the local news, they are contacted by Rex Hanson (Chris Pine), who wants to buy the company.  Rex’s father Bert (Christoph Waltz) convinces a bank to write them a loan and offers to purchase a sizable amount of their invention and sell the product exclusively.  Once the company gets going and the product gets made, Bert cancels his order and reveals to the guys his plan to buy their business once it goes into foreclosure by the bank.  Which leads to their plan to kidnap his son Rex and ransom him to recoup their losses.  Brainstorming ideas is not their strongest suit so they end relying on some familiar friends such as Dean Jones (Jamie Foxx), who goes by a much catchier and profane nickname, and Dave Harken (Kevin Spacey), who seems perfectly comfortable behind bars.  Once the plotting and scheming begins, the outlandish escapades create themselves.  This group of actors have chemistry in spades and almost require no direction from a script.  Just add water.

There is a desire to go more over the top in sequels and this one is no exception.  Fortunately it works in this movie with the help of the nonstop supply of jokes and one-liners.  Each scene is packed with so much dialogue, if you laugh you will miss at least three lines.  I can’t say if the writing would have been any better with other actors because these three perform so well together it sharpens the movie and gives you a ride that lasts well into the credits.  They probably didn’t even need help accomplishing this, but all the supporting characters elevated this comedy as well.  Jennifer Aniston (Julia) returns as the nymphomaniac dentist now using a sex addict group to find new meat.  Her scenes with Jason Bateman are raunchy and fabulous.  Jamie Foxx (Jones) and his helpful advice provides some validity to this flawed ransom plan.  Dave Harken (Spacey) hasn’t slowed down in prison or lost his ability to tear into Nick and his friends.

Another addition to this sequel is Jonathan Banks as Detective Hatcher, the man assigned to find and capture the unknown kidnappers.  Much like Bateman’s character, Hatcher is one of the straight men in this movie trying to make sense of this lunacy and put a stop to it.  I would have enjoyed more scenes with him, but his moments were short-lived and only helped to get our main characters where they needed to be.  The standout newcomer is Chris Pine as Rex.  He joins the growing list of terrible human beings in this franchise.   Unfortunately he has decided to support his own kidnapping by blackmailing his three unprepared captors into taking even more money from his father.  If anything worked as planned, we would be disappointed so be prepared for the parade of bad decisions.  Which happens to include an epic car chase and the most unrealistic southern accents you have ever heard.

There is very little left to say other than I highly recommend this vulgar, outrageous, and successful comedy.  Successful pacing, delivery, acting, writing, and direction.  Sean Anders let the actors do their thing and they brought the script to life.  I often worry a comedy’s best jokes are sometimes at risk of being spoiled in a trailer, but there are so many in this movie you will have more than enough to surprise and entertain you.  I intend to see this one again so I can attempt to hear what lines I missed from catching my breath.  A comedy doesn’t need to be rated R to work, but in this case it’s a necessity and I welcomed every F-bomb and gratuitous innuendo.  Always clean your toothbrush before every use.  Better safe than sorry.

Synopsis: Dale, Kurt and Nick decide to start their own business but things don’t go as planned because of a slick investor, prompting the trio to pull off a harebrained and misguided kidnapping scheme.