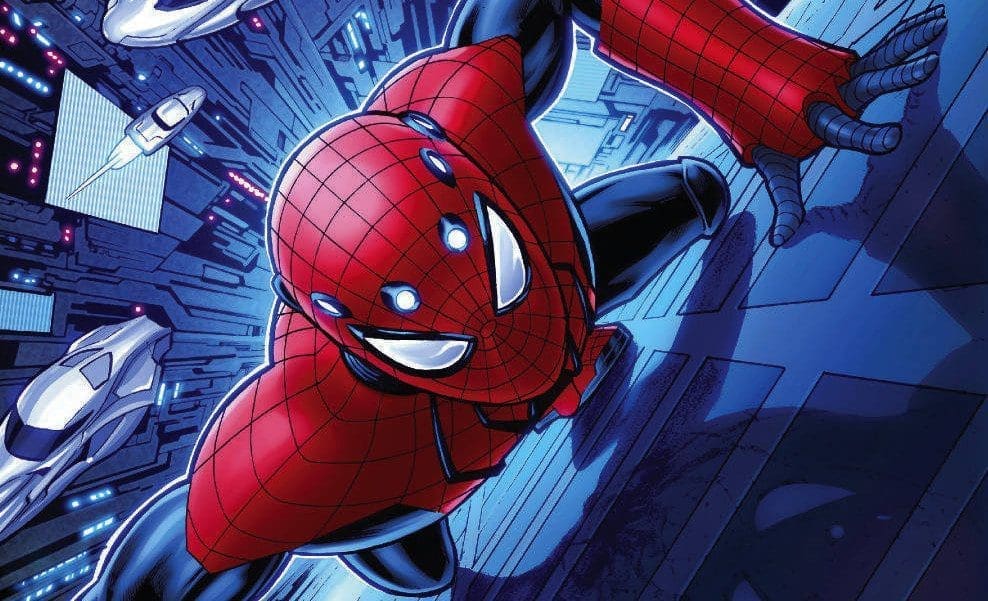 The Spider-Verse inches ever closer as every Spider-Man from every universe prepares for multiversal war against a common foe. Today, Marvel is proud to present your first look at EDGE OF SPIDER-VERSE #3 – the next chapter is the blockbuster 5-issue mini-series showcasing a new creative team and new spider character each issue! Rising star Dustin Weaver (INFINITY, Avengers) pulls triple duty as he writes,draws and colors a brand new creation – Dr. Aaron Aikman: Spider-Man!

“Unlike Peter, he chose to be Spider-Man,” says Weaver of his new creation, in an interview with Marvel.com. “He did it himself, to become a hero for his city. I guess that says a lot about the character of my Spider-Man. He’s got a big ego and being good at being Spider-Man is a point of pride. He doesn’t struggle with responsibility. He enjoys it. Other than his origin being different, he also has a completely different cast of supporting characters and villains.”

As Aikman dons the helmet of his Spider-Man suit composed of bleeding-edge technology, he confronts the evil that plagues his New York City. As the villainous Red Eye and Naahmurah wreak havoc on his world, only Spider-Man stands capable of saving the day! But is he prepared for the onslaught of Spider-Verse and the coming of Morlun? Find out when the wildly imaginative sci-fi Spider-Man makes his debut in EDGE OF SPIDER-VERSE #3 this September!

Plus, don’t miss out on these exciting Edge of Spider-Verse tie-in issues of your favorite ongoing series:

For more on Spider-Verse, visit Marvel.com and join in on the conversation on Twitter using #SpiderVerse.

To find a comic shop near you, visit www.comicshoplocator.com or call 1-888-comicbook.

Marvel Entertainment, LLC, a wholly-owned subsidiary of The Walt Disney Company, is one of the world’s most prominent character-based entertainment companies, built on a proven library of more than 8,000 characters featured in a variety of media over seventy years. Marvel utilizes its character franchises in entertainment, licensing and publishing. For more information visit www.marvel.com © MARVEL