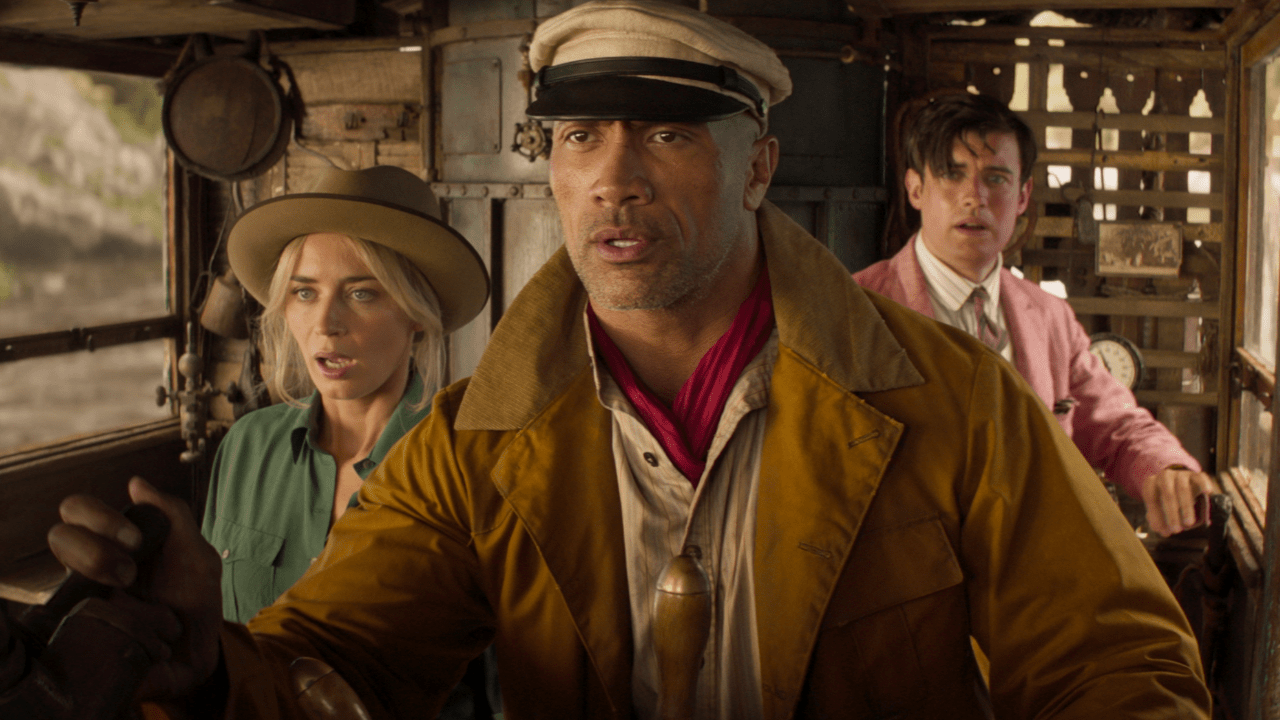 Jungle Cruise, starring Dwayne Johnson and Emily Blunt, is a fun ride (pun intended) recapturing the magic of previous adaptations of popular Disneyland rides like Pirates of the Caribbean and Tomorrowland. However, in its earnestness to recycle elements that made those previous efforts successful, it struggled to establish its own identity and only added to the less than original fare we’re used to seeing nowadays from the House of Mouse. Indiana Jones-like character? Check. Swashbuckling anti-hero with mysterious past? Check. Bumbling comic relief? Check. Villain with a tortured and sympathetic past? Check. Additional villain with true evil aspirations? Check. The tropes are all covered in this film.

However, don’t let that discourage you from investing in Premiere Access on Disney+ or even venturing out to the theaters to see the film though. It is still an action-packed romp backed up by the wonderful chemistry between Johnson’s and Blunt’s characters despite its faults. They really carried the film on a plot that has been seen one too many times before.

The film starts off with a brief back story that sets up each character’s motivations in Jungle Cruise. In the 16th century, Spanish conquistadors travels to South America in search of the ‘Tears of the Moon’, a mythical tree whose petals can cure any illness, heal any injury, and lift any curse. After most of the men die in the jungle, the survivors are nursed back to health by a local tribe using the tree petals. When they refuse to reveal the location of the tree, the Spanish destroy the village, and as punishment are cursed to never die and never be able to leave sight of the river.

Fast forward to 1916, Dr. Lily Houghton (Emily Blunt) and her brother MacGregor (Jack Whitehall) detail Lily’s research on the Tears of the Moon to an association of English explorers, explaining that the petals could revitalize medicine and aid in the war effort. Their request for access to an arrowhead recovered by Dr. Albert Falls that Lily believes is key to locating the tree falls on deaf ears. When the association denies their request, believing the tree to be a myth and a female scientist unqualified to join their ranks, Lily steals the arrowhead instead. She narrowly avoids Prince Joachim (Jesse Plemons), a German aristocrat who also wants the arrowhead and the tree.

In South America, Frank Wolff (Dwayne Johnson) takes tourists on jungle river cruises, which he embellishes with fake dangers and corny jokes. When his boat engine is repossessed by businessman Nilo (Paul Giamatti), he attempts to steal it back. Caught in the act by Lily, Frank pretends to be Nilo and arrogantly tells her that the Tears of the Moon is a myth and that she will not be able to handle the dangers of the jungle, but changes his tune when he notices that Lily is in possession of the arrowhead. Frank’s deception is revealed when the real Nilo shows up, but Lily hires Frank anyway after he underbids Nilo and bravely fights off a wild jaguar attack.

This all sets up the main plot of Jungle Cruise as Frank, Lily, and MacGregor depart into the Amazon wild in search of the mythical tree with Prince Joachim in close pursuit. While the plot of the film has been seen many times before, you’ll probably end up ignoring that by the enchanting chemistry between the film’s two leads in Johnson and Blunt. This will make you wonder why they haven’t done more movies together before and wishing they would do more moving forward. This is aided by the fact that Johnson has matured as an actor and moved beyond just action character roles (don’t fret, Johnson is still as awesome as ever in the action scenes). Blunt is always magnificent so their match-up was surprisingly the bright spot in a rather repetitive plotline.

If you’ve enjoyed past franchises like Disney’s Pirates of the Caribbean, Indiana Jones, or even The Mummy, then you’ll more than likely find similar enjoyment in Jungle Cruise. It’s a fun romp with delightful chemistry that’s worth a watch.

Synopsis: Based on Disneyland’s theme park ride, a small riverboat takes a group of travelers through a jungle filled with dangerous animals and reptiles but with a supernatural element.