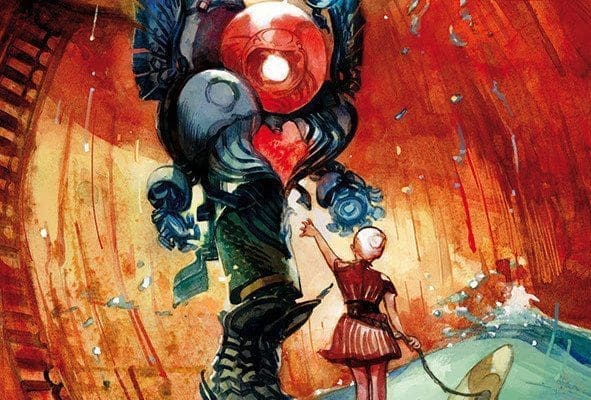 Rick Remender (BLACK SCIENCE, DEADLY CLASS) and artist Greg Tocchini (Uncanny X-Force) plunge into an underwater dystopian world in their new, highly anticipated ongoing series LOW. This #1 issue marks the launch of the science fiction series first announced at Image Expo in January and the beginning of a sure-to-be hit for fans of Remender and Tocchini’s work.

LOW is set in the distant future, after humanity has relocated to radiation-shielded cities below the sea and the surface of the planet has become a scorched uninhabitable wasteland. A probe has returned with information on a possible alternative planet for humans, but it has landed on the Earth’s surface. A few brave representatives from the warring human clans venture out to retrieve it and the hopeful news it bears.

“Low is a story about one woman’s eternal optimist against the crushing weight of a world without hope,” said Remender. “Stel’s a perfect character to examine the notion that it’s not what happens in life that defines us, but how we choose to deal with it. Working with longtime collaborator Greg Tocchini is a treat as ever. His rendering of the world of Salus is worth the cost of admission alone, which is already a steal given the first issue is 30 pages of Greg’s game-changing work.”

Fans of BLACK SCIENCE, Remender’s chart-busting sci-fi collaboration with Matteo Scalera, won’t want to miss out on the imagination-inspiring world-building and stunningly beautiful artwork of LOW.