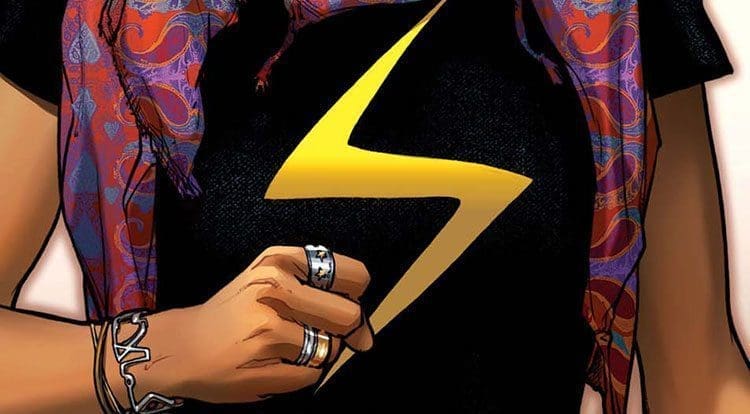 Ms. Marvel #1 represents the kind of risk worth taking in the current comic landscape and is the perfect example of how controversy can often breed unnecessary contempt. When Marvel announced it was bringing back Ms. Marvel and reimagining her as a Muslim teenager named Kamala Khan, the negative reaction of the Internet (go figure!) garnered countless headlines from major news publications, enough that even I had to wonder if the company was just trying to disrupt the status quo for the sake of publicity. It’s clear from reading Ms. Marvel #1 that this is not the case at all, although this is still very much a different take on the character as initially advertised. Remarkably, writer G. Willow Wilson is able to utilize the aspects that make Kamala stand out and parlay them into a relatable teenage protagonist, just as much as any of the more “traditional” heroes on the Marvel roster. As a white male with no culture to speak of, I was still able to find aspects of Kamala that I could sympathize with, so I imagine readers with any sort of culture in their lives will get even more out of this plight of a teenage girl at odds with her religion.

That Kamala is a Muslim teenager living in Jersey City is not paramount to who the character is, though the constant temptation of things forbidden in her faith–like bacon and boys–is a central part of what makes this character so unique from the outset of this issue. Her drive is created from a desire to be like normal American teenagers and fit in with the popular crowd and be allowed to go to parties even though *gasp* boys might be there. This is the kind of drama that fuels the lives of all teenagers, which is where the character finds its strongest connection to the reader. Beneath the surface level story of teenage rebellion, Ms. Marvel #1 finds an intriguing look at how culture shapes individuals. As much as Kamala wants to separate herself from her religion and lead a “normal” life-like the rest of her friends, those Muslim influences are still very much a part of her to the point where when she hallucinates meeting the Avengers late in the issue, they speak to her in a Sufi poem. Kamala’s brother, Aamir, shown here briefly, represents a look at the other end of the spectrum, a Muslim so devoted to his beliefs that he spends an inordinate amount of time praying and refuses to get a job that might offend Allah. For most of this issue I almost forgot this was supposed to be a superhero book, but it is, and Kamala even dons, as she puts it, the “classic, politically incorrect” costume, which should make for an even more compelling second issue.

Crafting this introduction to a new Ms. Marvel in such a unique and fascinating manner is also helped largely from artist Adriana Alphona, who should be given equal credit in the success of this first issue. Alphona’s art contains a lot of round, expressive faces not unlike a cartoon, though there’s a sense of realism to how the characters move. It’s the kind of art that could definitely define the series and thankfully, Alphona is solicited on art duties for the time being. Ian Herring places a warm color palette on Alphona’s art, accentuating the cartoon nature without taking it out of the realm of reality. For an issue that is meant to ease readers in to a brand new character, Ms. Marvel #1 is very welcoming to look at.

Ms. Marvel #1 is the kind of debut issue that is worth the entire hubbub surrounding its release. It might not be a familiar Ms. Marvel, but this version is just as accessible and is rocking the same impractical giant wedge shoes.