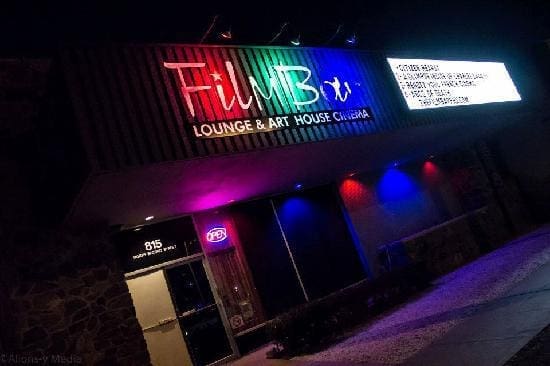 As part of its ongoing monthly film series, this March FilmBar brings your favorite Mystery films to the big screen for the whole month. Screenings of Blue Velvet (with PBR & Ear Cupcakes), The Big Lebowski (with The Dude Photo booth), The Shining (with Tricycle Races) & Clue (with Costume Contest) all in the comfort of our cinema where you can enjoy your beer & wine during the film. Tickets, show times & trailers can be found here:  http://goo.gl/ovG1JT (additional show times added during the month).

Blue Velvet. David Lynch’s sensual mystery thriller about strange happenings in a small all-American town. A college student stumbles across a bizarre mystery and wants to know more, perhaps too much more. The oblique world he’s found lurking beneath his hometown’s picture-postcard veneer is about to become violently stranger. March 8 with PABST BLUE RIBBON & March 9 with Ear Cupcakes. March 8, 9, 10

The Big Lebowski. The hilariously twisted comedy-thriller stars Jeff Bridges, John Goodman, Steve Buscemi and Julianne Moore. Join the “Dude” and his bowling buddies on their journey that blends unforgettable characters, kidnapping, a case of mistaken identity and White Russians. Enter the visually unique and entertaining world from the creative minds of the Coen brothers and remember: the Dude abides. March 15 “The Dude” Photo booth & March 17 St. Paddy’s Bowling for Drink Specials. March 15, 16, 17

The Shining. Stanley Kubrick’s epic nightmare of horror. A family heads to an isolated hotel for the winter where an evil and spiritual presence influences the father into violence, while his psychic son sees horrific forebodings from the past and of the future. March 21 with Big Wheel Tricycle Races & March 22 with Shining Trivia. March 21, 22, 23 & 24

Clue.  Was it Colonel Mustard in the study with a gun? Miss Scarlet in the billiard room with the rope? Or was it Wadsworth the butler? Meet all the notorious suspects and discover all their foul play things. You’ll love their dastardly doings as the bodies and the laughs pile up before your eyes. March 29 with Clue Costume Contest & Whodunit Game! March 29, 30, 31