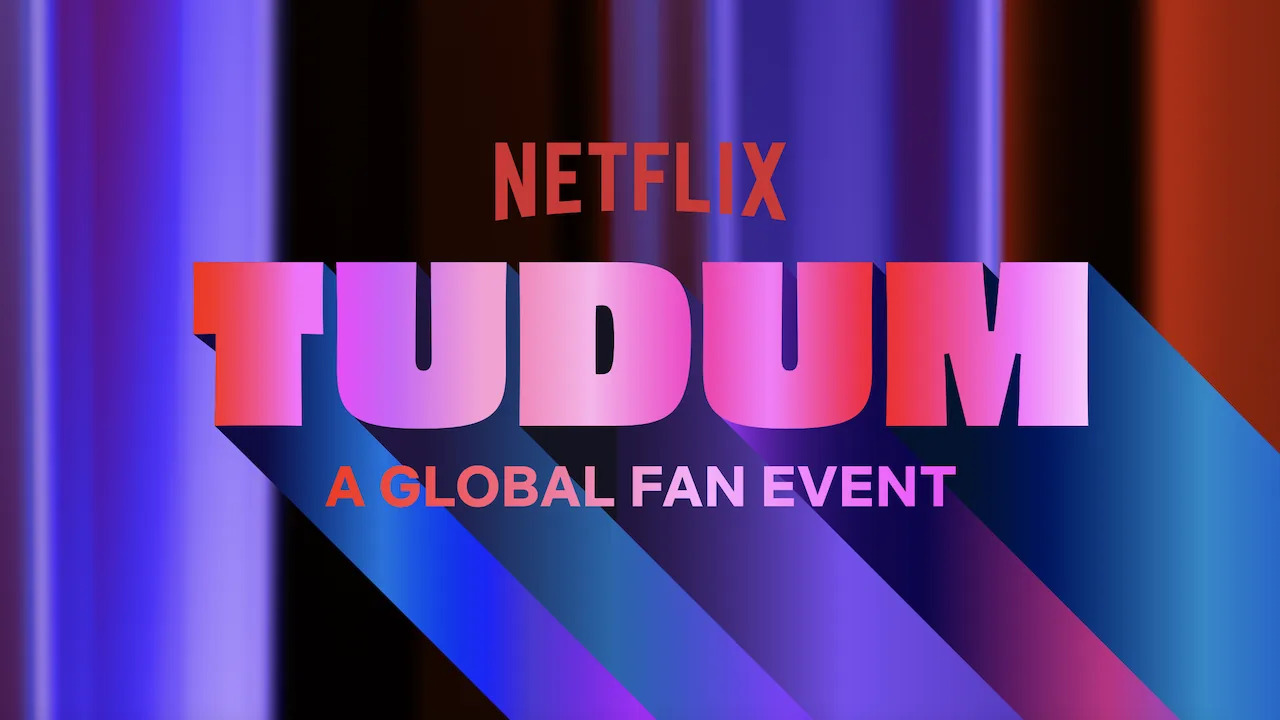 If you missed this year’s Netflix Global Fan Event “Tudum” for content in India, Japan, and Korea, here’s our recap of an exciting day of exclusive news, never-before-seen footage, trailers, and first looks, as well as interviews with Netflix’s biggest stars and creators. The free virtual event is a celebration of Netflix fandom and is dedicated to sharing the scoop on over 120 fan-favorite shows, films, specials, and games from across the globe.

Jump to KOREA
Jump to JAPAN
Jump to INDIA

After an impressive Squid Game–themed acapella introduction from MayTree to kick off the show, Tudum hosts Choi Min-ho (The Fabulous) and Cho Yi-hyun (All of Us Are Dead) kept the energy going with a dance performance from Hook — including a special message from Lee Hyun-woo (“Rio”) who shared an exclusive clip from Money Heist: Korea – Joint Economic Area Part 2.

Also on the reality series front, fans were treated to an exclusive first look at Physical: 100, a new series where 100 contestants compete to see who has the ultimate physique.

Choi Min-ho left the Tudum stage to join his The Fabulous co-star Chae Soo-bin on set to answer questions about their fashion-set drama.

Choi Min-ho and Cho Yi-hyun then announced plans for two upcoming drama series Somebody and The Glory, and presented unreleased clips from the thriller Glitch and 20th Century Girl.

After celebrating the renewals of D.P., Sweet Home and All of Us Are Dead, and presenting fans with a sizzle reel with everything they can see at Tudum: A Netflix Global Fan Event, hosts Choi Min-ho and Cho Yi-hyun were driven from the stage by monsters falling from the sky! Only one announcement could cause this to happen: Hellbound will be back.

Actress and host of Tudum Japan’s anime section Ayane Sakura welcomed fans with a special spotlight on anime, starting with a performance by composer Hiroyuki SAWANO at the Special Music Stage at Tudum Japan.

Tiger & Bunny 2 actors Hiroaki Hirata (“Wild Tiger”) and Masakazu Morita (“Barnaby Brooks Jr.”) were next to the Tudum stage with a presentation for their upcoming season.

Another new anime series, My Daemon, from writer Hirotaka Adachi saw its artwork debut during Tudum, as fans got their first look at Kento and his daemon, Anna.

New series Make My Day announced its cast of Masaomi Yamahashi, Ayahi Takagaki, Kazuhiro Yamaji, and Akio Otsuka and revealed some of the mechanical art that went into the show’s design.

Tudum viewers also got a glimpse at the new original sci-fi space horror anime series exception in a new promotional video ahead of its October 13 premiere.

Voice actors Mutsumi Tamura and Asami Seto were next to the Tudum stage with a presentation on their new anime film, Drifting Home, about two childhood friends as they drift into a mysterious sea alongside an entire housing complex.

The Seven Deadly Sins: Grudge of Edinburgh brought voice actor Ayumu Murase to the Tudum stage next with a new teaser trailer.

The Way of the Househusband announced it will return with a look at new stills from the series.

Lookism, the new animated series based on the popular Korean webtoon about a teenager who wakes up one day with a handsome face and perfect body, was announced during the Tudum event with an exclusive clip.

Actresses Rie Takahashi and Mikako Komatsu from anime adaption of the manga Romantic Killer were next to the Tudum stage with a presentation on their series about giving up the single life for dating, premiering later this year. To preview this title and more, watch the full Tudum event.

Legendary filmmaker Takashi Miike was announced as the chief director for the new anime series Onimusha, based on Capcom’s video game series of the same title. Fans got a first look at the artwork for protagonist Miyamoto Musashi, modeled after the late Japanese screen icon Toshiro Mifune.

Animation fans were treated to the teaser for the four-part animated series rooted in Japanese folklore, ONI: Thunder God’s Tale.

Netflix’s favorite office panda, Aggretsuko, will be back for Season 5 and Tudum viewers got the first look at stills from the new season.

Gudetama: An Eggcellent Adventure, the new series premiering December 14 featuring everyone’s favorite egg and chick combo, Gudetama and Shakipiyo, was featured in a special presentation with a trailer for the show.

Kento Yamazaki and Tao Tsuchiya from Alice in Borderland, Nana Mori and Natsuki Deguchi from The Makanai: Cooking for the Maiko House, and Fairouz Ai, the voice actress for “Jolyne” from JoJo’s Bizarre Adventure: STONE OCEAN appeared in a special interview “Beyond Borders” and talked about personal growth through their characters, and reaching fans outside of Japan.

Alice in Borderland fans were treated to a behind-the-scenes look at the next season as well as a discussion with cast members Kento Yamazaki, Tao Tsuchiya, Riisa Naka, Tomohisa Yamashita, and the director, Shinsuke Sato.

The next Tudum title announcement was the new series THE DAYS starring Koji Yakusho about the people on the ground working to save the country during the worst nuclear power plant accident in history.

Fans of the popular manga Chihiro-san got a teaser for the upcoming film, Call Me Chihiro which is based on the series. Kasumi Arimura plays the titular “Chihiro,” a former sex worker who works at a bento shop in a seaside town.

In a special Tudum conversation, Nana Mori (“Kiyo”)and Natsuki Deguchi (“Sumire”)and showrunner Hirokazu Kore-eda gave viewers a behind-the-scenes look at their new series The Makanai: Cooking for the Maiko House, a live-action adaptation of the manga series Kiyo in Kyoto: From the Maiko House. Set in the geisha district of Kyoto, the protagonist Kiyo becomes a Makanai (person who cooks meals) at a house where Maiko (apprentice geishas) live together.

Run for the Money has celebrities moving their feet in a teaser for this new reality show where the goal is never to be caught.

The documentary Tokyo Crime Squad: The Lucie Blackman Case examines the 2000 murder of British tourist Lucie Blackman as told through interviews with the detectives who worked on the case.

Pop fans got a peek at the new documentary LiSA Another Great Day chronicling the Rock Heroine’s behind-the-scenes work on her tenth-anniversary project LiiiiiiiiiiSA.

Can single contestants over the age of 35 find true love in a mountain retreat when whisked away from the demands of everyday life? Reality TV fans saw the first images for the new series that will try to answer this question, Love Village.

Love is in the air on the Tudum stage, as Stranger Things stars Sadie Sink, Gaten Matarazzo, Priah Ferguson, along with Ahn Hyo-seop from Business Proposal, Ji Chang-wook from The Sound of Magic, Lily Collins from Emily in Paris, Hikari Mitsushima and Takeru Satoh and from First Love, and even Gudetama share some thoughts around love and their characters in this special segment.

Based on the comic book, Burn the House Down follows a housekeeper as she works to infiltrate the Mitarai family and reclaim her family home years, starring Mei Nagano and Kyoka Suzuki.

Next on the Tudum stage, the Creators Panel: Front Line of Creative, with remarks from filmmakers and showrunners Guillermo del Toro, Lauren Schmidt Hissrich, Shinsuke Sato, and Hirokazu Kore-eda about what is like to create for both the Japanese and international audience, and what it is like to work with Netflix.

And to end the Tudum segment in Japan, a preview of First Love, starring Hikari Mitsushima and Takeru Satoh. The scripted series was inspired by Hikaru Utada’s hit songs, “First Love”(1999) and “Hatsukoi” (2018), which were released nearly two decades apart.

Next, Rana Dagubbati and his uncle Venkatesh Daggubati discussed what it was like to explore father and son relationships both on and off the screen in Rana Naidu — with a little help from Rana’s cousin.

Writer and director Vishal Bhardwaj introduced his spy-thriller film Khufiya, based on the book Escape to Nowhere by Amar Bhushanabout the true life drama in the Research and Analysis Wing, starring Tabu, Ali Fazal, and Wamiqa Gabbi.

Next up, Tudum host Prajakta Koli gave viewers a sneak peek at the new series Scoop from director Hansal Mehta, inspired by the biographical book from journalist and crime reporter Jigna Vora, Behind The Bars In Byculla: My Days in Prison, based on her experiences after being accused in the murder of another reporter.

In the comedy Kathal, actress Sanya Malhotra is a police officer investigator on the case that has all of Moba in a tizzy; who stole the jackfruit?

Actor Manoj Bajpayee gave viewers a taste of his new dark comedy Soup, co-starring Konkona Sen Sharma, and a glimpse at the recipe in a special teaser.

Back on the Tudum stage, hosts Prajakta Koli and Zakir Khan gave viewers an animated history of civilian informers — better known as CATs —  in Punjab in the 1980s, followed by a teaser for the new series CAT, featuring Randeep Hooda.

Next, a teaser for the film Qala, a period drama featuring Tripti Dimri, Swastika Mukherjee, and Babil Khan about a young singer’s search for love while dealing with a cold relationship with her mother.

Superstar Nayanthara is the focus of the new documentary, Nayanthara: Beyond the Fairy Tale — with an appearance from her new husband Vignesh Shivan, in this teaser.