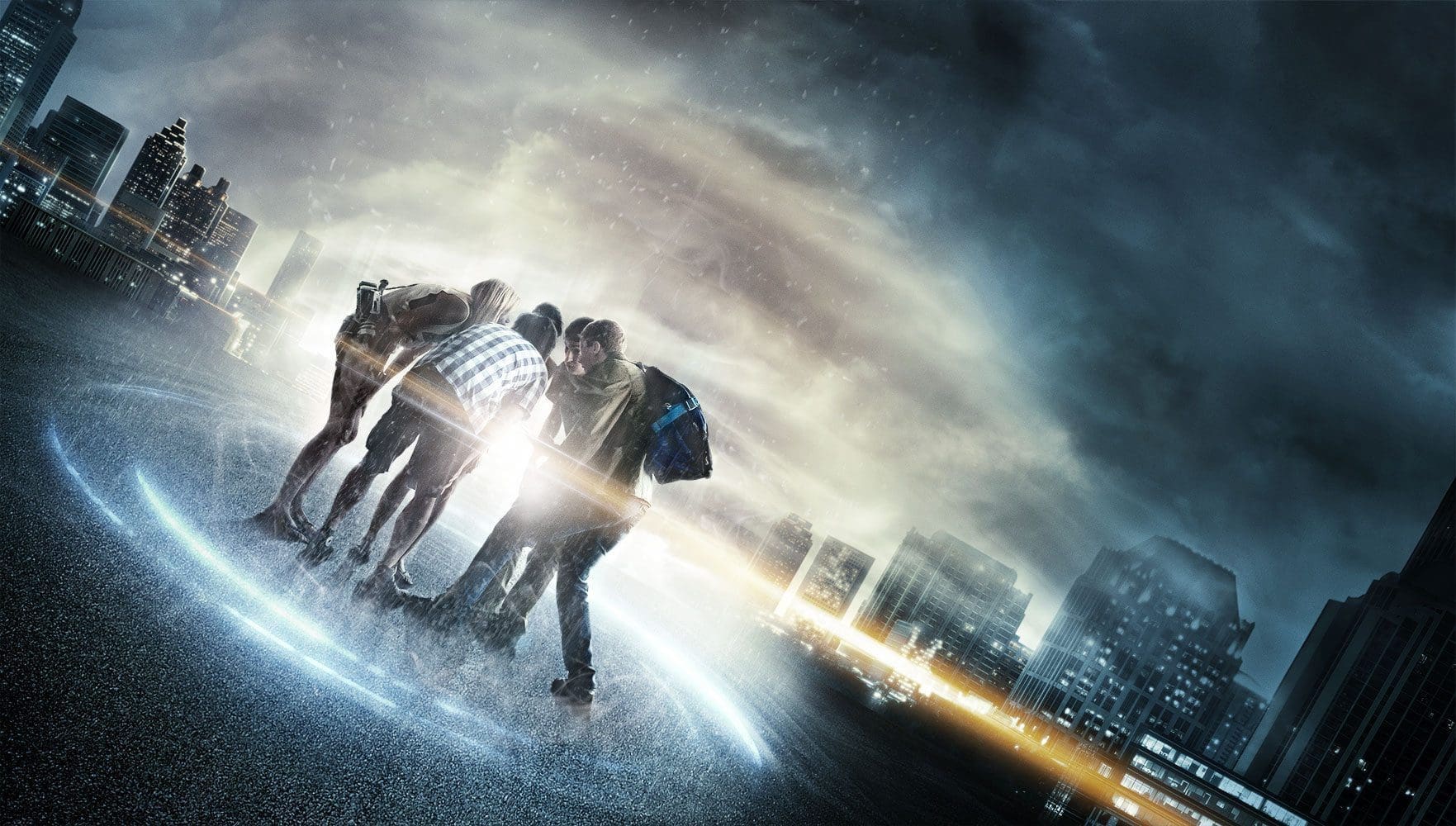 Let’s face it.  Time travel is loads of fun.  You can fix mistakes, save lives, visit dead relatives, go to concerts when bands were at their prime, and brush up on your history test if your Bill and Ted.  It’s only when you get into paradoxes that things start to unravel.  Although you could just gloss over the logic and hope the audience doesn’t notice.  Getting the science accurate isn’t the most important thing about telling a story, but when you set your own rules, you should stick to them and this movie doesn’t.

In Project Almanac, directed by Dean Israelite, David Raskin(Jonny Weston) is recording a science experiment with his high school friends Adam and Quinn.  David hopes to submit his invention to MIT along with his application for a full-ride scholarship.  Unfortunately, as amazing as his invention is, it only warrants $5000 towards his tuition.  His mom wants to sell the house to pay for his school, but David is determined to find the money some other way so he fishes through his deceased father’s stuff, since he was a scientist as well.  His sister Christina(Virginia Gardner) stumbles upon an old video camera in the attic and turns it on right away, even though the battery should have been dead years ago.  It shows what appears to be David’s seventh birthday party, in the house they still live in, and also something strange.  Himself at seventeen in a mirror at the party.  He shows his friends the video and they determine his image in the mirror was reaching for a door that leads to a laboratory in the basement.  There they discover the engine for a time machine that his father was working on.  Since David and his friends are clearly geniuses, they wasted less than two minutes deciphering his father’s paperwork and schematics to figure out how to put the machine together.  Once they do get it working, David ends up involving a girl he has a crush on named Jessie(Sofia Black-D’Elia).  They all travel back in time just one day to see if it works.  A whirlwind of energy and some static electricity and they manage to transport virtually unscathed.  Now they must decide what amazing things to do with this wonder of modern science.

This movie is shot in found footage format and is mostly filmed by David’s sister.  The found footage genre is beginning to wane as it becomes more and more difficult to find reasons for people to keep the camera on in intimate scenes, but they still attempt to do it anyway.  A nine hour concert at Lollapalooza, cut down to fifteen minutes for our sake, makes sense, but a moment in bed after having sex doesn’t.  Still if they didn’t keep the camera on, they wouldn’t have much to show us.

One of the themes the movie attempts to tackle is the cause and effect of time travel.  At first they do little things to change the past like get back at bullies, ace a chemistry test, and win the lottery.  None of this has any immediate effect since they don’t go too far back in time to see the ripples in present day.  It’s only after they travel back three months to a music festival that they begin to see the world unravel.  Forest fires, a plane crash, and other devastating events that didn’t occur in their original timeline.  While any normal person would take this very seriously, David is too wrapped up in his new relationship with Jessie, which he also changed history to make happen, to care about it.  He thinks if he makes more jumps in time, he can solve everything.  It only makes things worse and that’s when paradoxes ensue.

The biggest issue I have with this movie are the paradoxes.  They make a point early on to state that if your past self sees you, you begin to flicker and disappear.  The both of you.  With this knowledge one would think it prudent to take special precaution to avoid ever making contact with your other self; but no they seem to go out of their way to wander dangerously close to their doppelgangers all the time.  Also every time they go back to the same point in time, they never leave a trace of their last trip behind.  One scene in school is repeated several times and each time only one of them appears.  No duplicate time travelers to walk over or avoid.  I guess you could make the assumption that each trip sends them into an alternate timeline thereby explaining why they never run into each other, but that’s just how it goes.  Doctor Emmett Brown should have made a cameo to clear this logic up.  It says a lot that Michael Bay is a producer on this film.  Who cares about logic when exciting things are happening on screen.  I would agree up until the ending when the movie cops out.

I can’t necessarily recommend this for Sci-Fi fans since there are other time travel movies that deal with the topics explored in this film better.  If you haven’t gotten sick of found footage films, this should still excite you.  The action does pick up near the end and it culminates to an almost predictable ending.  With that in mind, it is still a fun watch and there are some good laughs at the antics these teenagers pull off.  If I was to recommend a time travel movie involving high school kids and a science project, I would suggest My Science Project from 1985.  It’s a little dated, but it’s definitely worth a watch.

Synopsis: A group of teens discover secret plans of a time machine, and construct one. However, things start to get out of control.