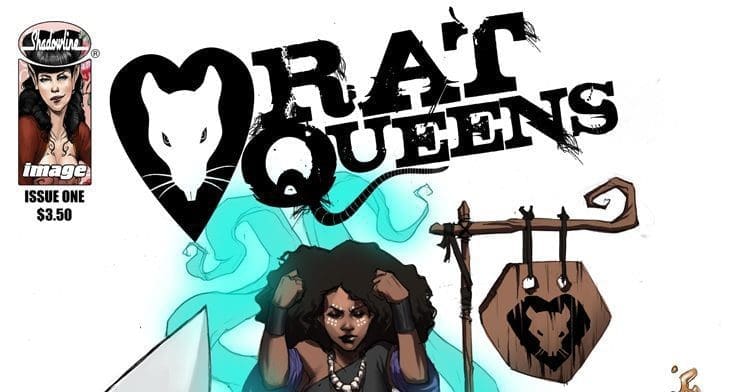 You almost don’t know where to begin to review a book like Kurtis Wiebe’s Rat Queens #1 because it’s such a rarity to have a book hit all of the right notes on its first attempt that it’s a wonder other books can’t mimic this success. It’s one-part DC’s Suicide Squad and another part role-playing game, and the two are mashed together into an insanely inventive world that I immediately want to know everything about, starting with our four female heroines. These foul-mouthed, bar-brawling rapscallions aren’t going to win anyone over with their charm, or their class, or their manners for that matter, but their further adventures in the pages of Rat Queens are bound to be the stuff of legends. I haven’t wanted to read the next issue of a comic this bad since I read the first issue of Saga.

Palisade used to thrive on peace, quiet, and commerce but now the streets have run rampant with crimes and misdemeanors. In an effort to eliminate what is felt to be the primary concern for the city’s well being, the mayor offers four troublemakers named Betty, Hannah, Dee, and Violet the option of release from Palisade’s dungeon if they complete a dangerous quest. To call this an adventure book is to undermine the butt kicking, cursing, and bloodshed that goes on within these pages as our four heroines drop jokes faster than they swing their weapons. These aren’t meant to be female role models Weibe is writing; in fact they’re cruder than most online gamers, but they’re a thousand times more enjoyable to read about.

Roc Upchurch’s art is whimsical and fun, almost giving the false impression that he’s illustrating a children’s book, though that false reality is immediately shattered with the splash page introducing the four main characters. All four ladies are standing ready for battle (well, almost all) and their posture tells the reader all we need to know about how awesome they are. Plus, there are bodies strewn about and a naked man tied to a pole for no good reason. Weibe and Upchurch could sell this book with just that splash page alone, but their generosity to fill the issue with so much more is gratifying. If you haven’t figured it out already, you should read Rat Queens.