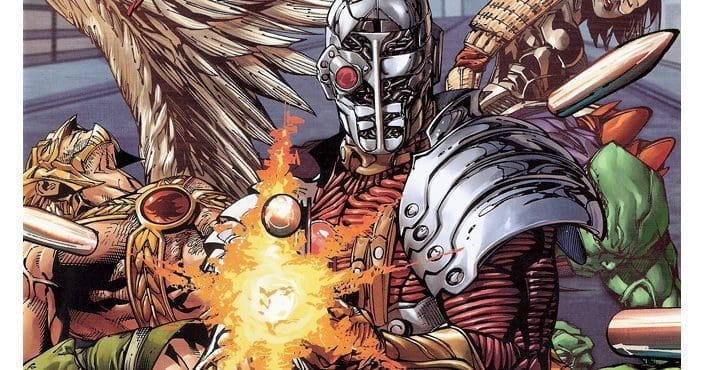 Justice League of America 7.1: Deadshot kicked off JLA’s part of villains month. Deadshot may not be as well known as other villains, but you sure as hell have to respect his skills! He is known as “The world’s greatest assassin” and has never missed his target except for one man (The Dark Knight!). Using a mix of homemade bullets and microchip technology, Deadshot can be a force to be reckoned with. Now that I hyped him up, let’s how the comic represents his awesomeness.

The the story takes place back when a young Floyd Lawton (Deadshot) is in his room with his kid sister reading a book while their parents are talking in the kitchen. The nice calm atmosphere suddenly changes for the worst when his home is hit by a storm of bullets killing his entire family.  Fueled with rage, Floyd begins his training that leads him to become a sharpshooting assassin for revenge. After he seeks out the people involved that ruined his life, a crime boss hires him to do an array of different hits for him. Cut to present day, the crime boss that initially hired Deadshot is now his target, and boy does he have a surprise for him!

The story for this comic was done by Matt Kindt (Justice League of America) and I have say, he is a great choice for this. Even though Deadshot’s origin story is a little slow, the way Matt Kindt set up his back story and related it to the present day was very well done. Essentially, he fit two different stories in one 30 page comic and made it tie in with one another. I was also a fan of how he wrote the transition between a young Floyd Lawton to the deadly Deadshot. It did not feel rushed, rather it showed how Deadshot became incredible with firearms by trial and error.

The Art was done by Carmen Carnero and Bit in the past sequence of the first half of the comic. The second half (present day) was done by Sami Basri and Keith Champagne. The way Carmen Carnero drew the scene on how the bullets came raining down on the house was great. How she panned the scene from outside the wall to Floyd’s room was very well done, and i hope to see more of Carmen’s work because of this. As for the second half, I was a big fan of Sami Basri’s facial expressions that he put on people’s faces, like Amanda Waller. Those expressions really allowed Matt Kindt’s story to shine a little brighter.

The origin story of Deadshot was very organized and easy flowing to the transition to present day. Even the present day scenes were done very well to the end. The art style was good, and definitely helped portray the scenes to the story. I am looking forward to seeing what Matt Kindt has in store for Deadshot and the Suicide Squad in the Forever Evil tie-in next month.