Geek News Network
Home Voices Interviews Ripley’s is 100 Years Old…Believe it or Not! 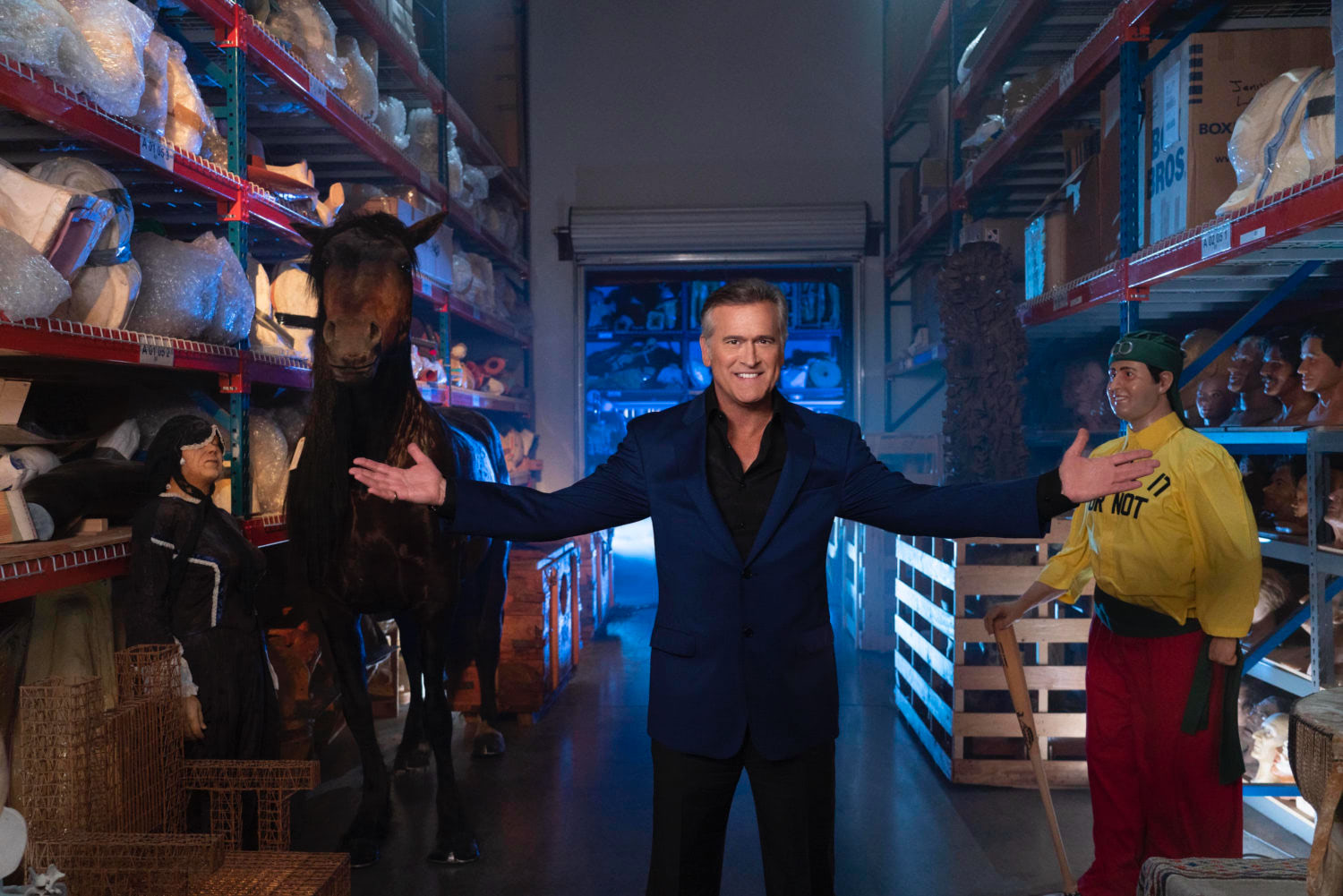 In 1918, a cartoonist, entrepreneur, and amateur anthropologist named Robert Ripley got the idea to pull together some previously-drawn cartoons of unusual sports feats he had drawn but not published. When he submitted those cartoons, he probably had no idea what he was starting.

Over the next 10-plus years, Ripley traveled the world collecting interesting stories.  In 1930, Ripley continued his travels, but also began recording live radio shows in odd and interesting places.  In 1933, Ripley first displayed his oddities at the World’s Fair in Chicago, Illinois.  Over the years, this collection has contained interesting, rare, and downright bizarre items and exhibits, including shrunken heads, vampire-hunting kits, art made of toast, statues of two-headed cows, an actual iron maiden, and a giant ball of human hair. In honor of the 100-year anniversary, Ripley’s has procured even more interesting items, including a lightsaber and blaster that were used in the Star Wars movies.

Today, there are over 30 Believe It or Not! Odditoriums around the world.

Scott (GNN): All right. Scott Muller here for GNN with Sabrina from Ripley’s Believe It or Not! Thanks for taking the time to talk with me.

Sabrina (SS): Of course. Thank you.

SS: Well, that’s why we call it an odditorium. There’s a little bit of everything in there, from interactive to strange exhibits, and amazing art. So, it’s not just your sterile museum. You can really kind of get in there and interact with these pieces and see things you’re not going to see anywhere else. They’re all incredibly hard to believe, but undeniably true.

GNN: Being a Floridian I’ve been to a Ripley’s Believe It or Not! museum, but when I attended, it was 10, 15 years ago, and I remember the oddities like two-headed animals. Now, I’m noticing from the displays, I see you have a lightsaber here from Star Wars and you have Han Solo’s blaster. When was the transition? Has that been a thing I just missed or was that something a recent addition, the memorabilia aspect of it?

SS: So, we still have those very quintessential Ripley exhibits. Even here at the booth, we’ve got our shrunken heads, our two-headed cow skulls, our iron maiden. But it is our 100th-year anniversary this year so it was really time to kind of take a step back and see where we want to go for those next 100 years. At the very core of our Ripley’s exhibits is stuff that you could really only see here, so these movie props that you see are one of a kind. So, if they’re at Ripley’s, you’re only seeing them at Ripley’s, but there’s also “believe-it-or-nots” behind them. Like with the lightsaber, did you know that was made out of a camera flash?

SS: So, it’s a Graflex camera, and if you actually look at it, that red button is the camera flash button. You see how it says Graflex on there?

SS: It’s literally just stripped right off of a camera, added a couple things, and then it was screen-used in Empire Strikes Back when Luke Skywalker was captured by the wampa and he was reaching for that lightsaber in the snow.

GNN: You realize that you just broke a million Star Wars fans hearts telling them that the lightsaber was really a camera?

SS: I’m so sorry! But it’s that, “believe it or not.” A lot of people don’t know that and you’re kind of telling the other side of it.

GNN: No, it’s cool to see the story behind it — you’re not just seeing a thing. That’s one of my problems with some museums; you see a painting and you’d like to know the story and sometimes they don’t have that.

GNN: I know people reading this interview can’t see it, but I can see the letter of authenticity right here explaining that it’s a legit movie-used prop which is pretty cool.

SS: We actually got it from one of the producers, Gary Kurtz.

GNN: Nice. Nice. All right, so we know people love lists. They love ranking stuff. That being the case, what are the three most popular things at your museum for you and for other people? What are your favorite things in the museum?

SS:  See, I have a real creepy side. I love the taxidermy side, the animals, but we have some really amazing art too. Obviously, I love shrunken heads. I think that’s become really quintessential to Ripley’s, so it’s probably on my list and the Ripley list. I personally love this toast art that we have. We have portraits made of toast, burnt into toast, even this probably eight-foot tall crucifix of toast, Einstein on toast. It’s pretty wonderful. And third for me, I mean, I don’t like it at all by any means, but it is that hairball. It’s pretty gnarly, but it makes me squirm a little bit and that’s how I can appreciate it. I would never want to touch it, but I think it’s so true to us. And the fact that we can kind of bring our guests in and make them part of the Ripley collection forever, honestly, could probably repopulate the Earth with the amount of DNA on that thing, I think that’s really cool. We have tons of interactives, but this thing is like an analog interactive almost.

GNN: So, anybody who comes to the Ripley’s Believe It or Not! museum can contribute hair to that hairball?

SS: If the hairball is there. We have 30 Believe It or Not! museums in 10 different countries and the hairball’s currently on tour at these cons, so if you can catch up with the hairball you can contribute to it.

GNN: For folks that are bald like me, they can contribute arm or beard hair?

SS: As long as it’s human hair. So, at these cons, there’s a lot of wigs. But yeah, we’ll snip a beard, we’ll snip some arm hair, whatever it takes.

GNN: Okay. And yeah, so how long has it been since you’ve started traveling? Does this go to cons frequently? Is this a recent thing or…?

SS: It’s a recent thing for our 100th-year anniversary. It’s kind of getting in front of that new crowds, and we’re relaunching our show. Ripley’s Believe It or Not is now hosted by Bruce Campbell on Travel Channel. It’ll be premiering June 9th. So, of course, Campbell definitely has this appeal.

SS: So, I think making that connection with our new audience who really should be familiar with the Ripley’s brand because it’s got that niche. Everyone’s a little odd; everyone’s a little quirky. It’s super inclusive. It’s kind of putting those pieces together was our goal here.

GNN: Yeah, Robert Ripley was an interesting looking and acting dude. I remember reading his story. Where was the first Ripley’s location? I’ve been to the one in St Augustine, Florida…

SS: So, that’s the oldest odditorium. Robert Ripley actually had intentions on moving in there and living there himself, but the very first one was at the World’s Fair. Now, there are 30 Believe It or Not! museums, but Ripley Entertainment has over 100 attractions.

GNN: Oh, wow. And we have one right here in Orlando, Florida. I mean, within walking distance here of the [Orange County] Convention Center.

SS: Sinking down into a sinkhole, that slanted building right on International Drive!

SS: I think it depends on the age. I think we have something for everybody. The vampire-killing kit is definitely very popular for people wondering what the story is behind that. But when we’re at cons, these movie props are huge. Yeah.

GNN: Sure. Sure. All right. Well, I appreciate you taking the time.

GNN: And there’s so many folks here and you’re doing the 100-year anniversary thing for all of 2019?

SS: Absolutely. We’ll even be at San Diego Comic-Con with a little something different.

GNN:  Excellent. Thanks for your time!