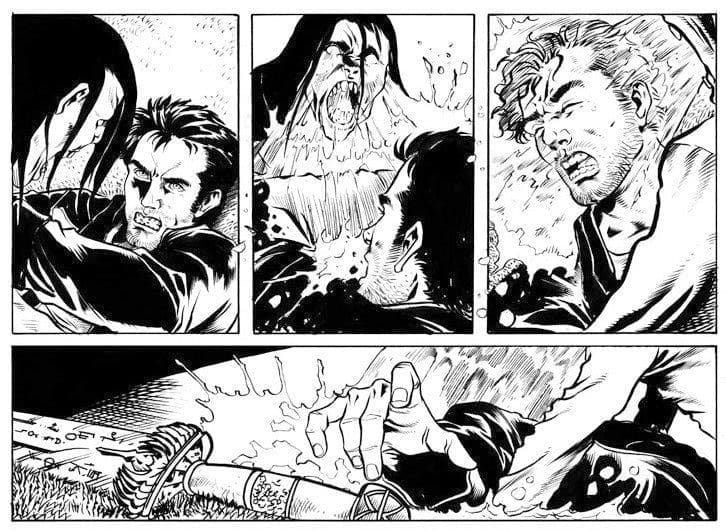 The much esteemed Rourke the Hexbuster comic book is now in digital format at DriveThruComics and ComiXology. Comic book fans from around the world are elated that Federico Memola’s horror series is now available on their devices.

London, United Kingdom. June 6th, 2014. DieGo Comic Publishing is the only publisher in the United Kingdom that focuses on some of the best­selling Italian comic books intended for a teenage and adult audience.

“Italy has a rich comic book scene: something that needs to be shared with a global community,” says Giuseppe Pennestri, CEO of DieGo.

What is Rourke about?

Rourke the Hexbuster is a horror­fantasy series of graphic novels set in Ireland, and teeming with demons, magic, witches, and other supernatural horrors. Rourke, the protagonist, is a dark anti­hero created in the great mind of Italian writer Federico Memola. He is a troubled, stubborn, and often­inebriated hero who shoulders a great burden – he has the ability to take on curses bestowed upon others onto himself, so that he might save the victims from their suffering. It is good business, but

he also has to look after his young daughter, Kylie. Or rather, she has to look after him. In the first episode, Moon Worshippers, the dysfunctional pair trailblazes through Ireland to the town of Kilkenny, to help Fiona: a young girl hit by a curse. Unfortunately, a mysterious ecclesiastical sect is also interested in Fiona for unknown reasons.

Federico Memola, who lives in Milan, is one of the most prolific new­generation graphic novelists for young adults (15 and older), and adults. His most successful series is Jonathan Steele: a futuristic fantasy that has been published for more than 100 monthly volumes of 96 pages each; Enchantment Agency, which we’ll be publishing, was born as a spin­off of Jonathan Steele. In his 20 year long career Memola has created five more series: La Stirpe di Elan, Legione Stellare, Moon Police Dpt., and Henry Moon, and he wrote several episodes for various Bonelli Comics characters.

DieGo presented a paperback volume for Rourke the Hexbuster containing the first two episodes of the series at the 2013 MCM London Comic Con, where it was well received.

Rourke was first published in Italy between 2009 and 2010, in a series of eight episodes ­ 96 pages b/w ­ that will now be published monthly by DieGo in English.

Moon Worshippers can be purchased for $3.99 at the following link http://comics.drivethrustuff.com/product/130254/Rourke­the­Hexbuster&src=PRJUNE

The paperback volume of Rourke the Hexbuster ­ 204 pages b/w ­ costing £15.99 ­ can still be purchased at www.diegopublishing.co.uk