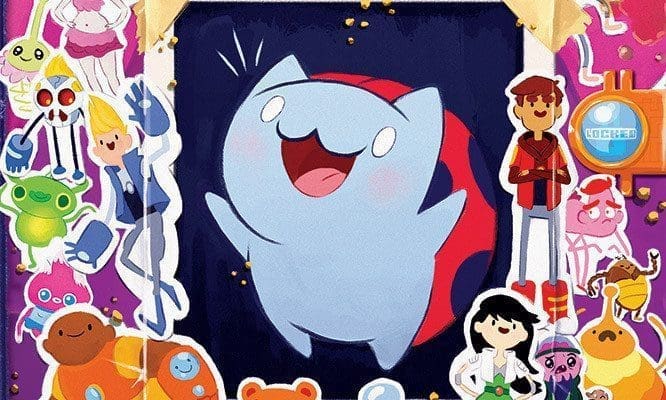 Published under the company’s Perfect Square imprint, the hardcover books, BRAVEST WARRIORS PRESENTS: CATBUG’S TREASURE BOOK and BRAVEST WARRIORS: THE SEARCH FOR CATBUG, each blend the dynamic action, irreverent comedy and unique characters that have made the animated series created by Pendleton Ward (Adventure Time) a massive YouTube hit.

In these new books, Bravest Warriors fans get a peek into Catbug’s innermost thoughts in the diary-like CATBUG’S TREASURE BOOK, while THE SEARCH FOR CATBUG is a beautiful seek-and-find full-color collection of illustrations from more than two dozen top pop culture and comics artists, highlighting the Bravest Warriors and their continuing search throughout the galaxy for Catbug.

Says Catbug: “This book has all my secret treasures and oregano dreams! ALSO FIRE! I will share them with you because you are my friend, but it has to be our secret, okay? I love you Treasure Book!” BRAVEST WARRIORS: THE SEARCH FOR CATBUG · “Journey across the dimensional divide with the irrepressible Catbug in this unique pair of releases, guaranteed to bring smiles to BRAVEST WARRIOR fans of all ages,” says Beth Kawasaki, Senior Editorial Director, Perfect Square. “We’re thrilled to feature work from a dynamic team of artists on these collectible full-color hardcover editions of BRAVEST WARRIORS PRESENTS: CATBUG’S TREASURE BOOK and BRAVEST WARRIORS: THE SEARCH FOR CATBUG!”

BRAVEST WARRIORS is a hit series on YouTube’s Cartoon Hangover and is the newest acclaimed animated creation from Pendleton Ward, the visionary creator of the Emmy Award-winning Cartoon Network show Adventure Time. In BRAVEST WARRIORS, four teenage travelers traverse the universe saving those in need…though not always in the way you’d expect…in fact…never! Along the way they meet aliens, phantoms and other inter-dimensional beings – including everyone’s favorite, Catbug. Sometimes…they even meet themselves!

VIZ Media’s Perfect Square imprint focuses on delivering original comics, manga (graphic novels) and other children’s books with an emphasis on strong storytelling, eye-popping graphics, empowering themes, and a dash of irreverence, that captures the imagination of a whole new generation.

Additional information on titles published by Perfect Square is available at www.PerfectSquare.com.

For more information on other manga titles from VIZ Media, please visit www.VIZ.com.