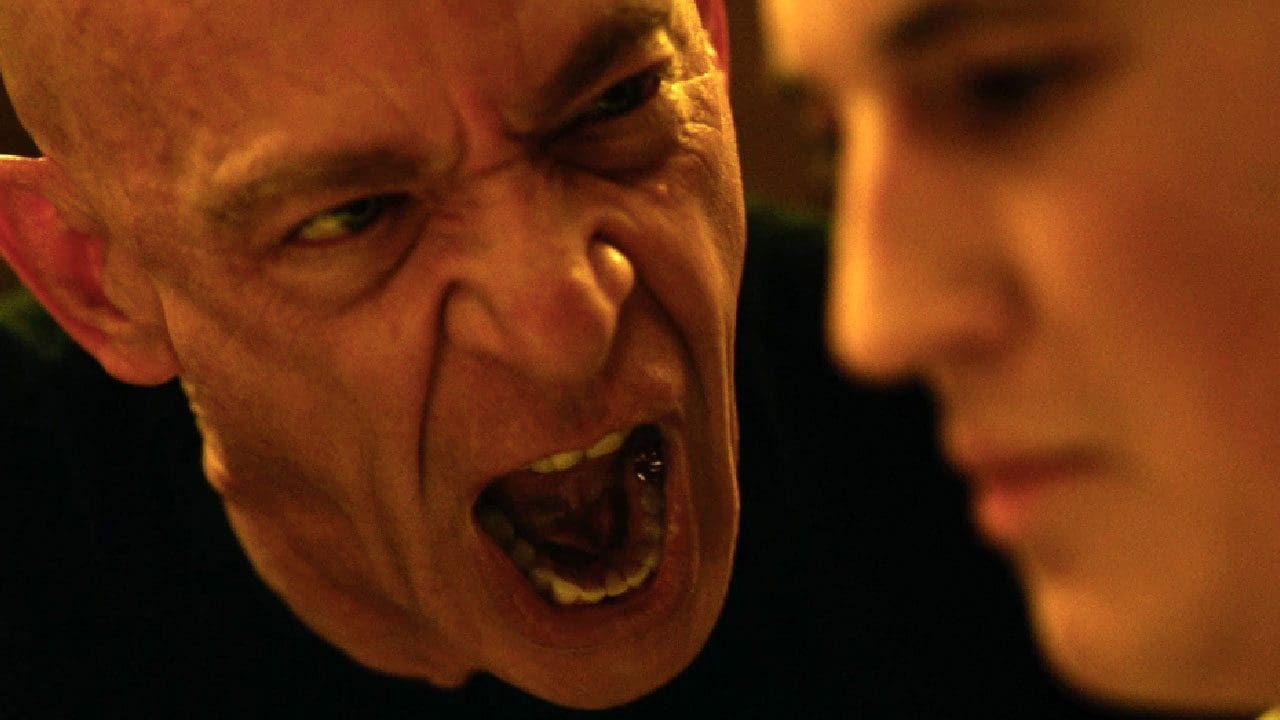 Just keep the tempo.  Just keep the tempo.  How hard is that?  I can admit, for me, it’s pretty damn hard.  The rhythm, the beats, the change-ups, and, on top of that, trying to synchronize your intensity with everyone else on stage.  It takes a special kind of passion to harness that talent within you and ignore any doubt or discouragement.  You might make it on your own developing that ability, but the more sensible approach would be getting an amazing music teacher.  Even better an amazing music teacher finding you.  Someone who can pinpoint your talent and pull it out of you.  Leaving nothing left to worry over but purified genius waiting for their cue.

In the film Whiplash, written and directed by Damien Chazelle, Andrew(Miles Teller) is a drummer who focuses on jazz music at a New York conservatory.  A chance encounter with Terence Fletcher(J.K. Simmons), the prominent music teacher at the school, brings Andrew into one of the most intense classes of his entire life.  Fletcher has a way of making his new students feel invited, but once the music starts he wastes no time in getting you to correct your errors.  No matter how many times it takes.  It’s a motivation that Andrew welcomes even as his practices begin to drown out the rest of his time outside of class.  He meets a girl named Nicole(Melissa Benoist) who works a movie theater he frequents with his father(Paul Reiser), but eventually he can’t spare a moment unless it involves putting stick to snare or cymbal.  He exudes confidence initially, having stumbled on such a lucky break, but that positive attitude is soon replaced by insufferable agony as he attempts to satisfy his teacher’s expectations.

His biggest problem is he can’t play fast enough for Fletcher.  He plays hours and hours trying to find the strength and skill to keep tempo, with wounds opening and reopening on his fingers, but it continues to elude him.  His excitement for drums transforms into unrewarding obsession.  Andrew is chasing a dream that Fletcher is more than willing to hand over to someone else.  His emotions and his mind battle his body, weary from practice fatigue, yet he refuses to let Fletcher get the better of him.

One of the highlights of this movie is the jazz performances; which are played almost always in their entirety.  The editing of these scenes is very well done with cuts to individual instruments and back to the conductor in almost a matching rhythm to the music itself.  The professional skill of the performers is beyond impressive.  I am glued to the screen with each note and just want them to keep going.  The results at least make you appreciate Fletcher’s methods for the time being.

Miles Teller shows amazing intensity throughout his whole body as he plays his drums.  His character finds inspiration from great jazz musicians like Buddy Rich and Charlie Parker.  The latter being used as an example of someone who faced humiliation on stage and overcame it by practicing fiercely; which led him to win back the respect of his peers.  All that pressure is seen on Miles Teller’s face as he takes his chance at greatness.  If he wasn’t actually playing those drums, you wouldn’t know it by how well he committed to the part.  The veins protruding from his neck and arms, the labored breathing and sweat pouring over him, and the determination in his eyes.  An example of someone who can get lost in their own character, but I’m sure Miles enjoyed taking Andrew there as much as Andrew loved discovering his musical talent, when he wasn’t brooding over Fletcher’s criticisms.

J.K. Simmons is the other half of this great film.  His performance as Fletcher is stellar and comparable to R.Lee Ermey as Gunnery Sgt. Hartman from Full Metal Jacket, who stole the movie when he berated Vincent D’Onofrio’s character for the first half hour.  Luckily we get Fletcher a whole lot longer.  Fletcher has a specific method that can drive his students mad, but it gets results so they put up with it.  He plays games with their emotions, but only to inspire them to find their true voice through their instrument.  However he feels that reaching someone’s breaking point should be a learning experience and not something to avoid.  He abhors the coddling of mediocrity, which he believes is the downfall of jazz music in the modern age.  All that abrupt energy is balanced by a gentle demeanor when practice is truly over.  Simmons seems to treat his character like an instrument utilizing soft notes in public and brute, harsh notes in class.  It’s an effortless display of acting and one I hope his peers recognize come awards season.

The best thing I can say about Whiplash is that it does an excellent job of portraying a definitive musical experience in a high-level professional environment such as the emotional isolation and nerve-wracking obsessiveness to impress everyone.  Andrew could have just been a great jazz drummer, but he wanted to be renowned.  Whether that requires self-imposed isolation is up for debate.  Some people can balance a happy life with an arduous career in professional music, but we don’t often hear those happy-go-lucky stories fifty years down the line.  The stuff of legend is usually cut short by tragedy, like a bright flame that burns all it’s fuel in a very short time.  We might criticize their downfalls, but we still admire their albums.

I recommend Whiplash enthusiastically and encourage you to see this one with a friend who does play an instrument or intends to pursue a career in a related profession.  I’d be interested to hear their opinion on the subject.  The final scene in this movie is remarkably satisfying with a showstopping performance that will take the breath out of you.  When someone puts their heart and soul into their work, you’d be lucky to witness it firsthand because something that amazing really is a rare thing.  Fortunately this time it’s on film.

Synopsis: A promising young drummer enrolls at a cutthroat music conservatory where his dreams of greatness are mentored by an instructor who will stop at nothing to realize a student’s potential.