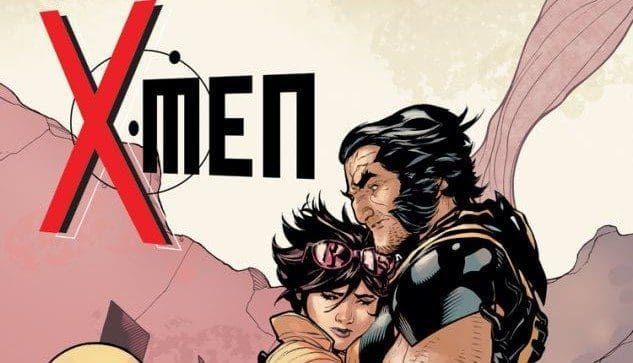 Before the ten-issue crossover event “Battle of the Atom” can begin next month, the all-female team in X-Men #4 have personal business to attend to. Fallout from the previous arc in the series has left Storm and Rachel Grey at opposing ends of the morality spectrum, and the outwardly effects of their quarrels are being felt within the rest of the team. If there’s one thing we’ve learned so far in this phenomenal series it’s that the X-Men don’t just deal with their own internal problems and put the world’s troubles on hold, these X-Men work through their quibbles best while preventing a local catastrophe.

Almost immediately, the threat of a crashing aircraft puts the slightly fractured X-Men team into action, serving up a calamitous backdrop for the dissent among the troop. There’s legitimate concern from Rachel that Storm, who in the previous issue ordered to have the Arkea-infected Karima killed if need be, could jeopardize the lives of any of her other brethren if the situation called for it. In Storm’s mind, she only considered making the decision and it was a tactical choice to protect the rest of her team. Throughout the issue both characters are completely rationalized in their thoughts and by the end, there’s no Team Rachel or Team Storm; it’s two decidedly different means of thinking working together. There’s no wrong or right in this argument, and writer Brian Wood recognizes that despite the differences between these two characters, both are doing the right thing.

Injecting a bit of lightheartedness into an otherwise panic-fuelled situation has been Wood’s forte in this series thus far, and here, he outdoes himself. In the middle of the rescue mission, with the Blackbird tethered to the falling civilian aircraft, Rogue takes a moment to fist bump with a little girl through the window of the falling plane. Not as a means of reassurance, but just her pure confidence. She knows she’s got this and she’s having a blast doing it.

Interspersed throughout the issue are scenes of Jubilee (with infant Shogo in toe) and Wolverine hanging out reliving their first encounter with one another. Each scene delves a little deeper into Jubilee’s past and provides a summation of her origin for those unsure, but there’s not much substance here. Not to mention the idea that Logan would purchase Jubilee’s old family home comes off as too sentimental for the character and this book.

Although the initial setup for X-Men #4 is rife with opportunities for the plot to be bogged down with word bubbles of finger-pointing and various other quibbles between Storm and Rachel, this is thankfully not the case. Wood tempers the quarrels of the group in the face of imminent danger, putting the external conflict first-and-foremost to show just how committed this team is to their cause. His X-Men demonstrate a willingness of the entire team to get the job done, then fight amongst themselves, but still find time for a fist bump every now and again.