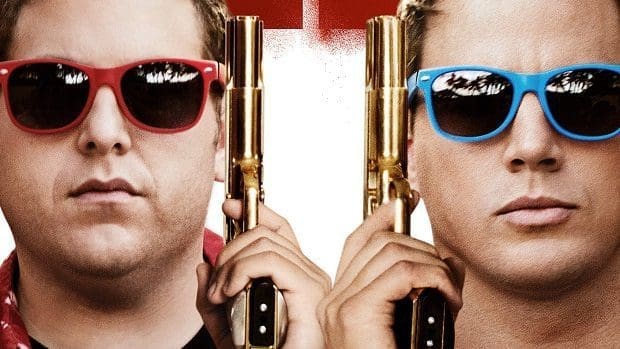 The hardest part of reviewing a comedy is explaining the funny parts without spoiling the jokes.  The original 21 Jump Street was a surprise success and in hindsight just another win for directors Phil Lord and Christopher Miller.  Their work on Cloudy With a Chance of Meatballs and The Lego Movie is terrific.  They’ve crafted a definitive style of quick one-liners and witty tongue-in-cheek humor which elevates the narrative into genuine entertainment.  So how do they handle a sequel to one of their blockbusters.  They make fun of it.

In 22 Jump Street we are reintroduced quickly to Officers Schmidt and Jenko (Jonah Hill and Channing Tatum) as they are being given their next assignment by Captain Dickson(Ice Cube).  They need to impersonate average age college students in order to bring down a drug ring involved in a murder.  It might sound like a familiar scenario, but don’t worry cause the writers and directors know full well this is a sequel and use that to their advantage.

The usual scenes of college life are explored here.  Jenko makes friends with a friendly football player and gets in good with a frat while Schmidt meets a girl and pretends to know poetry and converse with art majors.  The chemistry of these two as a team is the real magic of this movie.  Their relationship as partners is explored more deeply here with hilarious consequences.  The movie also shows off Channing Tatum’s obvious athletic abilities in contrast to Jonah Hill.

A character worth mentioning is Mercedes(Jillian Bell), who plays the roommate of Schmidt’s girlfriend.  She gives Schmidt a hard time about his obvious much older age every chance she gets and the scenes they share are a highlight.  There’s also Jenko’s new friend and fellow college athlete Zook (Wyatt Russell), who has a somewhat symbiotic personality that’s cute in a dumb jock kind of way.  Ice Cube gets a bigger role this time around and holds his own on screen with Hill and Tatum.

The writing I mentioned has plenty of quick jokes Lord and Miller are known for and some of the funniest ones make light of the idea of a movie sequel.  Bigger and better with more money, but a copycat storyline.  Hangover 2?  In 22 Jump Street, it’s never forgotten what this movie is; and you get to laugh at all the jabs it gives itself.  There’s also some great back and forth between the characters who are more interested in shooting their mouths off than firing their guns.

What you have here is a great comedy disguised as a sequel because, unlike previous sequels, this comedy stands on its own.  There are some nice nods to the original and great cameos as well, but overall it’s a better movie.  The thing that makes these movies work and cements the humor is the bromance between our two main characters and the ability of these actors to make arguing look funny.  Sometimes all it takes is a facial gesture.  Again very difficult to describe a comedy without spoiling it, but to summarize it’s another win in Lord and Miller’s corner.

I recommend this movie for Jonah Hill and Channing Tatum alone, but also for the writing and clever ending.  Enjoy the credits as well.  Lord and Miller make good use of that R rating.

Synopsis: After making their way through high school (twice), big changes are in store for officers Schmidt and Jenko when they go deep undercover at a local college.