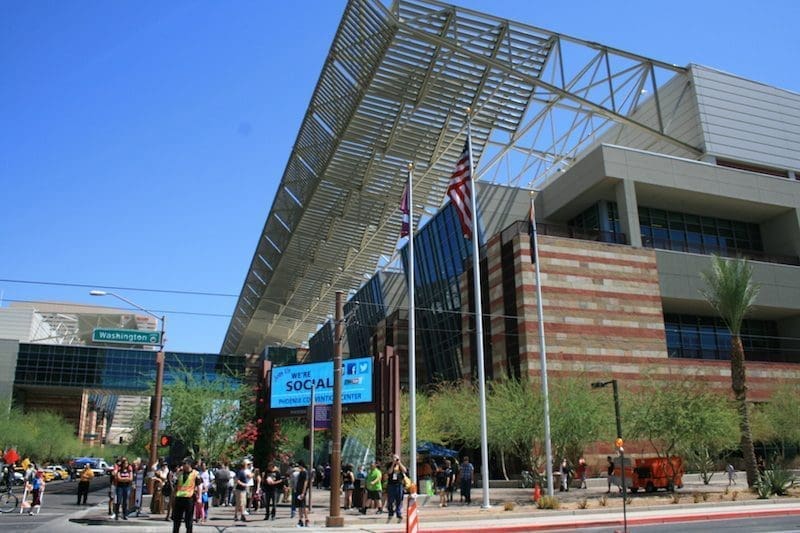 There were times during Phoenix Comicon 2014 that it was difficult to accept the fact that the convention was growing up right before me; seeing the larger crowd on Thursday evening meant there would subsequently be longer lines as the weekend went on, leaving less time to explore all that the convention has to offer. Anyone that attended the convention on Saturday and attempted to sit in on one of the panels in the North Ballroom 120 experienced this first hand as the crowds to get into the celebrity panels throughout the day grew and grew while the Ballroom size unfortunately, could not. Here’s a secret, though:  The North Ballroom 120 is not emptied after each panel concludes. Those that arrived for a panel earlier in the day were able to stay through to the next panel, and the next one, and the next one. With hundreds of fans being turned away before each panel due to the Ballroom being already at capacity, I have to imagine the practice of “camping” will be retooled for next year’s event.

That all being said, panels are the closest interaction with a celebrity guest one can have at Phoenix Comicon without shelling out an exorbitant amount of cash first. Friday morning brought about the first panel that I would attend in the North Ballroom as actor Manu Bennett, best known for his roles in “Spartacus,” “Arrow,” and The Hobbit: An Unexpected Journey, took the stage. Experience has taught me that actors who portray intimidating characters on-screen are often the kindest off-screen, and Bennett was a glaring example. After a woman told him he was the gentlest person she has ever met, Bennet proceeded to jump down from the stage and embrace her with a hug. His stories of how he got his “Arrow” role by putting a very real choke hold on a fellow actor or the amount of thought he put into how his character Azog (in The Hobbit) would interact with his Warg were filled with big laughs. But easily the highlight of the panel was the end when Bennett, asked if he could demonstrate a haka, a tribal dance from New Zealand, brought nearly two dozen audience members on stage to participate. And yes, it’s already on YouTube:

Saturday was absolutely stacked as far as celebrity panels were concerned, with many of the main draws to the event scheduled to appear. Kicking off the morning was a panel featuring “Batman ’66” stars Adam West, Burt Ward, and Julie Newmar, who received a well-deserved standing ovation from the capacity crowd. Obviously, the focus of the questions to the panelists was catered heavily toward their work on “Batman ’66” with West speaking the most on the role of the caped crusader. When asked if he would be interested in playing an older Bruce Wayne in a movie based on the “Batman Beyond” television show, West responded, “I would love to play Bruce Wayne again,” which erupted the crowd in applause. But the best moments of the panel came not from the actors on stage, but from the audience. One such moment was when a 42-year-old fan nearly brought the entire North Ballroom to tears with his tale of watching “Batman ’66” as a child and then growing up to join the Marines because that’s the closest he could get to becoming a hero like his idols. As the panel came to a close, a man was brought on stage to propose to his girlfriend (who joined him on stage with their baby boy in tow) in front of West, Ward, Newmar, and the thousands of onlookers in the audience. It was the perfect note to end on in a panel filled with such good feelings all-around.

Those good times kept on rolling right into John Barrowman’s panel, whose pre-show festivities included a dance contest and a game of “Marry, Kiss, Kill,” both of which were momentarily interrupted when Barrowman himself appeared on stage to participate. From there, the panel officially began in an anything goes capacity where nothing was off-limits, kids in the audience be damned. With his husband Scott watching from the front row, Barrowman proceeded to talk about everything from his work in “Doctor Who” and “Arrow” to the kind of underwear he prefers (Banana Republic briefs, for those wondering) to what house in Hogwarts he would be assigned (he’d create his own house–Gayffindor–and we’re all invited to join!). Also an accomplished singer, Barrowman serenaded the ballroom with a rendition of “You’re The Top” by Cole Porter and also spoke briefly about his latest album, which was entirely funded by his fans.

Bruce Campbell appeared next and began his panel in a most peculiar way:  hosting an Ash costume contest. Bringing several fans on stage dressed as Ash, Campbell proceeded to rundown and occasionally compliment each one, awarding $5 to the winner. His sarcasm continued into his next segment where he brought three audience members on stage to act as “panelists” and he proceeded to antagonize them all humorously. Not much information was had when the audience was finally able to ask questions as Campbell dismissed just about everything thrown at him with his biting cynicism. When asked about Evil Dead 4, he simply said, “Sure, why not?” but commented on how the films in the franchise made less and less money over time. He did, however, talk briefly about a new show he’s on for NBC titled “Mission Control,” which, given Campbell’s pedigree, could mean it’ll be cancelled immediately or last for six years.

When Stephen Amell took the stage next, he thanked everyone for “coming to the panel before Nathan Fillion’s panel.” Naturally, most of the Amell panel centered on “Arrow” and there was a lot of information shared that was of particular note for next season. Amell said that the Felicity/Oliver relationship will be touched on early in the season, and that we’re going to get a look at a new “superhero suit” in season 3 as well. One person asked about Deathstroke being a Batman villain and Amell responded cryptically with, “If you like Batman villains, wait until you see season 3.” Outside of the “Arrow” conversation, Amell spoke about co-owning his own winery (Nocking Points Wine) and how he would totally win “American Ninja Warrior” if he were on it. Having seen him up close and personal (via a photo op), I wouldn’t disagree.

Closing out the day was Nathan Fillion, arguably the biggest draw of the convention and certainly the funniest one to step into the Ballroom all weekend. After fielding his first question, Fillion looked around desperately for something to give out as a token of his gratitude, settling on forking over his beloved watch. It wasn’t until the third question that the crowd erupted in cheers as Fillion again looked for something to hand out and was miraculously wearing another watch, which he then tossed at the fan who had asked him a question. This joke carried through to the entire panel and the phrase, “Here, have a watch” became a hilarious punchline after each question was asked. Fillion did answer about the state of Doctor Horrible 2, stating that he knew the title and two songs but that director Joss Whedon was busy with something, but Fillion wasn’t sure with what (another joke). Anyone that braved the hectic crowd outside the Ballroom or had a marathon of panelists on Saturday was treated to a spectacular panel to close the show.

It’s worth mentioning that Phoenix Comicon had a plethora of non-celebrity panels that were absolutely worth attending, if not just to avoid the huge crowds in the North Ballroom 120 but to also listen to authors, professional cosplayers, and other experts debate worthwhile subjects of their own. One panel that I attended was “Magic Systems: Urban Fantasy vs Epic Fantasy” featuring authors Jaye Wells (Dirty Magic), Myke Cole (Shadow Ops series), Jim Butcher (The Dresden Files series), Sam Sykes (The Aeon’s Gate trilogy), Stephen Blackmoore (City of the Lost), Patrick Rothfuss (The Name of the Wind). Leaving the details aside for the sake of this article becoming like The Odyssey, there was a lot of interesting discussion on the writing process and how authors treat magic and fantasy both correctly and incorrectly. Once again, I would encourage anyone attending Phoenix Comicon 2015 to check out at least one panel off the beaten path. You might find a more interesting conversation there than with the 4000+ people in the North Ballroom.

In a World Turned Upside Down – A Bizarro Takeover