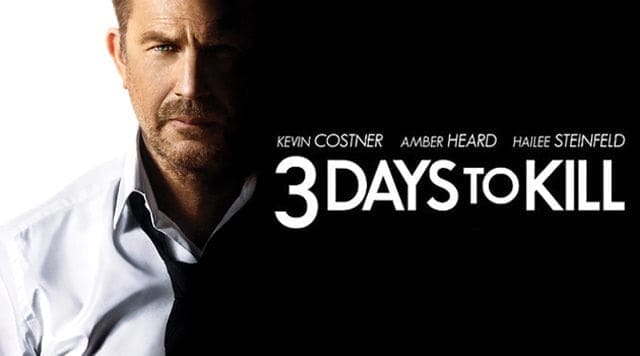 Don’t expect this to be a typical assassin thriller adventure. In 3 Days To Kill, director McG(Charlie’s Angels, This Means War) decided to play up the action scenes for laughs and in turn the whole movie rings comedy more than anything else.

The story is about a man named Ethan Renner(Kevin Costner) who is forced to retire from his work as a CIA agent after he is diagnosed with a terminal disease. Coincidentally this allows him to reacquaint himself with his wife and daughter after several years apart. His wife Christine played by Connie Nielsen(Law & Order: SVU, Rushmore) lives in Paris and is apprehensive of his sudden retirement from killing bad guys while his daughter Zoey played by Hailee Steinfeld(Ender’s Game, True Grit) is even less enthused about her father’s return.

Ethan attempts the many foibles of fatherhood, including intimidating boyfriends and bike lessons.  Yet we can’t forget that Ethan is a CIA agent so enter Amber Heard(The Rum Diary) playing the sexy operative named Vivi who brings him back into the fold for one last kill or maybe a dozen.  In return she promises Ethan an experimental drug that can cure him of his affliction.  So he reluctantly agrees of course because that is the premise we are forced to follow. Also the side effect of the drug is his heart rate slows down and he collapses so he must consume vodka(his choice) in order to prevent that.

A target known as the Albino is one of several people Ethan must attempt to find and kill.  You wonder sometimes when all the violence is going on why there is never a hint of police activity, but that would only slow down the plot.  Still Ethan manages to get the job done as best he can given his condition, only worsened by the side effects of his treatment. His collapses are even humorous since it happens right when he’s cornered someone important.  They play this scenario more than once until you can’t believe he never figured out he should have carried little bottles of vodka in his coat at all times.

The story was actually written by Luc Besson who directed Leon The Professional and The Fifth Element. His movies have a clever balance of serious situations mixed with humor.  This movie is funny from time to time, but it’s at the expense of the touching moments and what really detaches the audience from these moments is the editing which McG is known for.  Quick cuts that occur during sentimental dialogue which make it feel like you are watching a music video instead of a film.  It’s not the Pink Panther, but it’s not the Bourne Identity either.  Somewhere there’s a happy medium, but they failed to find it.

So ignoring the ludicrous plot devices, cliche characters, and their nicknames, you can have fun with this movie if you don’t expect it to be the serious action thriller it kind of tries to make fun of.  The family moments are pleasant enough and Kevin Costner does a good job being the serious guy who makes you laugh.  It’s just, perhaps, too unintentionally funny for it’s own good.

Synopsis: A dying Secret Service Agent trying to reconnect with his estranged daughter is offered an experimental drug that could save his life in exchange for one last assignment.