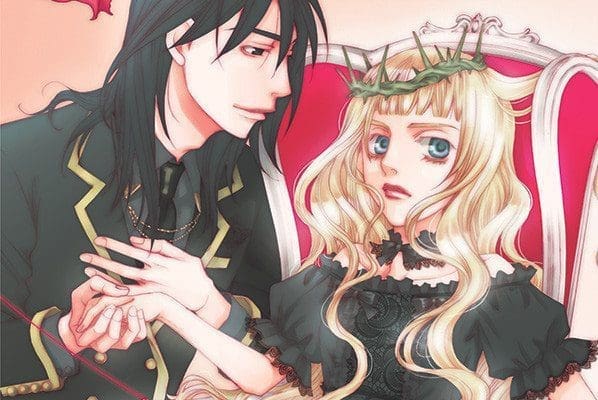 In New Series From VIZ Media’s Shojo Beat Imprint, A Celebrated Opera Singer Dies In A Tragic Accident, Returning As A Vampire With A Diabolical Mission To Spawn The Next Generation Of Undead

BLACK ROSE ALICE, Vol. 1 is now available in print from the Shojo Beat imprint and is rated ‘T+’ for Older Teens. Volumes each carry an MSRP of $9.99 U.S. / $12.99 CAN. Future installments of this continuing series will be released in English on a bi-monthly basis.

A digital version of BLACK ROSE ALICE, Vol. 1 is also available for $6.99 (USD/CAN) from VIZManga.com and through the VIZ MANGA App for the Apple iPad®, iPhone® and iPod® touch, Android-powered smart phones, as well as through the Nook, Kobo, Kindle, iBooks and GooglePlay stores.

In BLACK ROSE ALICE, Dimitri Lewandowski is a celebrated tenor in early 1900s Vienna. When he is killed in an accident, his corpse is colonized by the seeds of a vampire master. At first, Dimitri denies that anything has changed, but as the people around him start dying, he is forced to accept the ghastly truth.

“BLACK ROSE ALICE is a dark supernatural romance with a suspenseful storyline that puts its own unique twist on the vampire genre,” says Pancha Diaz, Editor. “After a prologue set in a beautifully rendered 1900s Vienna, the series flashes forward to modern Japan where Dimitri, who has become a fully developed vampire, appears in the dreams of a heartbroken woman to present a sinister proposal – he will save her fatally injured love, for a terrible price!”
Setona Mizushiro’s professional debut, Fuyu ga, Owarou Toshiteita (Winter Was Ending), won the 1993 Shogakukan Manga New Author Award. Her gender bending psychological thriller, After School Nightmare, was nominated for an Eisner Award and also recognized by YALSA as a Great Graphic Novel in 2007.