This year’s Con-Nichiwa surpassed previous years in attendance and even moved out of the hotel and into the Tucson Convention center. When I arrived on Friday morning at 8 am to set up, there was already a line out the door for badge purchases and pick ups. The vendor hall was packed and there was a variety of art, crafts, toys, figurines, and things that I am sorry to say, I have no idea what they were.  As usual there were tons of cosplays. For some, a kigurumi would do the trick. For some of you noobs out there a kigurumi is like a bil o’l pair of animal pajamas. Steampunk cosplays lurked around a bit and I even spotted Supergirl and Deadpool. AZHP was there running the video gaming as well as the tournament.

Just to take a quick step back for a moment, I usually won’t write about a show where I am a guest. I don’t want to show bias or use these articles as self promotion or convention promotion with the idea that I wouldn’t ever say anything bad due to conflict of interest. Now, I could tell you about the voice actor guests or the cosplay panels, or the gaming (tabletop and video) or I can dig a little deeper. I saw something at this show that I usually don’t see. There were quite a few handicapped attendees as well as staff. Don’t get me wrong. There is nothing wrong with having a disability. And that isn’t what this is about. It’s about how they were treated with the same consideration and respect that anyone else would be given. I recall in particular, a mentally handicapped young man attending panels, shopping, participating in activities, and showing his artwork to the pros. Not once was he stared at, murmured about, snubbed, ridiculed, or even patronized.  The same treatment went to the blinding otakus at Con-Nichiwa. I must say that it felt incredibly peaceful and safe inside the Tucson Convention Center last weekend. I wish that not only every convention, but rather everywhere could have the comradery and community of Con-Nichiwa. 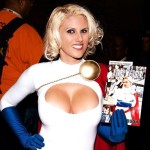