Las Vegas, NV – I’m no stranger to conventions and pop culture con. I have attended Amazing Arizona Comic Convention as a fan, done official photography for Phoenix Comicon, and presented at the South West Texas Pop Culture Con. This past weekend, I took a drive up to Las Vegas, NV to attend and shoot the inaugural Las Vegas Comic Expo held at the Riviera Hotel and Casino. This time around, I attended as a mishmash of things: I was a comic fan boy, was helping out with the Keyleaf Comic’s booth, and was photographically covering the event for Geek News Network. Being there under multiple hats enabled me to view the expo for what it was: an exposition of comic books and art. As a comic convention, the event had some issues, but as an exposition, they excelled and aptly named themselves.

In order to understand this, it’s important to look at the definition of each. A convention is a large assembly for discussion of and action on a common concern (in this case, comics, the creators, and the fans). An exposition, on the other hand, is a large-scale exhibition of art or manufactured products (in this case, a display of comics and goods for sale). While both revolve around people’s love of comics, books, and geek culture, Con’s are more a discussion and Expo’s are more a sales pitch. Neither is the  “correct” way of holding an event; depending on the circumstance both work well. Las Vegas Comic Expo billed themselves as an expo, and if the goal was to make money, they certainly delivered. First and foremost, there was no free schwag table that I saw. In its stead was a merch table, selling LVCE labeled goods (posters, playing cards, etc). This was a first noticeable difference to me from the other conferences I had been to, where the schwag table was a staple, with movie posters and other free goods lined up for the taking. This didn’t bother me, but it was something that I took note of while checking in for the weekend. Once inside, I made sure to check out artists alley, where the majority of the artists and creators were camped. Up and down the lanes, creators and artists were creating personal sketches, signing prints, and selling original pieces, story boards, and concept art. People were roaming the conference hall laden down with superhero mugs and paraphernalia, statuettes and action figures, while out front it was impossible to not find someone getting a nicotine fix by choking down a cigarette so he or she could run back inside to grab up signed books, rare printings, or a hard to find autograph. Many of the bigger creators got in on the sales aspect as well, running convention specific specials, such as limited edition prints of their signature character (ie, Lady Death with a Las Vegas background) or deals on their books (Keyleaf Comics had a special bundle available). Almost every vendor, artist, and creator that I spoke with made their money back on their booth, plus some, and were already planning on grabbing up a spot again at next years convention. The big creators weren’t the only ones who were making out well though, and while the big names and convention regulars in the room (Fialkov, Brooks, Debalfo, Mignola, Pulido, Altstaetter. etc.) looked to be doing very well, the “little guys” were selling like hot cakes as well. It wasn’t uncommon to hear those in attendance talking about which of the new or first time vendors were worth checking out and talking to. Living in Phoenix, it was especially nice to see Arizona locals Shelby Robertson and Alfred Trujillo having plenty of people stopping by their booths. All in all, products were sold, money was made. No complaints at all in this regard.

Many people though, familiar with Emerald City, Phoenix Comicon, and the mother of all cons San Diego Comic-Con, were expecting more of a full immersion fan experience, replete with panels, discussions, contests, celebrity signings, etc.. While these were all present, their inclusion seemed to be last-minute and poorly executed. This is most possibly due to the forced change of venue two weeks ago, which enabled actual space for panels.

The panels that I sat in on were fairly well attended, with about 10 people or so in each (not counting the panelists), but the amount of empty chairs in the rooms greatly outnumbered the amount of bodies present. This could have been fixed, I think, with more frequent and better announcements of the panels, including their times, what rooms, and where the rooms themselves were located. None of the rooms had time cards outside of them stating the names of the panels or when they were, so this made finding the correct place fairly difficult. More than once I found myself wandering from room to room looking for the correct one. Had there been better signage, I fully believe that they would have been better attended. After I was in the room however, the panels were great. I sat in on the digital comics workshop (paneled by creators at Keyleaf Comics, who have hybrid digital/print business model) and the indie creator workshop. The panelists in both all knew their topics like the back of their hands and were able to roll with spitfire questions with relative ease, and were willing to let themselves get slightly sidetracked for the benefit of more in-depth conversation (this is much more difficult than it seems).

While there were celebrity signings (Tricia Helfer and Thomas Jane were the heavy weights this weekend), it was interesting to witness the near apathy towards them. Wandering the hall with one of my buddies, we witnessed Tricia Helfer sitting at her booth, all by herself, with no fans anywhere near her. Over the course of the weekend, this was the case about 75% of the time. Just sitting there, staring out at the crowds wandering around and hitting all of the booths except hers. This could have been due to a few factors, as LVCE placed her in a corner of the convention hallway completely away from the flow of the other booths and guests. There was very little foot traffic going past her set up. The other could have been the fact that she had multiple “No Photos” signs plastered around the booth. Instead, you could take a professional photo with her for money. All of the others boothing were posing for free, which seemed to be a much better idea based on booth traffic alone. Thomas Jane, on the other hand, could be seen wandering around the hall, checking out booths, artists, goods, etc.,  He made himself available, and as such reaped the benefits. Still, it seemed as if there was a general disregard to his signing times as well. I was in the convention all day Saturday and Sunday, and remember hearing only one announcement about his signing times.

Topping off the weekend the Cosplay Contest. This was possibly the best run aspect of the “Comicon” styled events. About 30 or so guests, some professional and some amateur, traipsed across a stage, strutting characters, creations, and needle and thread skills for viewing pleasure of those in attendance (again, those who were able to find the room, which was the furthest away from the convention hall with very little signage). As a photographer, I managed to pull a great seat front and center, and was really excited to see that those running the contest had put up a makeshift photobooth, complete with light kit, photographer, and assistant holding reflector. Each contestant ended their walk with a professionally posed photo (an idea I fully plan on bringing with me to the next comic convention I work). The costumes ranged from makeshift to incredible, with Batman cosplays dominating the event, with the obligatory Captain Jack Sparrow and the Incredible Hulk rounding it out. Bane, Joker were my two of my favorites, and Harley Quinn (Phoenix’s own Rosanna Rocha-Robertson) stole the show, bringing home the Jury’s Prize. I can honestly say that I was very happy with the cosplay scene, both in the contest and throughout the weekend itself.

While there were some things that I wish were run a little bit tighter at Las Vegas Comic Expo, it was overall a fun event. Being moved to the Riviera Hotel gave them the extra room they needed, and they still have the ability to stay there for another year or two. While mainly an event for collectors, it offered enough “comicon” experiences to satiate the masses and convince me it is worth checking out again next year.

Check out my photos from the event: 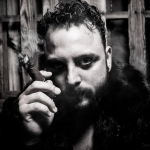 The Jack-of-all-trades, caffeine fiend, and wearer of many hats (figuratively and literally). Photographer, writer, educator, fedora, driver, trilby’s. My photography teeth were cut in the live entertainment industry, shooting concerts, live events, and conventions. I came to photography for an additional creative outlet to supplement my writings and as a side gig to my college teaching position, and I’ve now been shooting for the better part of a decade. Music and concert photography are my biggest passions, though I had to learn the harsh lesson that head banging and holding a camera steady don’t readily mix. A literature geek first and foremost, I read the entire Lord of the Rings series in 3rd grade, began a lifelong love affair with the Star Wars extended universe shortly after, and wrote my MA Lit thesis on Neil Gaiman. When not shooting or editing, you’ll find me incorporating Star Trek into lesson plans, playing some iteration of Zelda on any one of my Nintendo System, geeking out about indie comics over a very large iced coffee, or simply writing. Follow me on twitter at @MrAnathema, or contact me directly for whatever your photography needs are at jmabbrusc@gmail.com or facebook.com/mranathemaphotography