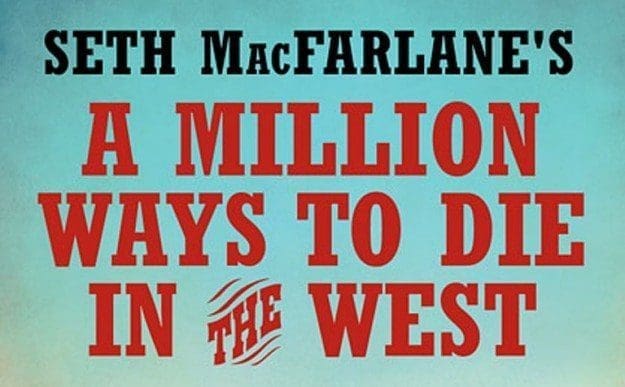 When you watch a Seth MacFarlane movie, you can expect a few things such as toilet humor, profanity, and random jokes to catch you off guard.  You can also get a touching homage to nostalgia which in this case is paid to the old westerns of the 1950’s.  On this occasion I would have preferred more western storytelling and less random humor.

In the film A Million Ways to Die in the west, Seth MacFarlane, his second directed theatrical film, plays a sheep herder named Albert.  He is recently dumped by his girlfriend Louise(Amanda Seyfried) and begins to reminisce on what a horrible place the old west is with his friend Edward(Giovanni Ribisi) and Edward’s prostitute girlfriend Ruth(Sarah Silverman).  Albert finds distraction in the sudden arrival of Anna(Charlize Theron); who can not only shoot a gun, but sees something in Albert that he never knew existed.

Albert still struggles with losing Louise. Especially when he sees who she decides to date now.  A man named Foy(Neil Patrick Harris), the local owner of the town’s Moustachery.  Albert has to contend with the verbal lashings of this man and also the bandit Clinch(Liam Neeson).  An outlaw that is expected to make trouble for the town and Albert specifically.

Charlize Theron is a real highlight in this movie as Albert’s girlfriend.  She elevates her character and makes you care for both Albert and her rather quickly.  Liam Neeson is also a pleasure to have as the villain dressed in standard black attire.  There are other cameos spread throughout this film and some don’t even have lines so see if you can catch them.  Sarah Silverman makes a great prostitute with all the appropriate dirty humor you can expect in that profession.  I wasn’t completely sold on Seth’s character cause he seems to be playing a 21st century cowboy and it didn’t always mesh with the 19th century atmosphere.  What Seth does bring to his role is heart and you do stay with him if only because the rest of the town is kind of stupid and doesn’t warrant your attention.

One of the biggest treats in this comedy is the cinematography.  Something a comedy is usually not known for, but, as I stated before, Seth MacFarlane loves to pay homage and the sweeping desert scenes of Arizona are more beautiful than any of the films I’ve seen lately.

Overall the jokes are funny to a point, but several are made one too many times.  The scenes in the saloon and with the Indian tribe, note there are racist jokes since this is 1882, are pretty hilarious.  The humor doesn’t shy away from low brow very often, if at all, so you have to let your brain go along for the ride.

You could make the comparison to Blazing Saddles, but it’s a different take on the Old West.  A modern day style, profane-laden, western with Farrelly brothers humor.  If anything the music and the background made me want to enjoy the western part of this movie more than the main story of Albert’s issues with self-confidence and his love for Anna.

If I was to put this film up against Seth MacFarlane’s previous movie Ted, which I loved, I would say he is a good director, but as an actor it’s not the best fit for him.  The movie feels like a collection of sketches which is not a good thing.  I would recommend this movie if you still have a passion for Family Guy and also enjoy John Wayne movies.  Although this movie will make you wish you were just watching a John Wayne movie.

A Million Ways to Die in the West:[usr 3]

About: A Million Ways to Die in the West

Synopsis:As a cowardly farmer begins to fall for the mysterious new woman in town, he must put his new-found courage to the test when her husband, a notorious gun-slinger, announces his arrival.

The Mega Men Podcast #54: The Fish Men of Europa