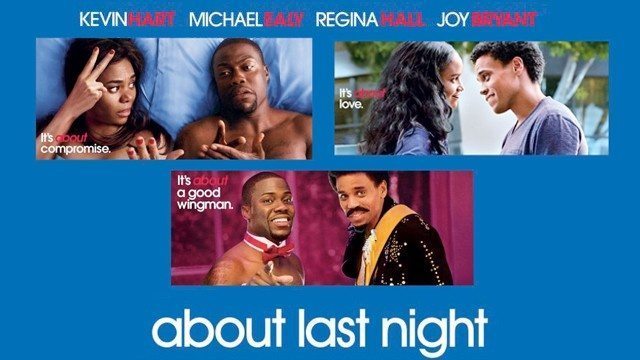 While many of the audiences who will consider watching About Last Night may believe it’s an original story, that isn’t the case at all. The movie originated as a play entitled Sexual Perversity in Chicago, and made the transition to the big screen back in 1986 with Rob Lowe and Demi Moore. However, this remake certainly takes things in a slightly different direction.

The script hits the same major beats as the 1986 original, but what’s different here, aside from the nearly 30-years of social change, is the casting of Kevin Hart as Bernie Litko. Hart seems to take the lead in almost every movie he’s been in over the last few years, and About Last Night is no exception. His scenes with Joan (Regina Hall) are the highlight of the movie, and the only thing people will be talking about as they leave the theater.

Despite Hart’s strong performance, it’s hard to look at About Last Night as anything other than your typical romantic comedy. It doesn’t bring anything new to the table, and even pales in comparison to Hart’s previous romantic comedy effort, Think Like A Man. The primary difference is that Hart had a solid script and supporting cast to bring Think Like a Man to new heights, something that’s lacking in About Last Night.

It isn’t so much that the relationship between Danny (Michael Ealy) and Debbie (Joy Bryant) doesn’t spark with audiences as much as it sparks on-screen, it’s simply that the script isn’t anything spectacular. This makes the delivery of each line far more important than what’s actually being said, and that’s how Hart makes this movie manageable. In Think Like A Man, Hart’s supporting cast was almost identical to the cast in About Last Night, but the script, coupled with Hart’s trademark delivery made all the difference.

The movie attempts to reel in audiences by raising the bar when it comes to the raunchiness and sexual perversion of the characters. While that will appease most people, it still doesn’t offer anything new in the romantic comedy genre. Kevin Hart is still acting like Kevin Hart, which is likely what Sony Pictures and Screen Gems were hoping for. Regina Hall offers a solid helping hand, but Ealy and Bryant just can’t seem to keep up with the other couple.

Things start off strong in the beginning of the movie, but a bit of slow pacing in the middle and some moderate disbelief at the speed at which the relationships advance prevents the movie from really capturing the audience. It’s not a terrible effort by any means, and if you’re a Kevin Hart fan it should be right up your alley, but if you’re looking for something new and inventive this Valentine’s Day, you won’t find it with About Last Night.

Synopsis: Follow two couples as they journey from the bar to the bedroom and are eventually put to the test in the real world.