Geek News Network
Home Voices Comedy Air New Zealand Takes You Back to Middle Earth, Before You Even... 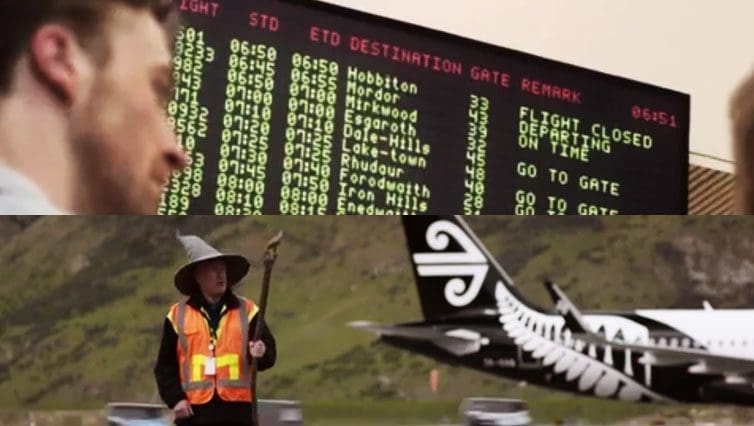 Air New Zealand is known for its sense of humor – from having Richard Simmons shake his tush down the aisle to its own airline staff bearing all for a safety briefing. So, it’s no surprise that they’re celebrating ‘The Hobbit: The Desolation of Smaug’ and returning to what they know best with another viral video that brings magic back to the airline with “Just another day in Middle-earth.”

If you think that Kiwis (New Zealanders) are sick of the Tolkein movie ‘verse, you’re mistaken. From The Green Dragon pub providing visitors with actual Hobbit ale at the Hobbiton set in Matamata, to another statue joining the (enormous!) suspended Gollum sculpture that stalks fish above travelers in the Wellington Airport, one thing is clear – this nation has every reason to be proud of remaining a world-class destination for fantasy geeks worldwide.

As always, the video stars actual Air New Zealand flight attendants, pilots, aircraft engineers and more. Along with them are Kiwi Dean O’Gorman aka Fili, and the voice of Sylvester McCoy, the Whoovian-verse actor who starred in ‘The Hobbit’ as Radagast the Brown.

The running joke in New Zealand is that one out of every four people you meet on the islands has worked on a ‘Lord of the Rings’ or ‘Hobbit’ film, and the (over hundred!) extras you see in the set only add to this number.

The video also helps promotes the announcement of a chance to win a trip to the film premiere with stars like Evangeline Lilly, Martin Freeman, and Director Peter Jackson. There is a shot to grab one of four trips to either Middle-earth or to the premiere in Los Angeles.

Of course, this includes airfares, accommodation and rental car – giving the promotion winners a chance to check out the movie sites.

Disclaimer: The author has traveled to New Zealand, splurged on the Lord of the Ring tours and sites, and is happy to send you many Hobbit-sy travel tips should you need them!

Not Just Another Day at The Office: An Interview with Kate...