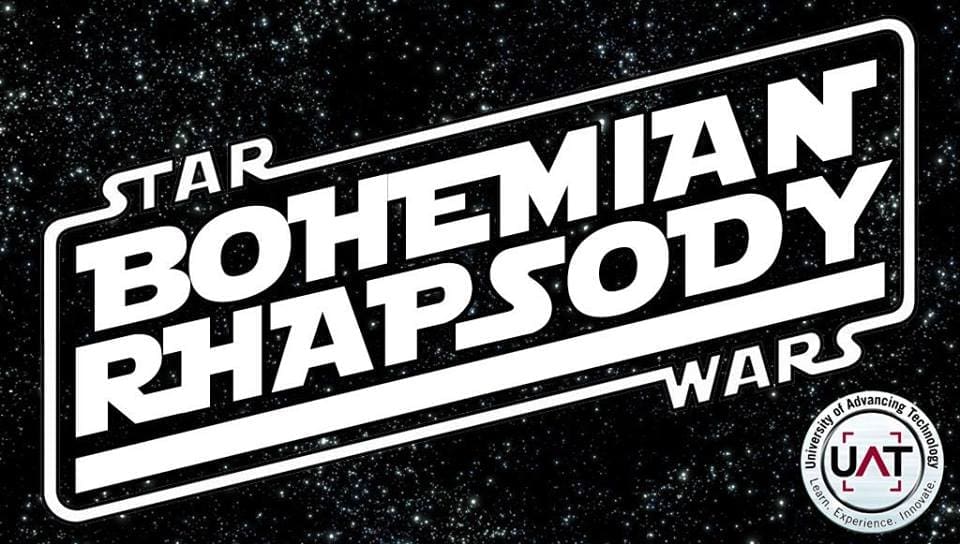 UAT Digital Video (University of Advancing Technology) has brought students and cosplayers together to give fans a geeky take on Queen’s “Bohemian Rhapsody,” the Star Wars edition.

Working in Tempe, AZ, Digital Video Professor Paul DeNigris and his students had only recently graced Machinima’s YouTube channel with another fan project, “Red Sand: a Mass Effect fan film,” and were in the middle of a Borderlands fan film when a new idea struck Paul in class and lingered on his ride home. It flourished when he was in the middle of singing to himself during his classic rock playlist.

After Wayne’s World how does anyone NOT sing along to that in their car? -Paul DeNigris

It didn’t take long for the diehard geek and longtime Star Wars fan to rewrite “thunderbolts and lightning” into “Force chokes and lightning” – and the idea of rewriting the classic Freddie Mercury lyrics to fit the Star Wars universe was born.

Students Stephen Panagiotis and Jamall Richards jumped on the idea and immediately set about reworking every line of the song with DeNigris’ guidance and input. Mercury’s operatic and often nonsensical lyrics gave way to a musical retelling of key moments from the Star Wars saga, from not only the Original Trilogy but also the Prequel Trilogy and the Expanded Universe of novels and videogames.

With the lyrics done, DeNigris reached out to his network of Arizona talent and found singer Adam Newton and music producer Joey Sawhill to execute the new version of the song. Newton was able to hit Freddie Mercury’s original vocal register and to duplicate his phrasing of the song. The result is a new version of the old classic that sounds like Queen themselves could have recorded it.

To produce the video, DeNigris and student producer Panagiotis reached out to the Arizona geek community – specifically to the various Star Wars costumer groups such as the 501st Legion Dune Sea Garrison, the Rebel Legion Mos Eisley Base, and the Mandalorian Mercs Shonare Vhekadla Clan. Over several weekends, members of these groups converged on UAT’s Greenscreen Studio with their costumes – Mandalorian Bounty Hunters, Imperial Stormtroopers, Droids, Jedi, Darth Vader, Obi-Wan Kenobi, Starkiller and more. A group called “The Cantina Banned” showed up dressed as the alien musicians from Star Wars: A New Hope. A puppetmaker and costumer in Tokyo, Japan, volunteered his Yoda puppet and his “Ewan McGregor” Obi-Wan to participate in the video, sending the UAT crew his footage via the Internet.

With so many talented costumers lip-synching to the new lyrics, student editor Natasha Stringam found it challenging to assemble the video.

Everyone did such a great job singing and there were so many funny moments in each person’s performance that it was sometimes hard to decide which parts to put in and which to leave out. -Natasha Stringam

In the end, Stringam finalized the cut and turned the video over to the visual effects team, who added backgrounds and other elements to put the characters into the Star Wars universe. The result is a comedic homage to George Lucas’ space opera as well as to the operatic rock of Freddie Mercury and Queen.

Did you have any personal favorite moments or surprises while making this?
My favorite moment had to be when two Stormtrooper costumers, Ben [Dickinson] and Trey [Moore], showed up with cheesy 70’s shag wigs and a whole routine they had rehearsed as Luke and Han while they were running around the Death Star in ‘Trooper gear. Their performance is one of the funniest in the video, and the fact that they had invested time and energy into rehearsing was mind-blowing. Second favorite – dressing up as Vader and getting in front of the camera for a change.

If you could sit down and watch this with a cast or crew member of the Star Wars film-verse, who would it be?
Well that’s a tough one! My first inclination is Frank Oz, and I would ask him to only talk to me in the Yoda voice.

This project was amazing! What else are you guys working on?
“Change of Hart,” our Borderlands fan-film, and a webseries about crime-fighting cosplayers called “Zero Complex,” which will be launching its Kickstarter in the Spring.