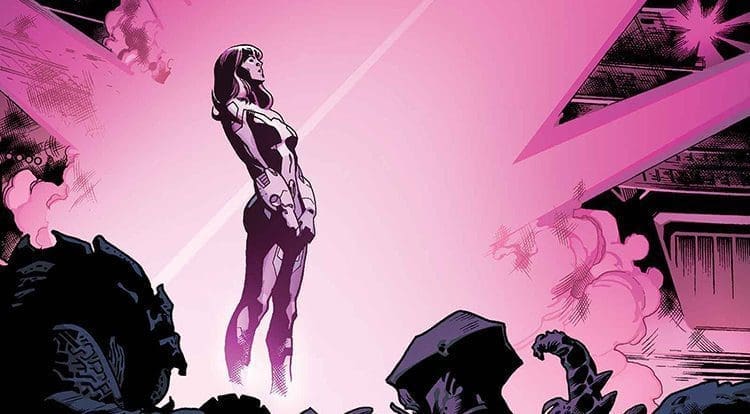 All-New X-Men #23 is the third chapter in the “Trial of Jean Grey” crossover event with Guardians of the Galaxy but is actually the first time the two teams are interacting and the results, as expected, make for a truly great read. Writer Brian Michael Bendis is able to cull a lot of humor from the convergence of these two teams and their inquisitive interactions where neither side knows what exactly to make of the other. Since Bendis is the regular writer on both series, even the visiting Guardians of the Galaxy characters retain their developed voices from that book, so expect a fair amount of foul-mouthed snark from Rocket Raccoon on top of all the other proceedings. Additionally, Bendis somehow finds room between managing an astounding twelve characters to further develop the Young Jean/Young Scott dynamic while also moving ahead on the titular trial of the crossover itself.

At first, the meeting between the All-New X-Men and the Guardians of the Galaxy is a bit lost to the din of Bendis’ reliance on an overwhelming amount of dialogue bubbles, so it gets a little difficult to tell who’s making which witty comment. But when the conversations get honed in on as the issue progresses, the true wealth of humorous dialogue becomes apparent and appreciated. Young Ice Man’s continued insistence on talking to Rocket Raccoon because it makes him “feel like a Disney princess” is easily the best exchange of the issue, though Young Beast’s fascination with how the Guardians’ advanced technology works draws an equally big smile. Once the issue moves away from the high jinks of a man-made of ice talking to a gun-toting raccoon (who’s not actually a raccoon, apparently), it steps into a more somber scene of Young Jean facing her Shi’ar accusers, though it’s still unclear how Jean can be tried for crimes she has not committed yet nor has any recollection of ever committing. As of right now, the titular trial is still a weak link compared to the very strong character moments happening outside of it.

Another contribution to the superb character interactions is Stuart Immonen’s art, which fits just as well on the Guardians of the Galaxy as it does on the X-Men. Just as the voices of each character are retained so too are their visual appearance, meaning there’s never a moment spent trying to figure who is who in some of the more loaded panels. Of course, the character designs take a backseat to the action sequences where Immonen truly shines as expected. I would gladly look at an entire comic of just spaceships battling one another if Immonen was the artist. Thankfully, All-New X-Men #23 has its share of both fantastic artwork and extraordinary banter between characters, further propelling this crossover beyond expectation.

Surprise, surprise, an issue featuring two teams as well written as the All-New X-Men and the Guardians of the Galaxy is fantastic. Although the actual trial that predicates this whole crossover event remains a questionable plot device, the character interactions showcased in All-New X-Men #23 are a big reason to pick this issue up.