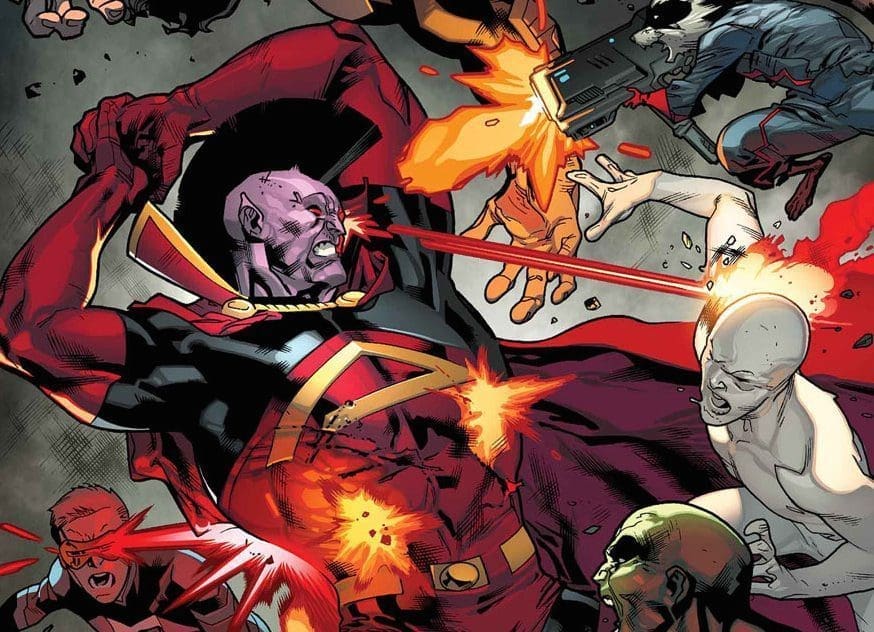 As the Trial of Jean Grey begins to wind down in the pages of All-New X-Men #24, the biggest enjoyment of this crossover event so far has definitely been the interactions between the various team members of both the X-Men and the Guardians of the Galaxy. For the better part of this event, the two teams have been cooped up in what has to be one serious cramped spaceship, with over dozen mutants and other worldly creatures occupying the same space and making snarky remarks to one another, and it’s been a lot of fun. Less captivating has been Young Jean’s trial, which unfolds within this issue and is still as one-sided as it was when it started. There appears to be no discernible reason for Jean to be on trial and with only one issue left in this event, I can’t imagine the tides turning.

What’s strange is that it seems writer Brian Michael Bendis is even aware how ridiculous the trial is, using Star Lord’s not-to-be-trusted father, J-Son, to crash the proceedings and declare as much. Young Jean’s primarily accuser, the Gladiator, is revealed to be as guilty of committing murder as Jean herself, so there’s really been no attempt made to at least play devil’s advocate on Bendis’ part. Trial aside, it is Young Jean’s rescue party–made up of X-Men, Guardians of the Galaxy members, and now the Starjammers (best name for a group ever?)–that pushes this issue beyond its more average proceedings. Ironically, All-New X-Men #24 contains a cavalcade of fantastic moments involving the Guardians, including a plan that involves Angela traveling to a Shi’ar ship and causing the kind of mayhem she excels at. It’s the kind of great showcase for the team I was lacking in the last Guardians of the Galaxy issue, and I hope that people not normally reading that book will be willing to give it a shot when this team-up ends.

Being that this is a far more action-packed issue than previous ones, Stuart Immonen is able to showcase his talents in a lot of large-scale set pieces. Such a set piece exists in the very first splash page, a shot of Young Jean’s trial that looks less like an intimate courtroom and more like an indoor intergalactic rock concert. It’s the kind of two-page spread that Immonen excels at and it allows All-New X-Men #24 to feel like an even grander narrative as a result. When it comes time for the battle between the Shi’ar and our cluster of heroes, Immonen keeps the action to smaller panels but still retains the more impressive moments, like when Gladiator takes down Drax, Angela, and Groot at the same time. Having Immonen draw the Guardians of the Galaxy for this short time has been a visual treat as this is an artist that truly belongs in the sprawling landscape of outer space.

All-New X-Men #24 can’t make a case for the existence of the actual Trial of Jean Grey, but it does give us a lot more character interactions between two disparate teams of heroes with more hilarious results. If you’ve been enjoying the banter between Rocket Raccoon, Groot, and Young Ice Man, picking up this issue would be an advisable choice.