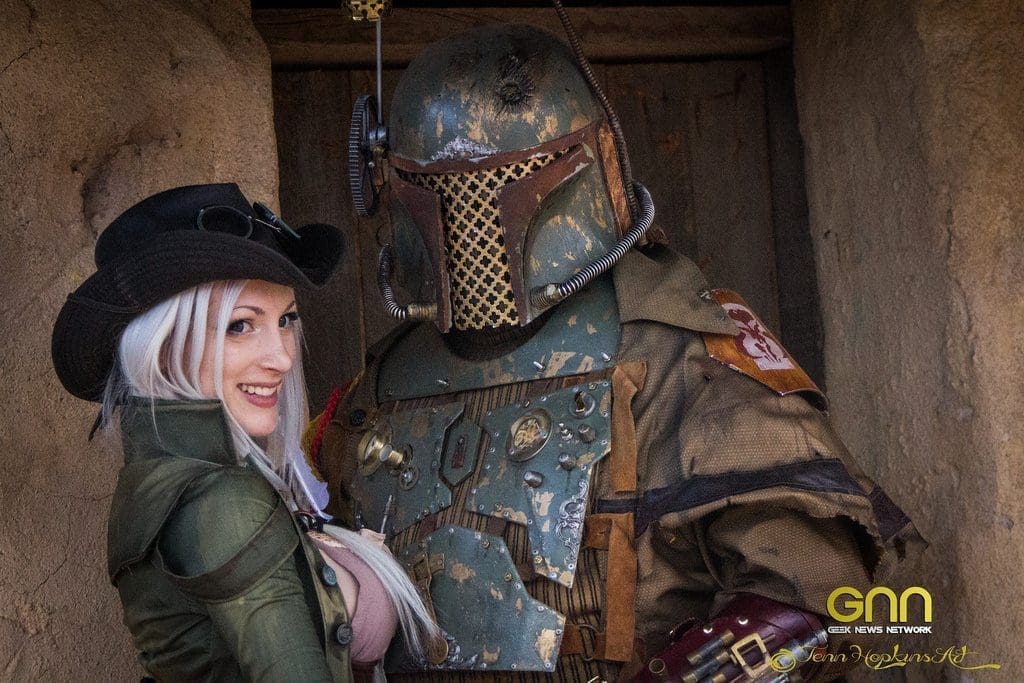 Steampunks from all over the country poured into Old Tucson last week to participate in the Wild Wild West Steampunk Convention’s third incarnation. Blending the real life, interactive experience of a renaissance festival with the concentrated fan presence of a comicon, the Wild Wild West Steampunk Convention is still one of the most intimate and friendly conventions that I have ever attended. For example, Michelle of Damsel in this Dress recognized me at another vendor’s booth for the alteration that she had done on my (lovely, comfortable, flattering) corset…nearly two years ago! Still, exchanges such as: “That looks great-how did you do that?” and “Do those gears work?” aren’t limited to those that you know in the Steampunk community; it’s not hard to strike up a conversation when talking clothes and weaponry. At the Wild Wild West Steampunk Convention, there is a place for every age and level of involvement—one of my favorite things this year was seeing an abundance of children and young families participating in the convention…especially the steambabies in slings! Indeed, the two little girls from the Steampunk Family who were “sold” for 100 rupees during the Costume Contest definitely stole the show. The Wild Wild West Steampunk Convention is certainly a place to see and be seen, so definitely look forward to the gallery of pictures we’ll be posting here soon!

While Friday night’s entertainment was certainly fun, there wasn’t much dancing at the Steampunk Ball. There were a few couples who took the floor when the waltzes played, but for the most part, attendees waited for the entertainment to start and only really danced to the upbeat songs between the later sets. Osiris Belly Dance returned, and I particularly enjoyed the mermaid/pirate piece in keeping with this year’s Land Vs. Sea theme. Dyno Staats invited the audience to “come watch, something might go horribly wrong!” and though nothing did…for long…I enjoyed his brand of mad science magic. I loved listening to the Nathaniel Johnstone Band. Their music is solid and hard-hitting, with a haunting, worldly vibe that evokes wanderlust and adventure. Johnstone left Abney Park in 2011 and while I can clearly see where the aesthetic is related, I think that the Nathaniel Johnstone band has a cleaner sound.

I spent my Saturday morning attending back to back panels out in the Chapel. First up was “Steampunk in Comics” with Brian Kesinger (Disney artist also known for Tea Girls, Otto and Victoria, etc), and Eric Burton (make up and special effects artist currently working on the TV show Revolution). While both were inspired by the X-men growing up, Burton’s current aesthetic clearly leans more towards horror (he’s working on creating a Steampunk Haunted House) while Kesinger is drawn to the romantic, fantasy side of Steampunk. I was fascinated by Brian Kesinger’s story (he was hired by Disney right out of high school) and recommend that you take a peek at his future projects (such as this indegogo campaign).

The next panel was “Social Media: Virtually and Socially Steampunk” with Kato, Steampunk Boba Fett (John Strangeway), and Alan Falconer. As I’ve said in the past, any panel with John is worth attending, (I’m still bummed that I missed the screening/commentary panel on his new short film “Trial of the Mask”) and this one was no exception. Kato emphasized how important it is to use humor and audience awareness in providing content, and all panelists agreed about the vitality of good photography: “No matter how good it looks in person, you’ll never get far online without a professional looking picture.”

Saturday night was a blast, starting out with one of my favorite bands, The Cog is Dead. Due to a scheduling miscommunication their performance was cut short, but in a later interview lead singer John “Sprocket” Mondelli said, “this is a great venue and one of the best audiences we’ve played for…we’d love to do a full set if we’re invited back.” Best experienced live, Steam Powered Giraffe certainly did not disappoint! I particularly liked how the Walter Girls are being incorporated into the act. I’ve seen Steam Powered Giraffe perform at all three Wild Wild West Conventions, and it has been very interesting to see their fanbase grow…especially the vocal group of fangirls who were screaming for more Michael Reed! Professor Elemental donned his Fighting Trousers and topped off the night, finally getting a sitting audience to their feet with his special blend of chap hop.

On Sunday I attended one of my favorite panels of the convention: “Making BIG Props” with John Floyd and Mike Syfritt. Maybe next year they’ll do a panel on glues; most of the time was spent discussing the merits and pitfalls of various adhesive materials. “It’s trial and error, all the time,” explains Syfrit, who teaches classes at the Tech Shop in Chandler.  Though it was a very brief introduction to many of these techniques and products, I left this panel inspired to go out and make–and share!–new Steampunk creations.

I first learned about Tea Dueling last year, and I knew ever since that a Wild Wild West Steampunk Convention would never be complete without witnessing the biscuit sodden spectacle. While it is true that the sport is indeed honorable (“Such honor in this room! I can feeeel the honor between these two men!”) it is the antics of Jocelyn “Madam Askew” Weathers, The Grand Arbiter Glen Shambach, and Jenn “Hawkeye” Lopez of the Tucson Steampunk Society that made the Tea Dueling Finals such a hilarious event.

During the wrap up and reflection, the Oddland Traveling Carnival announced that they managed to raise several hundred dollars and donate left over carnival prizes to the Kids Need to Read charity–despite having their tent travel away from them in the winds on Saturday night. This just demonstrates the resilience and perseverance of the Steampunk spirit. As Brian Kesinger said, “It’s a genre that encourages any of us to become content creators,” and all across the Old Tucson park this weekend, convention goers got to see and display the creativity that defines this fandom.

The Wild Wild West Steampunk Convention is clearly growing in exciting directions. With the addition of convention ribbons and the Land Vs. Sea theme, it’s clear that organizers are trying to create an even more interactive experience. This year there was an attractive array of vendors and entertainment options, and the selection of panels was diverse and interesting. Though this year has barely ended, I am already impatiently looking forward to next year’s Wild Wild West Steampunk Convention!