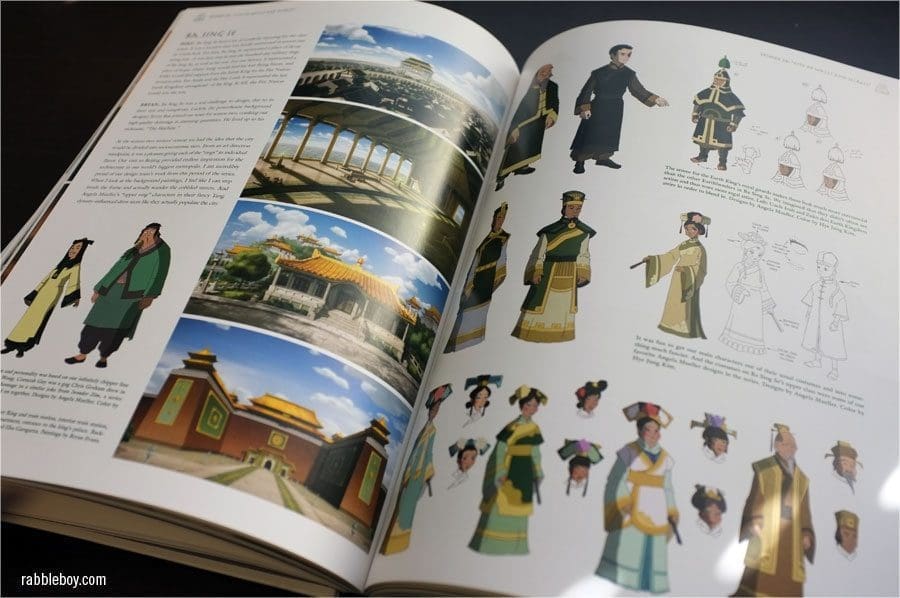 When I walked past the Dark Horse table at Phoenix Comic Con, I literally SQUEALED in excitement at Avatar: the Last Airbender Art (The Art of the Animated Series).  This book covers all three seasons of the animated series, and is put together with the love and dedication to detail and artistic integrity as the actual series. More than showcase the art, this book tells the story of this show: how it was conceived and evolved and became the beloved series that it is today.  I have been looking for this book for four years, and it certainly did not disappoint!

The first chapter tells the story of Avatar: The Last Airbender’s early development and is easily one of the most fascinating sections of the book.  In their own words, Michael DiMartino and Bryan Konietzko describe their partnership and the creative process of building the Avatar universe.  From the beginning, you can see how the creators “longed to make something with heart and integrity.” I particularly enjoy how they tell and show the evolution of the story through character sketches and abandoned story ideas. In some early drawings, Aang’s glider was more of a techno-staff, and details from that first futuristic image linger in later drawings until it becomes the recognizable prop from the finished product. On the Appa page, I loved the “quiet moment” concept art, and the detail about the saddle being held on by loops of braided fur was something I hadn’t paid close attention to before.

The hybrid animals were some of my favorite features of Avatar (especially the turtleducks!) and you could really tell in their spotlight section that the animators had a great time going wild with creating them.  In addition, Michael and Bryan really wanted to create a partnership with the Korean animation studio, and gave creative license to the animators to develop minor characters such as the villagers and street urchins. Some of the characters that came out of this artistic collaboration were Ryu Ki Kyun’s (animator at JM Animation) designs for Sneers, Longshot, Pipsqueak, the Duke, and Smellerbee.

From the eerily lit halls of Ba Sing Se to the ornate throne room of the Fire Nation, the backgrounds really get a chance to shine in this book. It is full of the vast cityscapes, craggy rock valleys, and exquisite natural landscapes that flesh out this world. Lush and detailed, the setting of Avatar was a character in and of itself, and it’s truly lovely to be able to explore some of these locations more closely.  It was also really neat to be able to compare and contrast the inspiration photographs from travels in Korea and China with the final rendered images.

“We began our animation career as storyboard artists, and love that part of the animation process. We were usually busy overseeing production, but once in a while, if there as a particular sequence that was really important to us, such as the introduction of Toph’s character, we’d somehow find the time to draw it.” This quote is nestled under Bryan Koniezko’s storyboard of the first appearance of the Blind Bandit on page 99.  I remember Aang’s slow motion, awed face pan across the screen in that episode as an artistically stylish piece of animation, and was intrigued to learn that Bryan storyboarded that sequence himself. The expressions are a perfect match. Of course, this storyboard features the Boulder, who is my second favorite minor character in the Avatar universe.  Don’t worry, the Cabbage Merchant also shows up a couple of times!  Throughout the book, readers get to see many storyboard, pencil tests, and character development sketches that really show the behind-the-scenes process of animation.

There are many appealing things about Avatar: The Last Airbender including sophisticated storytelling, compelling, complex characters, and a fascinating and well-developed universe inspired by many cultures.  The artwork, however, is really what tips this show over the edge.  From start to finish, the commitment to quality and integrity really shines through in this masterpiece of animation.  I very much enjoyed this art book and highly recommend Avatar: The Last Airbender (The Art of the Animated Series).  I am so excited to finally have this book on my shelf and will be returning to it many times in the future.

Sweet. One of the best finales to any tv shows.

Lol…I will get a towel for you