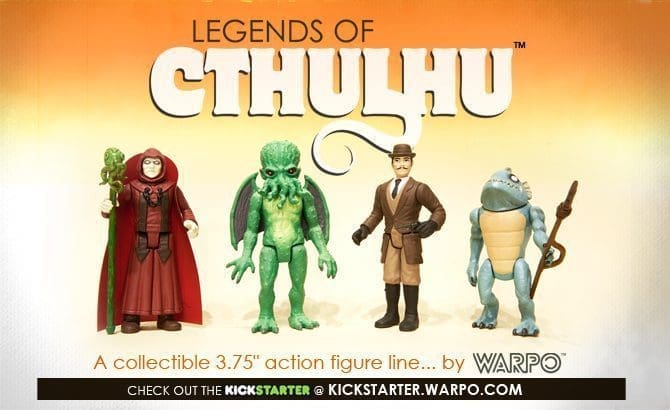 Artisan Retro Toys from Legendary Artists and Sculptors Make Kickstarter Debut
Warpo, creator of artisan retro toys, is thrilled to announce today the launch of its Kickstarter to fund Legends of Cthulhu, the first retro-styled action figure line based on the characters of H.P. Lovecraft.
By enlisting legendary sculptor Eddy Mosqueda (Teenage Mutant Ninja Turtles, Masters of the Universe) and artist Ken Kelly (Micronauts, Manglor Mountain, KISS’ Destroyer album cover), Legends of Cthulhu was designed using a discipline of “method manufacturing”, a process Warpo coined for developing products with distinct artisanal, collectible quality.
Legends of Cthulhu is a four-figure line featuring iconic characters from the world of H.P. Lovecraft – The Professor, The Cultist, The Deep One, and Spawn of Cthulhu – created by the revered artists and sculptors who pioneered the look and feel of beloved retro action figures from the 1970s and 1980s. Each figure stands 3.75” tall, has 5 points of articulation, and comes with character-appropriate accessories. Figures will come packaged in a nostalgic, Kickstarter-exclusive blister-card, featuring original paintings by artist Ken Kelly.
“We’re creating collectible figures to sit right alongside our vintage figures from the past,” says Warpo president Bryan Katzel. “Warpo is the toy company we wanted in 1981, and our goal is to create the ‘most-bitchingest’ toys of forever!”
The Legends of Cthulhu Kickstarter launched today, with an initial fundraising goal of $60,000, and exciting stretch goals for amounts reached beyond that. To view the Kickstarter campaign, visit warpo.com/kickstarter.
About Warpo
Founded in 2013 by avid collectors and toy industry veterans Bryan Katzel, Eric LeFeber and Tommy Baldwin, Warpo is Making Yesterday’s Toys, high-quality collectible toys with a a distinct retro look and feel. Taking an artisanal approach of “method manufacturing”, Warpo’s debut product line, Legends of Cthulhu launched with a Kickstarter in June 2014, and the company’s future releases include action figures, plush, playsets, and more. For more information, visit warpo.com.