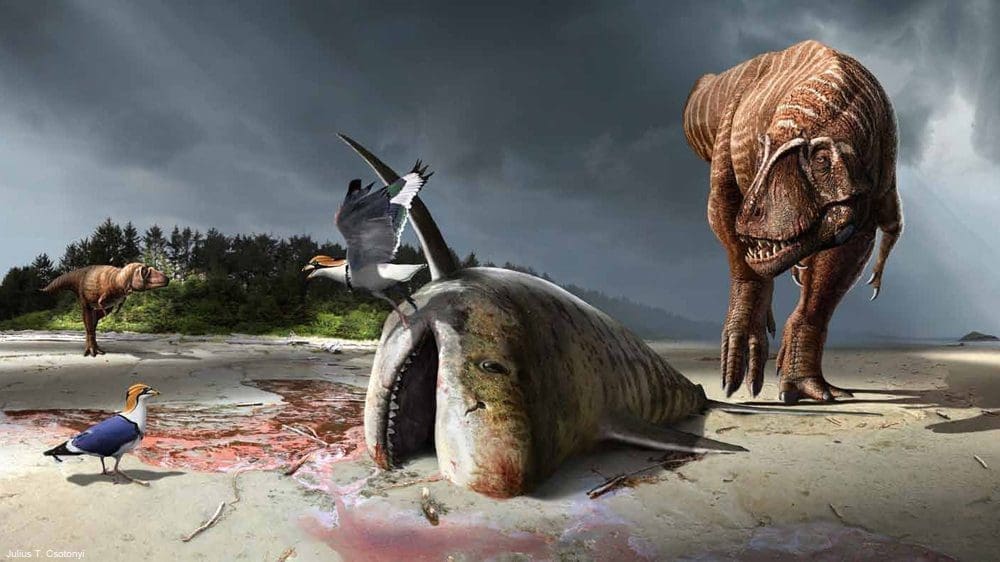 Of course you do. What kind of geek doesn’t like dinosaurs?! If you’re a dinogeek like me you’ll definitely enjoy The Paleoart of Julius Csotonyi. This lush, evocative, art book has definitely helped make my wait for Phoenix Dinocon (THIS WEEKEND 8/2!!) and Jurassic World (June 12, 2015) a little more tolerable.

At the intersection of art, science, and history, paleoartists such as Julius Csotonyi have an integral part in shaping how the general population imagines dinosaurs and other prehistoric critters. He explains, “Artwork is a great way to celebrate the wonder of scientific discovery and to disseminate it to a wider audience, and this is the main driving force behind most of my work.”

This means that yes, you will see feathered dinosaurs in this book. And while I irrationally hold on to my disdain for feathered dinosaurs (come on science, the six-foot turkey bit in Jurassic Park was supposed to be a JOKE), Csotonyi makes them look believable and realistic. Indeed, the illustration on page 114 “Utahraptor Attacking Hippodraco in Sand Dewatering Feature” shows that even with a little decorative plumage, the Utahraptor was still a fearsome beast! I particularly like the eye-spots on the jumping one, like Evil Eyes glaring at unfortunate prey from vestigial wings. Looking at this picture, seeing the Utaraptor in action, I can finally imagine dinosaurs whose feathers actually make sense and don’t look goofy. This is the way art can be so much more effective than the dry bones and drier reports, trying to explain the same concept.

Julius Csotonyi comes from a scientific background, (he has degrees in microbiology and astrobiology), which explains the dedication to detail evident in his work; many of his pieces incorporate cutting edge discoveries and years of research. However, Csotonyi does much more than flesh out fossils. A characteristic feature of his artwork is the juxtaposition of different characters to create dynamic ecosystems that capture the imagination and expand the possibilities of what prehistoric life may have been like. I’m thinking particularly of the page and a half spread of “Lythronax Investigating Squalicorax,” which, to an amateur like me, looks like “Ooh! T-Rex meets Great White Shark!” The description, however, is much more enlightening, and combined with smaller images of the work in progress, shows the progression and collaboration of art and science as research provided more details on these lesser known antecedents of familiar faces. Csotonyi primarily works digitally these days, so it is very interesting to read about his creative process and learn that these massive murals are often worked on in minuscule sections. Sometimes, for the bigger museum installations, even he can’t really appreciate the entire piece until it is installed. Csotonyi’s style is photo-realistic, which is a perfect medium to activate imaginations and shape the perceptions of what these animals looked like, for those of us who aren’t paleontologists. However, it did mean that once and a while, I ran into a piece that tipped me into a kind of dinosaurian uncanny valley. Hyperrealism is a very surreal, subjective experience, so I can’t adequately explain how or why I respond negatively to the “photoshopped” “Permian Pelycosaurs Scene,” while I felt “Mei long, First Published Specimen” looks so real, anyone can go into green wood and have find a camouflaged dinosaur there. In any case, for the majority of this book I was captivated and awed by how lifelike and interactive these pieces were, as if Csotonyi were taking pictures of a prehistoric landscape through a window in time.

It took me a long time to get through this book for the first time because I kept bringing it to my husband, exclaiming, “Look at this! I’d display this in the living room!” Julius Csotonyi is a gifted paleoartist who truly breathes life into long extinct creatures with his artwork. The Paleoart of Julius Csotonyi would be a welcome addition to any dinosaur lover’s bookshelf.

You can check out more of Julius Csotonyi’s artwork at his website: www.csotonyi.com