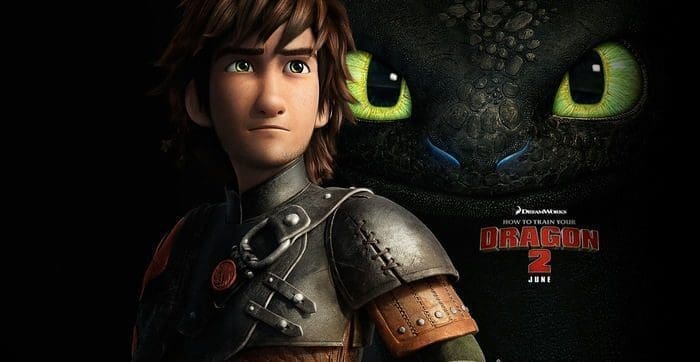 5 years after the original installment, we find the Viking Island of Berk a prosperous and happy place, with humans and dragons coexisting happily. Hiccup and Toothless are back and better than ever, adventuring out to chart new lands. On one such trip with Astrid, they discover a bizarre ice-blasted island. While investigating it, they run into Eret, a dragon trapper who’s collecting as many dragons as he can for Drago Bludvist, an insane dude building a dragon army. When Stoick, the village chief and Hiccup’s dad, orders the village to prepare for war, Hiccup flies off with Toothless and is captured by another dragon rider, Valka, who turns out to be Hiccup’s long lost mother. Together again, Hiccup tries to figure out how to save the dragons, and his home.

This is honestly one of the best sequels I’ve seen. It manages to stay true to the world without just rehashing the original movie. We get many more species of dragons, including gigantic Alpha dragons called Bewilderbeasts. We also get treated to some amazingly beautiful visuals of the lands surrounding Berk, and the clouds Hiccup flies through are spectacular. Most importantly, though, is the story. A couple of times, I was sure of what would happen next, as most movies follow the same paths, however I was pleasantly surprised to be wrong. They don’t shy away from bad things, and they don’t make the bad guy redeemable at the end. They really followed through on their vision of dragons as intelligent creatures, with one such dragon being bent to the will of Drago, and ultimately being the “bad dragon.” I dislike when dragons are used as bad pests in media, and I appreciate the multi-faceted nature of the dragons in this series. They’re not good or bad, they just are, and they can be manipulated, even controlled, by good or bad people.

I also have to admire the non-cliche 3D used. It really just served as another level to immerse in, and I don’t recall any of the gimmicky “stunts” that 3D flicks usually pull, to make sure you know it’s in 3D. You can see it with or without the 3D, though, you shouldn’t have any issues with the quality of the movie either way.

The voice acting is superb, just like the first movie, but Toothless really steals the show, again. I swear, if it were possible, I would totally get myself a Night Fury like Toothless. I left the theater wishing fervently that it were possible, and then I realized that I’m an adult, and I shouldn’t get caught up in fantasy like a little kid. And then I remembered how adorable and awesome Toothless is, and I decided that being a little immature sometimes is fine, and dangit I WANT ONE!

If you’re a fan of the first one, I don’t think you’ll be disappointed. If you haven’t seen the original, find and watch it, and then go see this one! Family fun movie of the summer right here!

About How To Train Your Dragon 2

Synopsis: When Hiccup and Toothless discover an ice cave that is home to hundreds of new wild dragons and the mysterious Dragon Rider, the two friends find themselves at the center of a battle to protect the peace.

Just watched it. It was AWESOME!!