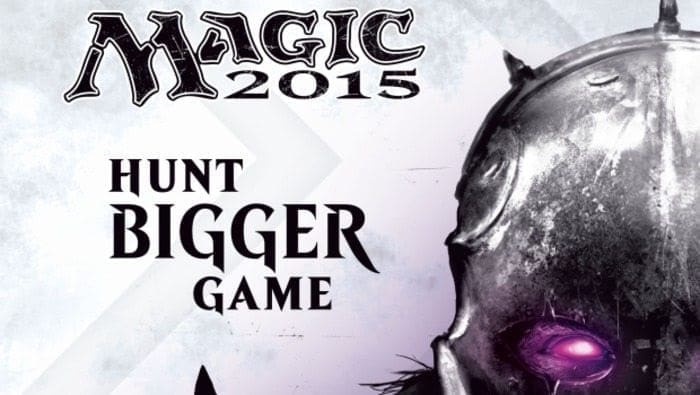 I’ve been playing Magic: The Gathering for a number of years. I’m not an expert, I’ve never played in a tournament, but I enjoy the game, and have even pulled off some fantastic feats in the past. Because I’m less “pro” and more “hobby,” I immediately loved the Duels of the Planeswalkers games. It was a fun way to get in a quick game without worrying about clearing off a table. When I heard that 2015 was going to include full-on deck building, I was really excited! That was the last time I felt that good about this game.

5.     From the very start (screen) of Magic 2015, I was disappointed. Compared to previous years, or to any actual cards, it’s so . . . lackluster. Washed out. I’ll be honest here: My wedding cake was a 4-tier, MTG-based, cake of awesomeness. Each level was a type of land, mountains, plains, forests, and islands (no swamps, because who’d wanna eat that?), and it was gorgeous. So full of textures and colors, it was a feast in more ways than one. I’m used to seeing colors and vibrancy from anything MTG, and 2015 largely fails in that area.

4.     Aesthetics aside, how did the rest of the game do, you might be asking? Well, first, stop talking to your computer screen. I can’t hear you! But it’s a good question. Unfortunately, the rest of the game is just as dull as the color scheme. Mandatory tutorial is a given, during which you get to pick one dual-color deck. I went with a White/Black “Life & Death” deck on a whim, and now I’m really wishing I’d taken the time to research the offered decks online before I chose. You can’t actually see any of the decks before you choose, you’re just given a few sentences about the theme of the deck. Granted, for pro players, or those really familiar with the newest expansions, this might not be a problem, but for anyone without a good familiarity with the current card offerings, this can break your game experience, because…

3.     You don’t get another deck. Period. Sure, they finally let you create your own deck from scratch, that’s great. But how the heck are you supposed to win enough matches, to get enough booster packs, to get enough cards to actually build an entire deck?! Grinding is a common complaint for many games, and usually playing MTG matches is really fun. Unless your one-and-only starting deck is completely feckless against the mandatory opponents you have to face… … Like a seventh turn Entreat the Angels miracle, which has you facing 5 4/4 angel tokens. Or a pack of hydras, all above 40/40, with Heroes’ Bane leading the charge, packing a 128 point punch. And do you get these amazingly OP cards after finally winning? No, you get a booster pack, usually with a lot of crap, and a cool card that doesn’t work with your current (and still only) deck.

As you might have guessed from those nice cards, some of the opponents you face are ridiculously OP. That angel thing happened to me in the last battle of the first zone. Hadn’t even beaten a zone yet, and I got to face that. Hydra-licious was the very first game in the second zone. The only reason I managed to get past either of those decks is because they got mana screwed. Angel gal only had 2 lands the whole game, and Hail Hydra couldn’t get enough out to do anything really cool. All in all, they really screwed the pooch with not giving you a couple of pre-built decks to switch between.

2.     If you do want to build decks right away, there’s a sneaky way to do it. No, it’s not the Konami code, or pulling off a 30-point Drain Life in the 3rd turn of the 2nd game. You can pay money to buy the “Premium” booster packs. $2 each, but you’ll spend nearly $40 to get them all. If you’re rolling in dough and think that’s a steal, good for you. (Also, feel free to send me money, you filthy Richie Rich, you.) But if you’re like me, you don’t wanna spend cold hard cash to buy cards you can eventually unlock. Maybe. I’ve only gotten one premium booster from winning a match so far, but there were a couple of nice, useful cards in it. It ties in to the deck thing, but it’s important enough to be it’s own entry, because I really can’t stand micro-transactions. At all.

1.     Last but not least, and the thing I’m probably most upset about: THEY TOOK AWAY MY PUZZLES!!!!

Not only were these great brain-teasers, but they were a great way to teach new-ish players about tactics, strategy, timing, and particular game mechanics. And really, they were so much fun! I get that they addressed the consumer’s request for full-fledged deck building, but the fact that they ditched Two-Headed Giant and all the Puzzles really has me disappointed.

All in all, I think I’m going to be replaying previous versions of MTG: Duels of the Planeswalkers, rather than waste anymore time and frustration on 2015.

**Note: I was given a promotional copy of this game to review.

The MTG Deck Lab: A Night Out with the Vampires