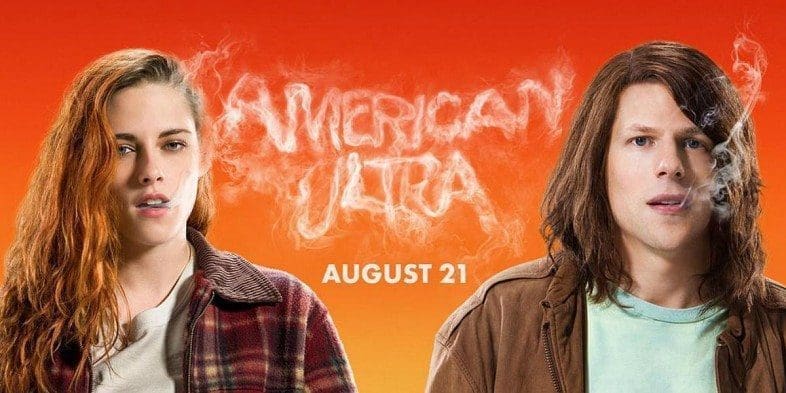 Jesse Eisenberg and Kristen Stewart are pretty familiar with one another. The duo first teamed up for Adventureland, and now they’re back together for American Ultra. Oddly enough, if you told me they were playing the same characters, I might actually believe you. American Ultra is a film about two stoners who turn out to be quite a bit more than 420-friendly 20-somethings.

The film is a mix of genres, offering a lot of stoner comedy, a bit of spy espionage and probably more stupid comedy than you’re hoping for. Sometimes this mixture of genres works out really well, but more often than not it just comes out average at best. Eisenberg plays Mike Howell, who is your typical stoner as portrayed in most modern films. He has a dead end job at a convenience store, draws comics that have never been published, and smokes a lot of weed.

Stewart takes on the role of Howell’s girlfriend, Phoebe Larson. She’s the sane one in the relationship. While she also partakes in the ganja, she has a slightly more stable job and basically keeps the relationship going despite Howell’s constant ability to mess things up. Again, these are fairly familiar roles for Stewart and Eisenberg, and they should be familiar to audiences as well, especially if you’ve seen other stoner comedies in the past.

What sets American Ultra apart from other stoner comedies is the fusion of genres we previously mentioned. It’s not long into the movie that Howell goes from failed stoner to super spy… stoner. Yes, he doesn’t quite make a full transition, which is where part of the humor comes into play. Imagine a stoner with moves like Jason Bourne and you’ll start to get an idea of where this movie is headed.

On the CIA side of this film you’ve got Topher Grace as Adrian Yates, a CIA agent who’s heading up a mission to take out Howell. Meanwhile, Connie Britton plays CIA agent Victoria Lasseter, a rival to Yates who gets in the way of his efforts to handle Howell. If that weren’t enough, Arrested Development alumni, Tony Hale, chimes in as another lower grade CIA agent that essentially takes orders from the other two.

There’s a good portion of the film that works, but there’s also a lot that falls flat or simply doesn’t work at all. There were a number of times in which the audience was clearly supposed to laugh, but instead the theater was quiet. Likewise, there were a number of big laughs. If you like stupid comedies that almost require you to turn off your brain, you’ll probably enjoy American Ultra a bit more than the average moviegoer. However, if you prefer more intelligent humor or don’t like stoner comedies at all, then you probably won’t get much out of the film.

Once Howell becomes a super agent, the film definitely picks up, but it just doesn’t quite hit the mark. Everything just feels a bit forced and even a little fake at times, especially when the CIA agents are involved. When it’s just Howell and Larson, things work a bit better as Eisenberg and Stewart definitely have good on-screen chemistry. In the end, American Ultra is a film that isn’t terrible, but it doesn’t really offer much to get excited about. If you don’t catch it until Red Box, you won’t be missing out on much.

Synopsis: A stoner – who is in fact a government agent – is marked as a liability and targeted for extermination. But he’s too well-trained and too high for them to handle.