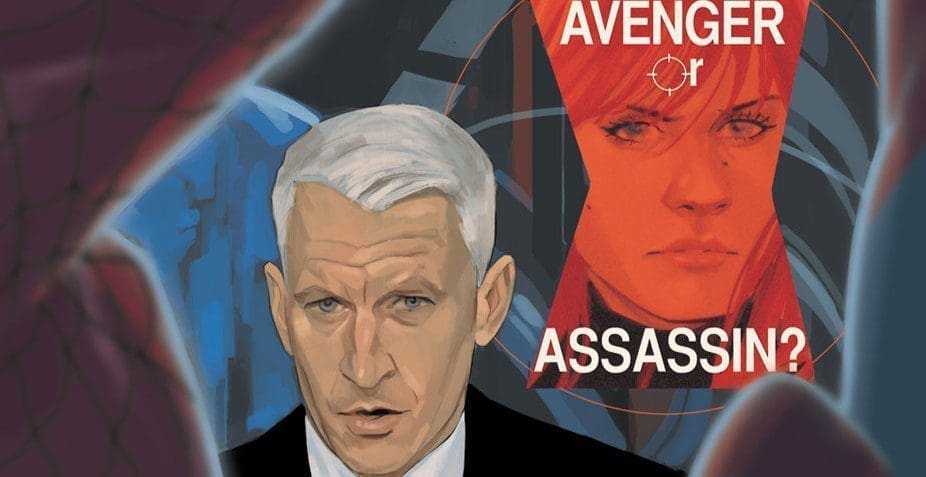 This November, CNN’s own Anderson Cooper makes his Marvel Universe debut for a special, Marvel Comics only, investigative report that begs the question – is the Black Widow truly the Avenger we want? It all happens in BLACK WIDOW #12, as the world renowned journalist and news anchor exposes the tangled web of the Widow’s past discretions, courtesy of critically acclaimed creators Nathan Edmondson and Phil Noto.

Though she now walks a righteous path in her quest for atonement, her past is paved with bloody memories. Though allegedly reformed, is a former KGB operative and assassin the right Avenger to protect the American people? Where do her allegiances truly lie? Those questions and more will be answered in November’s issue!

“It’s Anderson doing what he does best: looking for the truth and reporting on events,” says series writer Nathan Edmondson in an interview with Marvel.com. “We imagine that in Black Widow’s world, as would be the case with many other Avengers, things she does can’t be ignored by the media and all it takes is somebody who knows how to ask the right questions to make her world very uncomfortable for her but in a way that is perhaps not unjust.”

Currently the anchor on CNN’s Anderson Cooper 360°, the Emmy Award winning Cooper has spent many years broadcasting from around the world, reporting on up-to-the-minute news and current events.

“I found that he was a comic book fan and reader and shared some of my work with him over a year ago,” adds Edmondson on his inclusion of Cooper in BLACK WIDOW #12. “Then as we were strategizing upcoming issues of Black Widow I had this idea for an opportunity to involve him directly in the book. He was thrilled with the idea.”

Once a resident of the shadows, the Black Widow’s operations have been brought into the light like never before. With the investigation into her actions underway, what will the Avengers do when they learn how she’s been spending her days off? Find out when Anderson Cooper makes his Marvel Universe debut in BLACK WIDOW #12 this November!