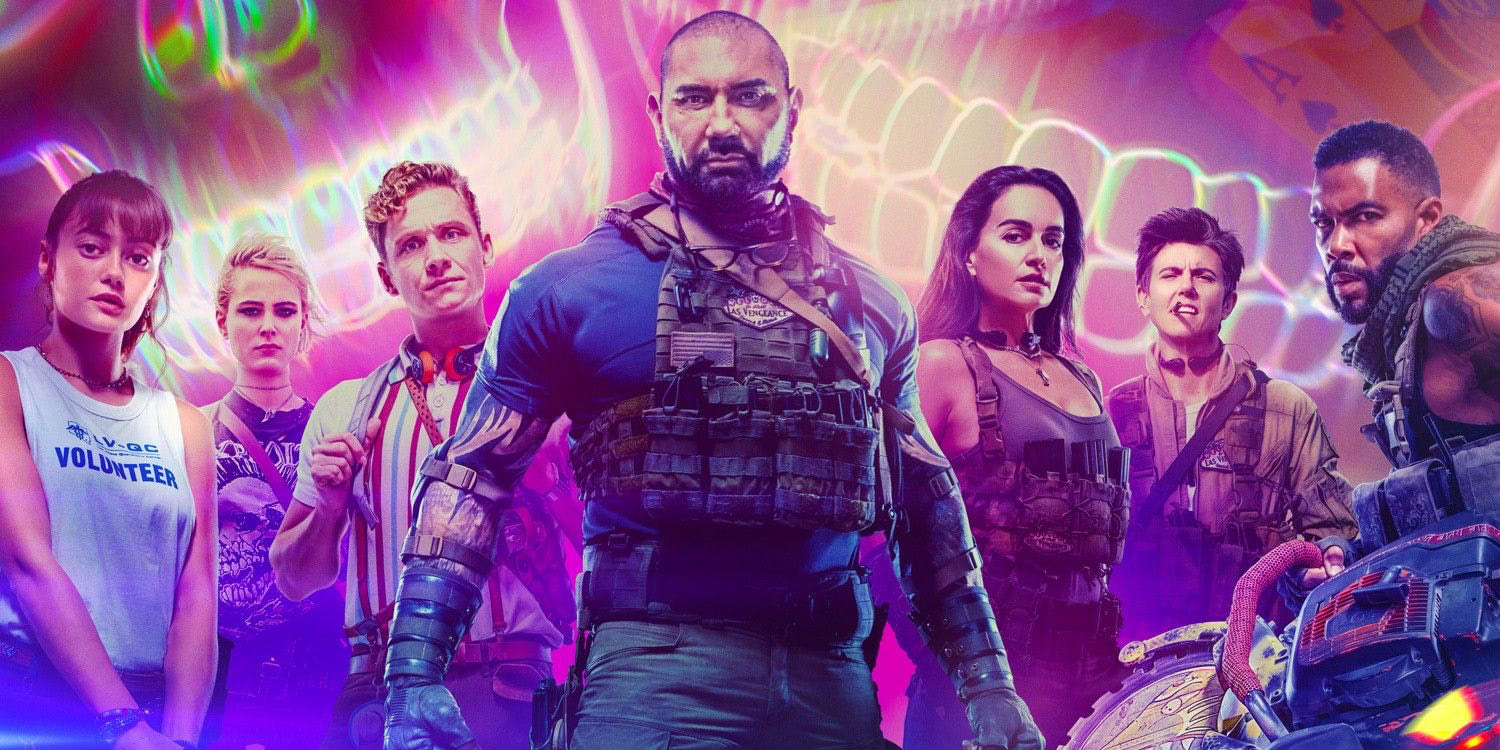 Don’t Bet On This Subpar Mess

Warning: There may be a spoiler or two in this review, but I can’t really recommend this movie, so I think I’m doing you a favor, really.

Slowly, but steadily, I’m learning that Netflix is incredibly adept at churning out only subpar to slightly above-average movies. Army of the Dead, one of Netflix’s newest offerings, is closer to the former than the latter.

The setup is simple. Zombies have taken over the Las Vegas strip. After the local populace, law enforcement, and the military fail to stop the zombie horde, the powers that be decide to wall in the city with storage containers and nuke the whole shebang.

You’d think that would be case closed, but that wouldn’t make a pretty short movie. No, the real story comes when one of the “local populace” who survived the zombie hordes, Scott Ward (played with true…well…just played by Dave Bautista), is approached by stereotypical Asian Yakuza-esque villain Hiroyuki Sanada (played as one-dimensionally as the script writes him by Bly Tanaka) with a…business deal (dun…dun…DUNNNNNN). You see, Mr. Sanada has something to do with a hotel/casino that has 200 million dollars in its vault. You also see, Mr. Sanada has already been insured for the money, so he “hires” Scott to assemble a team to brave the zombies, get the money, and earn a cool 50 million for his troubles. Oh yeah, and Scott works at a hamburger restaurant. See how I shoehorned that into this paragraph? Yeah, that’s how it’s shoehorned into the script.

So, Scott assembles a team of relatively one-dimensional stereotypes played by actors who you know from much better roles in other stuff. Scott’s second-in-command is Maria Cruz (the lovely and talented Ana de la Reguera, who is delightful evil in Goliath on Amazon Prime, which I highly recommend), who fought beside Scott on the zombie-infested Strip. Joining the two of them is Vanderohe (played by Omari Hardwick, who I’d rather watch in Kick-Ass again); he also toted a giant chainsaw to help Scott during the early stages of the zombie infestation…too bad that chainsaw wasn’t ever used again, except for a site gag. There are other characters, too: a goofy, oblivious German safecracker; a hard-ass coyote (who gets people into The Strip to…I don’t know what); two thrill-seeking social media celebrities who are adept at killing zombies…one that’s fleshed out a bit and one that you know is going to die pretty quickly; Sanada’s henchman, who couldn’t be more blatant if he had a twirly mustache; a jackass cop who’s clearly going to be the first to go (That is NOT a spoiler, trust me.); and a wisecracking helicopter pilot, played with actual competence by Tig Notaro, who I learned took the place of the original wisecracking helicopter pilot because he did some creepy shit.

There are a few other characters that seem shoehorned in…especially Scott’s daughter and some other woman who needs to get into The Strip to get money for something or another. These side plots are horrible and make for some of the more painful parts of the movie. Nothing says, “We need to get this done and get the hell out of here,” then a 15-minute father-and-daughter talk about where dad’s been for the last…however long…I don’t even remember.

Anyway, after the team is assembled, we get some funny inter-team banter during the “prepare for the heist” scenes ala Ocean’s Eleven (including an actually kinda’ funny bit about how the Japanese gangster shouldn’t say, “easy peasy Japan-easy” because it’s racist…but he’s Japanese, so…okay, maybe it’s not that funny). From there, the team enters The Undead Strip; there’s some odd rapid-fire expository sequence from the coyote lady about how things work in Zombieland (but not THAT Zombieland, which was a far better movie than this); the team fights through a bunch of zombies; we meet some mega-zombies who are apparently smart enough to move out of the way of bullets and make metal helmets to protect their brains; and stuff…I don’t know…the coyote woman explained things too quickly and I was getting bored. Again, I don’t mind some well-thought-out stuff in my zombie movies, but anything that seems well thought out in this movie seems to be blown through quickly in order to toss some more subpar CGI at you or pan out to another CGI image of a Las Vegas Strip that looks about as real as New Vegas in the Fallout game of the same name. Just substitute out Ultra-Luxe for Olympus in this case. Funny thing is, the backstory for the Ultra-Luxe in Fallout: New Vegas is actually better than most of the backstory in this movie.

I really wanted to like Army of the Dead. In general, I like zombie movies. This one had a lot of potential. Zack Snyder is a director I’ve actually heard of, the premise seemed decent enough, and the cast had a few familiar faces. My optimism lasted about as long as the soldiers in the opening sequence.  Oops, spoilers that the dude-bro soldiers transporting the super-secret mystery…thing…in the opening sequence don’t last long.  Sorry.

Well, other than the fact that the movie started with an incredible “Zombies Taking Over Las Vegas” montage complete with a zombie Elvis, topless zombie showgirls, a soccer mom mowing down scores of the undead, and Richard Cheese singing an amazing rendition of Viva Las Vegas, this movie was pretty mediocre…a C-minus at best. Sure, there were some bright spots…the action was decent in chunks (pun intended), Tig Notaro and Matthias Schweighöfer (who played the safecracker) added some funny bits of brevity, one of the characters who was barely fleshed out at all has an awesome “last stand” fight, and a CGI zombie tiger is pretty cool, but that’s about where the good ended. The rest of the movie was filled with regular movie clichés (Seriously, the whole thing where you juxtapose cool, hip, low-key music to over-the-top violence was done 100 times better in Nobody and about 10 other movies I can name off the top of my head), zombie movie clichés (I bet that guy who’s a goner is going to use a grenade to take 30 zombies with him! I bet the douchebag who thinks he’s gotten away with his double-cross isn’t really going to get away with it!), weird social and political commentary that wasn’t dedicated enough to be impactful or sly enough to be clever (The president wants to nuke Vegas on July 4th because it’ll be “Really cool and the ultimate fireworks show,” and, “actually kind of patriotic if you think about it.” Guess who they’re making fun of there?), half-baked ideas that might’ve been cool if they were fleshed out a bit (I won’t ruin the origin story of the zombies…but it sorta’ fizzles out about halfway through.), a totally forced father-daughter relationship angle that was terrible, and logic that’s stupid even for a zombie movie.  For example, when you offer a guy $50,000 to help you fight thousands of undead while you’re making $50 million, don’t you think that guy is going to be PISSED when he sees how much money you’re actually stealing?  Also, seriously, how were they going to fit $200 million dollars and a dozen people on a helicopter that looks like was made circa World War I? And for those of you who’re saying, “That’s the point; they were never meant to escape,” then why the hell have a chopper up there at all?!? And wouldn’t Scott and his team at least scope out the helicopter and say, “Hey, we’re not doing this if we’re using a helicopter that was used on an episode of M*A*S*H!”

Anyway, I can’t recommend this two-and-a-half-hour slog to anyone but diehard zombie movie fans and people who really love what Zack Snyder brings to the table. I guess it isn’t terrible, but there are at least 10 zombie movies I can think of that are better…hell, even Scouts Guide to the Zombie Apocalypse stayed true to its low-brow humor, had some funny action spots, and didn’t try to shoehorn in comments on society or family drama just for the hell of it. It was just a stupid-funny zombie movie that you didn’t have to think so hard about.

So, if you have a few hundred minutes to spare and you like mediocre zombie flicks, by all means, give Army of the Dead a shot. If you love Zack Snyder, zombie movies, and Richard Cheese, do yourself a favor and watch the far better Dawn of the Dead instead. It’s more fun and it has Phil Dunphy playing an asshole!  Win-win!

About ARMY OF THE DEAD

Synopsis: Zack Snyder returns to the zombie genre with this less-than-stellar romp through a Las Vegas overrun by the undead. Unfortunately, there are at least a dozen zombie movies that are readily available that are better than this.