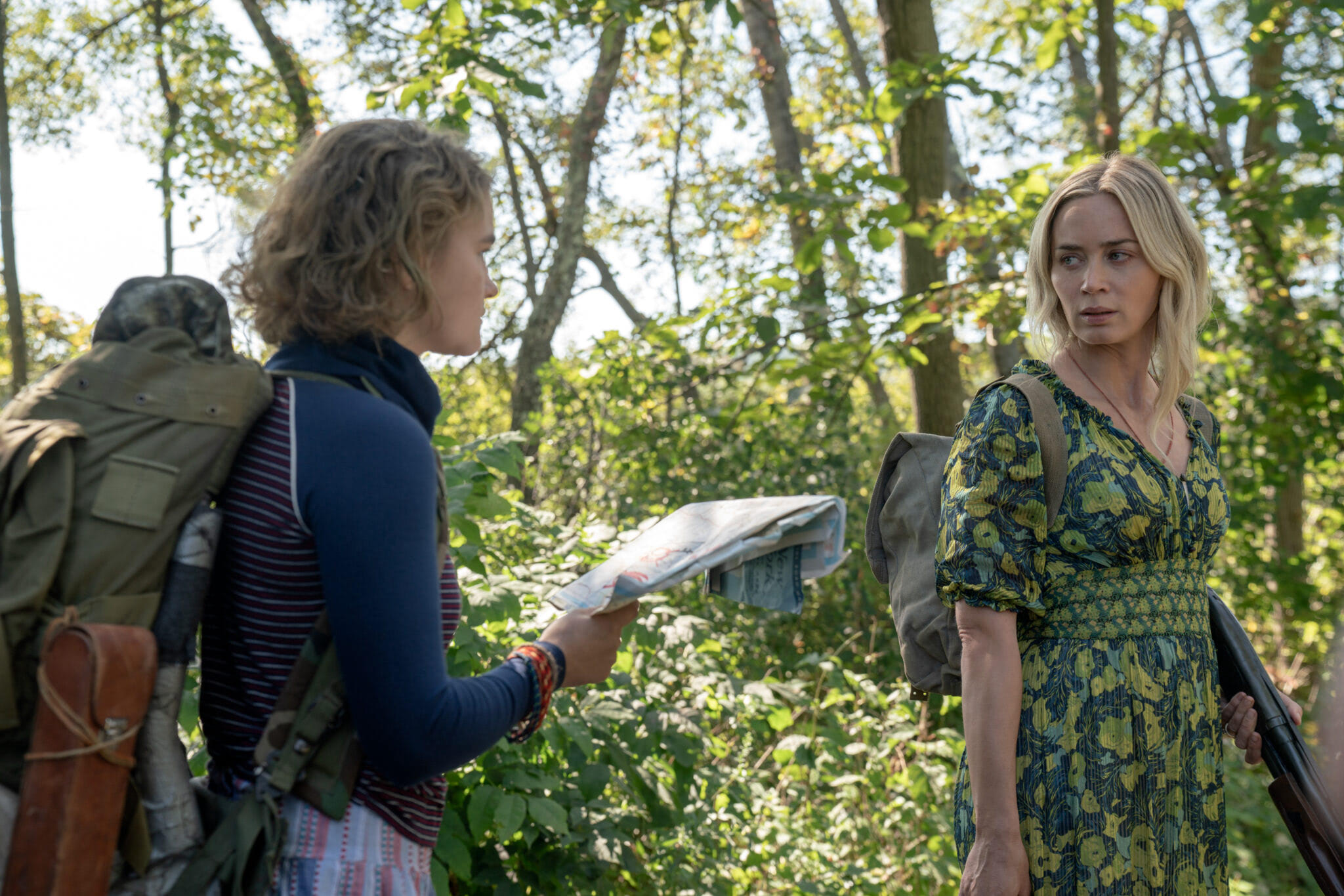 Sound is a pivotal element in horror films. Whether it’s to build suspense or have an audience leap out of their seats, sound effects and music can immediately pull the viewer into the story and make us empathize with our characters. We care what happens to them. While it’s entertaining for us, sound is also both a blessing and a curse for our protagonists. It can give away their position when a monster is lurking nearby, but it can also help them strategize a plan of attack. In the case of the newest installment of the A Quiet Place franchise, sound may be their best weapon.

In A Quiet Place Part II, directed by John Krasinski, following the death of her husband Lee(Krasinski) and the destruction of their farm, Evelyn(Emily Blunt) must find a new location to keep her children safe. The addition of her newborn baby complicates matters as they are still forced to avoid making any noise on their journey for fear of inviting the deadly aliens plaguing the planet. The aliens are too fast, and their exterior too strong, for any conventional weapon to work. Fortunately, they have a new tool in their inventory. Her daughter Regan’s hearing aid. They discovered that the sound her aid emits, when amplified through a speaker, can incapacitate an alien long enough for them to find its weak spot and take it out. It’s an inspiring turn in this apocalypse that could bring relief to the remaining human survivors.

After a series of setbacks, Evelyn meets a nearby neighbor named Emmett, who provides shelter for the time being. With the entire family unable to proceed any further, Regan(Millicent Simmonds) decides to venture out alone in the hopes of setting her plan to stop the aliens into motion. Emmett reluctantly agrees to help her but warns that there are people out there to avoid. The fate of Regan, her family, and perhaps everyone rests on her ears. Meanwhile, Evelyn and her son Marcus(Noah Jupe) have other challenges to worry about.

It’s been over 14 months since this movie was originally supposed to be released. Despite that incredibly long delay, I’d say it was worth the wait. As soon as the movie starts, it’s like we never left this world. The tone and execution make this sequel feel like an extension of the original. We get a reminder of what we are dealing with and then we move forward into the unknown. It’s the familiar story of survival that we gravitate towards. A mother who will brave anything to keep her family alive and now children who are strong enough to do the same.

Emily Blunt was the highlight of the first A Quiet Place, and she definitely has her scenes in this movie too, but this time around it’s the kids who shine. John Krasinski’s inspiration and reason for making a sequel were Regan, or more specifically Millicent Simmonds. He wanted this actress, who is deaf in real life, to drive the story and it was a brilliant move. Not only are we rooting for her success, but her handicap makes the tense moments in this movie that much more engaging. Going anywhere in this new world is dangerous, but being unable to hear the approaching aliens adds another layer of danger for us to grip our seats over. Millicent Simmons and Noah Jupe give terrific performances and hold their own next to Emily Blunt.

The absence of John Krasinski and the father figure role is sorted out with the addition of Cillian Murphy. His portrayal of Emmett is strong and heartfelt. We get very little of his backstory, but as we learn what happens along the way it makes us both sympathetic and apprehensive. Aliens are predictable, but humans are not. I enjoyed his interactions with Millicent and their journey together.

Once again I can’t understate the importance of sound in this movie. Aside from one or two jump scares, the overall atmosphere was designed with sound in mind. Whether it’s with the whispered dialogue, the carefully placed footsteps, opening a door, or just moving in general, there was hardly a scene that wasn’t filled with imminent terror. Especially when the sound is removed in some of Regan’s scenes and we are living in her shoes. Only able to ascertain the threat that is in front, or periphery, of our eyes.

There are more action sequences in this movie, but, like the first film, they are clever in their execution. Any loud noise, from water to an explosion, can help distract an alien. It may not be enough to kill them, but it might provide you with time to figure out your next move. Watching our characters think on their feet is very entertaining. At times the horror is tempered by this feeling of adventure. Mortal danger can be fun. Who knew?

There is one story beat in this film that I felt was a plot convenience, but it doesn’t take away from or ruin the overall enjoyment of the movie.

A Quiet Place Part II is a sequel that rivals its predecessor and does so with an even greater emphasis on future installments. John Krasinski has crafted another winner and continues to make me look forward to more from him. Emily Blunt is amazing as always, but I give full marks to Noah Jupe, Millicent Simmonds, and Cillian Murphy. The depth of their characters strengthens this film and provides the emotional tether within all the horror and action moments. The editing is outstanding and the cinematography is beautiful. I should also point out the brilliant score by Marco Beltrami. If the sound effects are the weapon of this movie, the score is the ammunition. Thrilling and comforting all at once. When something happens that scares you, the score reminds you to calm down or get ready cause it’s only going to get worse. I recommend seeing this in theaters with friends and family, safely, because this is a film experience you should share with other people on a large screen with big speakers.

About A QUIET PLACE PART II

Synopsis:  Following the events at home, the Abbott family now face the terrors of the outside world. Forced to venture into the unknown, they realize the creatures that hunt by sound are not the only threats lurking beyond the sand path.